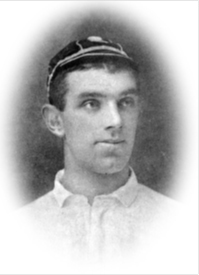 William Moore Bell Nanson was born in Carlisle. He was one of seven children of Charles James Nanson and his wife Elizabeth. His father was a slater and slate merchant and, after attending the local Lowther Street School, William followed in his footsteps. At the time of the Boer War he joined the 1st Volunteer Battalion of the Border Regiment and served in South Africa, being awarded the Queen's Medal with three clasps, and the King's Medal with two clasps. He was invalided home and married Margaret McEwan in Carlisle in 1905, with whom he had children Marjorie and Charles. In that era rugby union in Cumberland had suffered following the split that eventually became today's rugby league. Nanson however kept faith with his union club at Carlisle and, in 1907, gained his two England caps. He scored a try in the convincing win over France at Richmond, but after a 22-0 defeat by Wales in Swansea the following week was not selected again. By 1908 he had moved 100 miles south to Oldham and switched codes to rugby league. In his first year with Oldham he played 28 times, and also represented Cumberland RL in a pioneering match against an Australian touring side. These were successful days for Oldham, but for Nanson the only honour was as part of the team that finished runners-up to Wigan in the Lancashire Cup. In the following season, now aged 30, Nanson was injured and missed out on further chances to shine with Oldham. His career ended playing the League code for both Coventry and Todmorden before retiring to his slating. When war came he quickly volunteered, this time with the Manchester Regiment. After training he left with the 10th Battalion for Egypt in September 1914, and took part the following February in the defence of the Suez Canal against Turkish attack. In May they moved Gallipoli and in early June, as part of the 42nd Division, took part in the action to capture the dominating heights around the village of Krithia. Although this was judged to be one of the more successful actions of the campaign in Gallipoli, it did not prevent heavy losses. It was 13 months before William Nanson was officially declared dead. Sergeant WILLIAM MOORE BELL NANSON has no known resting place. He is remembered on grave panel 158-170 of the Helles Memorial on the Gallipoli Peninsula, and on the civic war memorial in Oldham.