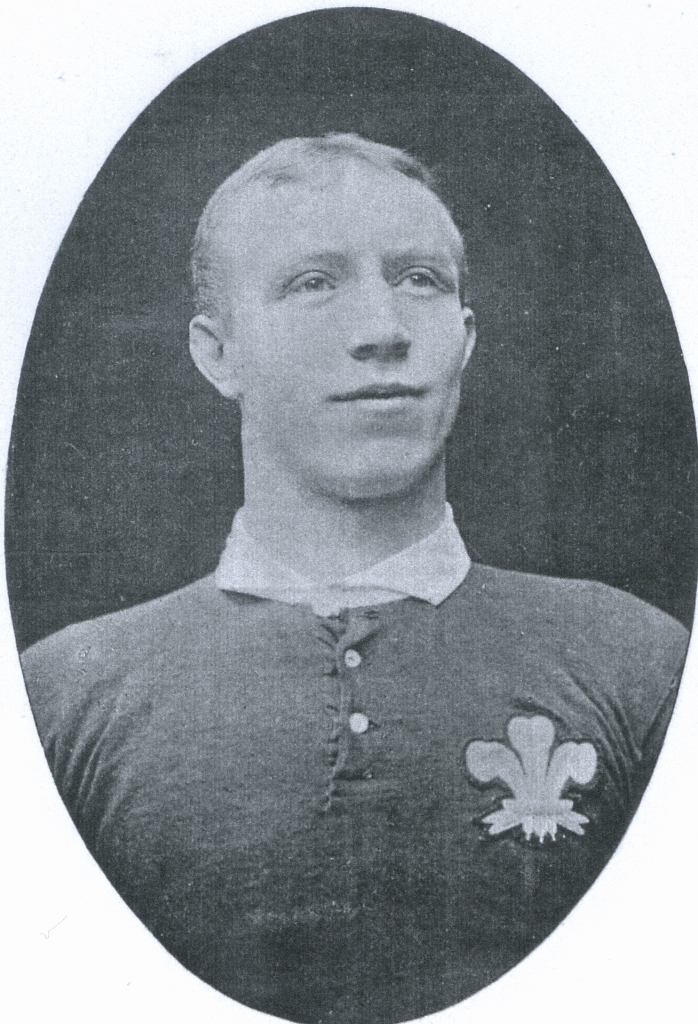 Company Sergeant Major Dick Thomas was killed during the early stages of the Battle of the Somme, while bravely leading his men in the initial attack on Mametz Wood on the 7th July 1916. A policeman in civilian life, and a well-known Welsh rugby international, his passing must have been especially keenly felt, not just by his family, friends and comrades in arms, but by the whole of the Welsh sporting community.

Dick was born into a mining family in Ferndale, Rhondda, and although he initially worked underground, he subsequently joined the Glamorgan Police and rose to the rank of sergeant. He began his adult rugby career with his village team, but quickly moved on to a more senior Rhondda club, Penygraig. He soon began to impress the Welsh selectors, and in 1904-5 he was reserve forward for all three of Wales's internationals. He also had a few games for Cardiff that season, but after he joined the police force he was posted to the Cynon Valley. There he joined Mountain Ash who, like Penygraig, played in the Glamorgan League, a fiercely contested competition for valley clubs. Not that this bothered Dick much. He was a tough forward with a reputation for being able to take and give knocks. We "would sooner face any man than Dick Thomas" wrote one old opponent. But, despite being a hard-working scrummager and a fearless tackler, Dick also possessed good all round footballing skills and he demonstrated his versatility by appearing regularly at halfback or threequarter for the Glamorgan Police team. Right up to his retirement - and this was a time when the press often overlooked the contribution of individual forwards - Dick was frequently referred to in match reports as one of the outstanding players. Throughout his career, Dick was a regular in the Glamorgan County XV and he played for them against New Zealand (when he was "head and shoulders above any other forward"), South Africa and Australia. It was following a fine display for the county against the 1906 Springboks that he was awarded his first cap against South Africa a few weeks later. Dick went on to play three more times for Wales in 1907-8 and 1908-9. Serious illness and injury denied him more caps, but he still managed to play in two successive Grand Slam winning teams. In 1911, following another posting, Dick transferred to the Bridgend club and he continued to play - and play well - for them, and for Glamorgan Police, right up to 1914. He was also a talented boxer, and he won the Glamorgan Police heavyweight boxing title three times. Just six months before the outbreak of the war, he reached the heavyweight final of the Welsh Amateur Championships, although he lost to a much younger opponent. Dick's grandson, another Richard Thomas, has recently located his grandfather's birth certificate, which reveals that his date of birth was 14th October 1880 - three years earlier than suggested in most accounts of Dick's life. This emphasises the longevity of Dick's sporting career. The discovery of the birth certificate also resolves the question of Dick's exact names. For some years, he has been widely, but incorrectly, referred to as 'Edward John' or 'Edward John Richard' Thomas, but he was in fact registered as just 'Richard Thomas'. Evidently this mistake arose long after his death, when his military record was confused with that of another Welshman, an 'Edward John Thomas' who was killed on exactly the same day in the Battle of the Somme.

With the coming of war, Dick enlisted in the 16th Battalion (Cardiff City) Welsh Regiment and was soon promoted to Company Sergeant Major. This unit was full of rugby players, so he found himself serving alongside many former teammates and opponents. Six days after the opening of the Battle of the Somme, the 38th (Welsh) Division were given the task of capturing Mametz Wood. The City Battalion, together with the 11th Battalion South Wales Borderers, were selected to spearhead the initial attack on the wood on the 7th July. The plan, however, was ill-conceived and stood little chance of success. The Germans were well dug in at the edge of the wood as well as on the right flank of the attackers. The artillery failed to neutralise the enemy's machine guns, while the promised covering smoke never materialised. The attack was held up well before the men could get into the wood and the 16th Welsh suffered terribly from both frontal and enfilade fire. Company Sergeant Major Richard Thomas was one of nearly 140 from his battalion who were killed in the doomed assault. Mametz Wood was eventually captured five days later after much bloodshed. The commanding officer of the 16th Welsh, Lieutenant Colonel Fred Smith, a Welsh trialist and an old teammate of Dick's, wrote to his widow, "My old friend Dick was killed while attacking a wood … I had already recommended him for a MC for his gallantry and splendid example to his men". However, Dick never received the decoration: at that time, the Military Cross could not be awarded posthumously. A Welsh selector later wrote of Dick, "He died as he had always lived, a great hero." Richard Thomas is commemorated on the Thiepval Memorial to the Missing of the Somme, and a new building has recently been named in his honour at the Bridgend headquarters of the South Wales Police. I should like to thank Richard and Margaret Thomas, John Jenkins and Gareth Madge for their help in researching this article.