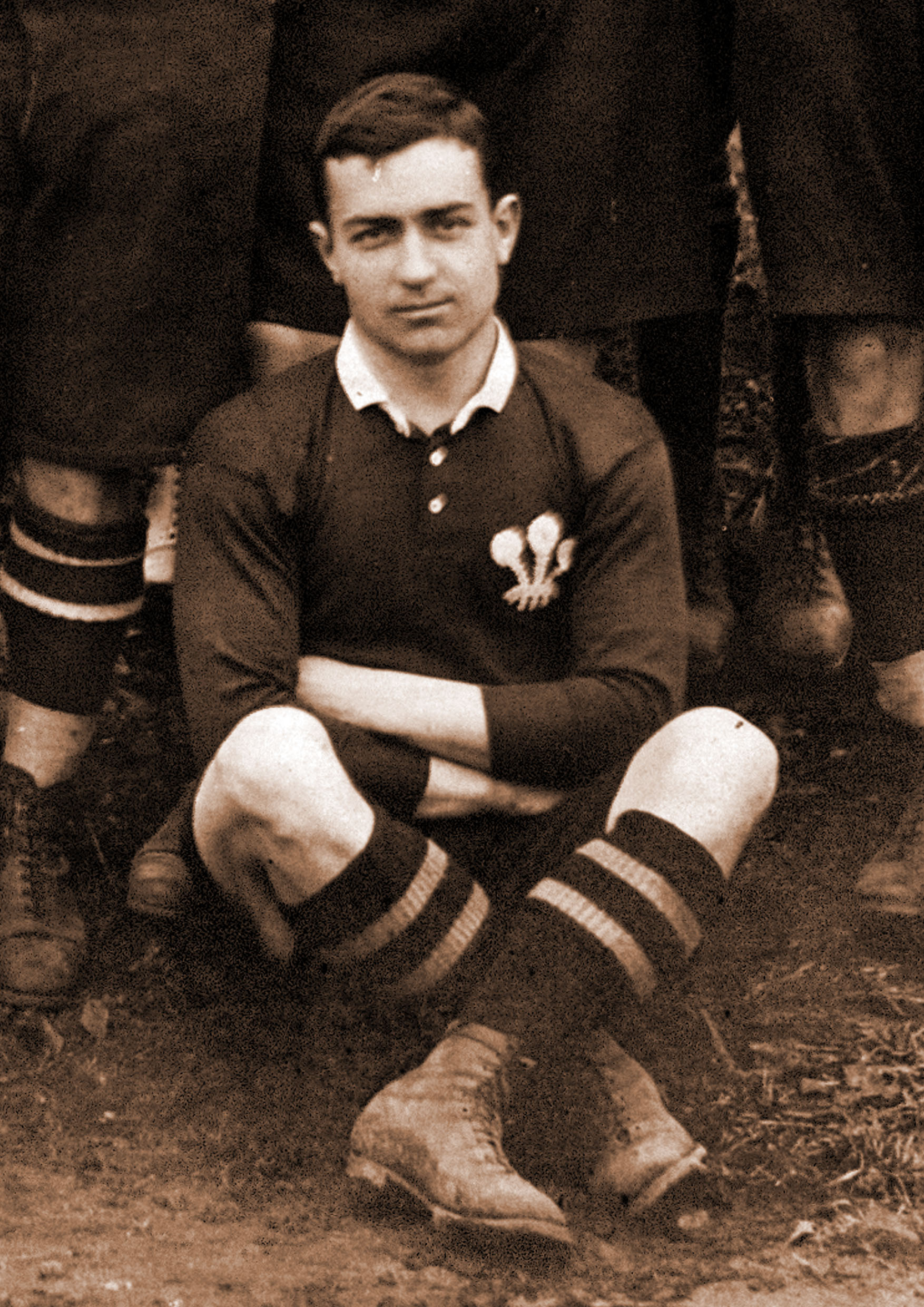 Arguably no sport requires such a wide and varied range of skills as rugby. It isn't surprising, therefore, that many of the best exponents of the game have also been good at other sports. And of all the Welsh sportsmen who died during the Great War, there was possibly no more talented all-rounder than "Lou" Phillips. After all, Lou represented Wales at three sports ̶ water-polo and golf, as well as rugby ̶ and he played Minor Counties cricket for Monmouthshire. He was also a champion swimmer. His debut international rugby season, 1899-1900, heralded what has become known as Wales's "First Golden Era", twelve seasons of unprecedented success. Yet, despite this, he was extremely modest and was never known to boast about his many sporting achievements. Born in Newport in 1878, Lou's all-round talents first became apparent at Monmouth School, and by the age of nineteen, he was playing regularly at half-back for Newport. There he developed an almost perfect understanding with G Llewellyn Lloyd who won twelve caps for Wales between 1896 and 1903. Such was their almost uncanny awareness of each other's play, they would often inter-change their half-back roles, though Lou tended to concentrate more on scrum-half. After only a couple of seasons together, Lloyd and Phillips were regarded by some as the most effective half-back pairing in the Kingdom. Any forward would have been happy to play in front of a half-back like Lou. He passed, kicked and tackled well, ran determinedly and was described as "one of those great-hearted players who refuse to give up even when the position seems hopeless". At last his chance with Wales came in the match against England at Gloucester in January 1900. He and Lloyd outwitted and outplayed their opposite numbers as Wales recorded a well-deserved 13-3 victory. With Lou in brilliant form, Wales went on to win only their second-ever Triple Crown. For Wales, much more was to come. Five further Triple Crowns followed over the next eleven years but, sadly, Lou was unable to enjoy this success. Over Christmas 1900, he badly injured his knee in a Newport club match. As a result, Lou had to miss the England game a few weeks later, but he was unwisely prevailed upon to play against Scotland for his fourth cap. This was an understandable but serious mistake on the part of the selectors, as Lou broke down after only ten minutes. Typically though, he refused to leave the field, which only aggravated his injury. Inexplicably, the Welsh captain made matters worse by keeping him at half-back, where he was cruelly exposed to the marauding Scottish forwards. Scotland won 18-8 and the chance of a first-ever successive Triple Crown was gone. He was replaced for the Ireland match by Swansea's Dickie Owen who, over the next eleven years, went on to establish himself as one of the greatest scrum-halves ever to play the game. On the other hand, however, Lou's brilliant rugby career had ended at the tragically early age of twenty-two. But, undaunted, Lou then decided to take up golf and he applied himself so well at his new sport that he became the leading amateur golfer in pre-war Wales. He won the Welsh Championship in 1907 and 1912, reached the final of the Irish Amateur Open in 1913 and made the last eight of the Amateur Championship held at Sandwich in 1914.

Lou qualified as an architect in 1907 and was practising in Newport when war broke out in 1914. At thirty-six, he was over the age limit at that time, but he still immediately enlisted in the Public Schools Brigade, joining the 20th Battalion The Royal Fusiliers. Given their background, many of the volunteers for this Brigade later became officers, but the self-effacing Lou refused a commission. He did, however, accept promotion to sergeant. In March 1916, the 20th Royal Fusiliers were in the line near La Bassée at Cuinchy. On the night of the 14th he was with a wiring-party out in no man's land, when he was shot in the chest and killed, another brave victim of the casual attrition which was the daily experience of life on the Western Front. Although he is often mistakenly said to have died at Cambrai ̶ which is over forty miles to the south ̶ ­­Lou Phillips is buried between Béthune and La Bassée in the Churchyard Extension at Cambrin. As the Welsh public opened their copies of the South Wales Argus a few days later, they were faced with the headline, "Great Athlete Killed". It was no exaggeration.

About the Author: Gwyn Prescott is a Cardiff based rugby historian and writer. His latest book 'Call Them to Remembrance': The Welsh Rugby Internationals who Died in the Great War is available through publishers St. David's Pressand from Amazon.