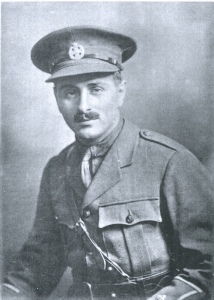 Horace Wyndham Thomas was that very rare combination: not only a gifted Cambridge choral scholar, but also a brilliant Welsh international rugby player. Press reports of his games for Blackheath or Cambridge University - he played almost all his senior rugby in England - demonstrated that Wyndham was one of the most exciting and intuitive attacking outside-halves of his time. Sadly, however, because of work commitments and then the outbreak of war, he was unable to fulfill his outstanding potential. Wyndham was born in 1890 in Pentyrch near Cardiff. He began playing rugby at Bridgend County School, where he was described by the headmaster as "the best character we ever had here". In 1906, he won a scholarship to Monmouth School, where he represented the school not just at rugby but also at cricket, hockey, gymnastics and athletics. Possessed with an exceptionally fine singing voice, he won a prestigious choral scholarship to King's College Cambridge in 1909. It is unlikely that any Cambridge undergraduate enjoyed a fuller life, for this included services in King's Chapel with the college choir; performances with university music and drama societies; cricket for King's and the university second XI; and of course, rugby for King's and for the Light Blues. College reports confirm that he was very popular with his tutors and fellow students, and universally admired for his modesty.

During his three years at Cambridge, Wyndham's main rugby club outside the university was Blackheath, although he also played a couple of times for London Welsh. Selected to play for Cambridge against Oxford in December 1911, he was forced to drop out at the last minute due to injury. However, despite this disappointing setback, further honours came in the Christmas vacation when he took part in the Barbarians tour matches at Newport and Leicester. Over the holiday, he also played twice for Swansea, partnering Dicky Owen, one of the greatest scrum-halves ever to represent Wales, although the experiment was not repeated. It is clear from the press reports for the following season that Wyndham was now playing with great assurance and "constantly bewildering" brilliance. He finally won his Blue in December 1912, when he helped Cambridge defeat Oxford for the first time in seven years. The Welsh selectors were so impressed with Wyndham's performance that he was picked to play for Wales against South Africa only four days later. It is a common perception that, in doing so, the WRU contravened their own regulation that players who opted for clubs like Blackheath rather than London Welsh would not be selected. However, all that the WRU had decided some years earlier was that they would give preference to London Welsh players, a rather different matter.

Wyndham's international rugby career was short but dramatic. Five minutes before the end of his debut match against South Africa, with the Springboks leading by one penalty to nil, Wyndham attempted a difficult drop goal, then worth four points. A great cheer went up, but the referee judged, controversially, that Wyndham had missed the upright by six inches. The Western Mail commented that "those inches were sufficient to deprive Wales of victory and of making the brilliant Cantab one of the immortals of Welsh rugby". Had the kick been successful, H. Wyndham Thomas would indeed still be a household name in Wales. Sport can be a cruel business. The Western Mail also commented that Wyndham was "just the type of player Wales cannot afford to lose". In fact, Wyndham had recently accepted an appointment with a firm of shipping agents in Calcutta, and was planning to sail from Gravesend on the very day of the next international match, when Wales were due to meet England. The WRU, however, persuaded him to revise his travel arrangements so that he could play. This meant that immediately after the match - in which England recorded their first ever victory at the Arms Park - Wyndham had to take a long train journey through France, to meet his boat when she docked at Marseilles. It is doubtful whether anyone had a more unusual departure from the international game.

Wyndham continued to play rugby and cricket in India, but returned home in 1915 to take up a commission, eventually joining the 16th Battalion The Rifle Brigade in France in March 1916. Most accounts suggest that he was killed in the battle of Guillemont on 3rd September 1916. However, he actually lost his life elsewhere that day, several miles to the north-west, in an attempt to secure the high ground on the left bank of the river Ancre, north of Hamel. With over 400 casualties, the 16th Rifle Brigade suffered terribly in this assault. Wyndham was one of only a handful from his battalion who managed to reach the German line. He had just encouraged his men to follow him into the trench with the cry - all too familiar on the rugby field - "Come on boys, we've got them beat", when he was tragically caught by shellfire and killed instantly.

Who knows what this exceptionally gifted young man might have achieved if he had survived the war. Writing to Wyndham's family after his death, the Provost of King's College, M.R. James, said "There never was surely a brighter spirit than his", and that he would be greatly missed. Second Lieutenant Horace Wyndham Thomas, the multi-talented King's College choral scholar and Welsh rugby international, is commemorated on the Thiepval Memorial to the Missing of the Somme.