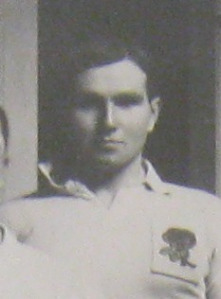 Harry Alexander was born in Oxton, Birkenhead in Cheshire. His father William was a cotton broker in Liverpool, and his mother Edith was the daughter of the little-known artist Robert Gathoney. Harry had one brother and two sisters.

Initially educated locally at Bromborough School, he then went to Uppingham and on to Corpus Christi College, Oxford, where he took a classics degree. Between leaving Oxford and the start of the war he taught both privately and at Stanmore Preparatory School, Middlesex (now Greater London), and spent time as a professional singer (baritone).

His clubs were Birkenhead Park and Richmond, being the latter's captain in 1905-06 season, including in the club's fixture against the New Zealand tourists, known as "The Originals". Richmond's 17-0 defeat represented a better performance than many of the All Black's opponents that season. His seven England caps had come in 1900-02, soon after leaving Oxford and whilst with Birkenhead Park. He was captain in the opening match of the 1902 series against Wales at the Rectory Field, Blackheath. In an era of Welsh domination, the 8-9 defeat was respectable, with Harry converting England's try. Off the field he turned his hand in 1902 to writing "How to play rugby football: The theory and practice of the game".

As well as rugby, he excelled in other sports, having captained the cricket XI at Uppingham, played hockey at county level, and been proficient at the game of bandy, which is a form of 11-a-side ice hockey played on a large outdoor pitch.

Harry Alexander volunteered after the war had started and, after a time at Sandhurst, was commissioned into the Grenadier Guards on 23 July 1915, and by October 1915 he was in France with the 1st Battalion.

He was involved in one of the final actions of the Battle of Loos on 17 October 1915 at the infamous Hohenzollern redoubt. In attempting to take the redoubt the Battalion suffered over 400 casualties in 3 hours, most in fact within the first hour. Harry Alexander was one of the casualties, being killed in action.

In 1913 he had married Louise Risby. Their daughter Jean was born a year later.