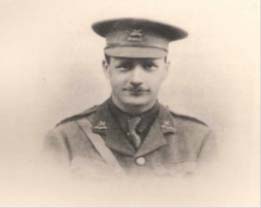 Douglas Lambert was born in South Norwood, and in adult life, being a tall man, was more commonly known as 'Dan'l' or 'Danny', by allusion to the famous giant Daniel Lambert of 100 years earlier. His parents were Ernest John and Elizabeth Jane. Ernest had a tobacco manufacturing company with his brother Allen Brooker Lambert. This later became part of "Lambert and Butler" and then a founding member of Imperial Tobacco. Douglas was one of 5 sons that included his twin brother Percy, and he initially went to Cranbrook School before going on to St Edward's, Oxford and then Eastbourne College, being afterwards taken on as an Assistant Manager with Imperial Tobacco. [caption id="attachment_753" align="aligncenter" width="300"] 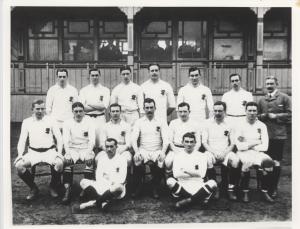 Having played rugby at school, Douglas joined Harlequins and his ability soon came to the attention of the likes of Adrian Stoop. By 1907 he was selected to play for England against France at Richmond, and scored an amazing five tries on his debut. He gained three more caps the following year, but then did not represent his country again until 1911. This was an era of Welsh domination - 1911 saw their 3rd Grand Slam in four years. In between times he played in the first game at Twickenham on 2 October 1909, where his Harlequins side ran out 14-10 winners over Richmond, and captained Middlesex in the County Championship. Like many young men of his day he had various sporting interests, and once turned out for the famous amateur football club Corinthians. When the war came he quickly volunteered with the 6th Battalion of the Royal East Kent Regiment (the Buffs). During the summer of 1915 the Buffs were engaged in trench warfare, but detailed plans were eventually made to attack German positions around Loos. Lasting nearly four weeks from the end of September to mid-October, this was one of the largest actions of the war up to then. On 13 October 1915 a major attack under cover of smoke was launched. By the time the Buffs advanced the smoke had cleared and casualties were high. Douglas Lambert was one of 10 officers (out of 13) from the Battalion to die that day. British troops lost nearly 8,000 men in the Battle of Loos, with over 50,000 others wounded. One direct consequence was the replacement of Sir John French by Lord Haig as Commander-in-Chief. Second Lieutenant DOUGLAS LAMBERT has no known resting place. He is remembered on the Loos Memorial, Pas de Calais, France and also at St Edward's School and Eastbourne College, plus the parish churches of Knapton and Mundesley in Norfolk. Two months after his death his wife Joyce, whom he had married in December 1914, gave birth to a son, whom she called Douglas after his father. He became a notable submarine commander in WW2, winning the Distinguished Service Cross and bar.