During the Great War hundreds of Irish rugby players joined the British Army and lost their lives in the mud of France and Flanders and in the heat of Gallipoli. A generation of sporting heroes died and their number also included soccer players, GAA stars, hockey internationals, cricketers and athletes. For the first time a new book tells the story of how 40 leading Irish sportsmen swapped the playing field for the battle field. 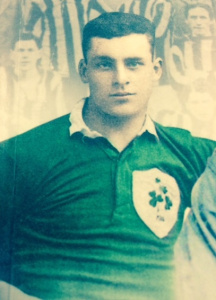 For three Belfast men, the first day of 1912 began in the company of nearly 20,000 noisy, sports-mad Parisians. When Alfred Taylor, William Edwards and William Beatty sprinted onto the Parc des Princes turf, it was in front of one of the biggest crowds the French capital had ever seen. Regular games of international rugby were still a novelty in this part of Europe, and the arrival of the Irish team had excited the city's population so much that thousands of tickets had been snapped up days in advance. Even though France were relative newcomers to the recently formed Five Nations Championship, the expectation of a home victory was still high. The side had improved in recent years, and in the previous season they had beaten Scotland. Press reports suggested that after two seasons playing in the new tournament the French side were starting to look good, and the Irish match was anticipated to be a close affair. For both teams, the New Year's Day encounter marked their opening game to the championship and each side had a fresh look to its line-up. Ireland took to the field with five debutants, whilst the French selectors had chosen six new faces. William Victor Edwards, from Strandtown in Belfast, who played in the pack for Ulster, was one of those making his first appearance in Irish colours. He was very strong and well built, with powerful shoulders, and after impressing selectors during club games in Belfast he was chosen to be Ireland's new Number 8. On the long journey from home, as he whiled away the hours chatting with his teammates, he may well have sought some advice from his fellow Ulsterman William Beatty. Twenty-three-year-old Beatty, who made his international debut at the same Paris ground two years earlier, played as a prop, and had been on the winning side back in March 1910 when Ireland won by 8 points to 3. His French experience and knowledge of the opponents may also have been useful to another teammate, Alfred Squire Taylor, who, like Beatty, came from south Belfast. Taylor, who had progressed through the ranks of school and university rugby and then played for Ulster, was a speedy and talented centre. Life for both sets of young players before the Great War must have seemed carefree and fun. The Irish and French teams included doctors, accountants and students, amateurs who played the game for fun and who were all young men at the peak of physical fitness. They were the sporting heroes of their day, household names with much to look forward to. As they ran out to play an international rugby match at the start of 1912, the idea of a bloody European war beginning in 1914 was unimaginable. A glance at the team sheet from that January afternoon in Paris starkly illustrates how the Great War impacted on the lives of hundreds of sporting stars. Of the thirty players who took the field that day to rapturous cheers, ten would die as a result of the four-year conflict - seven French and three Irish.

Taken from 'Lest We Forget' special exhibition

William Victor Edwards was killed in December 1917 during the defence of the city of Jerusalem, as a member of the famous rugby 'Pals' battalion of Royal Dublin Fusiliers. As well as rugby he was a gifted swimmer and regularly took part in championships and became the Irish 200-yard swimming champion, in addition to being an accomplished water polo player. He was fond of sea swimming and in August 1913 he made history by becoming the first man to swim across Belfast Lough.

Two of Edwards Irish team mates from the game in Paris in 1912 also lost their lives in the war. Alfred Taylor was a member of the Royal Army Medical Corps and during the Third Battle of Ypres in 1917 as he treated a wounded comrade he was hit and killed by a German shell. William Beatty, who rose to the rank of Major with the Royal Army Medical Corps actually lived to see the end of the conflict but he died in 1919 as a result of his experiences on the Western Front. Rugby was not the only sport to lose hundreds of its most gifted stars. Irish international athletes, hockey players and cricketers all enlisted when war broke out in August 1914. Irish soccer captain Harold Sloan, the first man to score a goal at Dalymount Park lost his life as he served with the Royal Garrison Artillery in January 1917. A natural striker, the Dubliner famously scored a hat-trick for Ireland against Wales in 1905 in a game at Wrexham's Racecourse ground. Like those who played soccer thousands of GAA members volunteered to fight and their role is a fascinating part of the story of Irish involvement in the First World War. This area has received little attention and whilst important research has been conducted by people like Ross O'Carroll and Donal McAnallen, the number of GAA players who joined the British Army during the Great War is difficult to quantify. However, it is clear the figure runs into thousands and includes Belfast man William Manning from the Falls Road area of the city, who died in March 1918 in the colours of the Royal Dublin Fusiliers Manning played for Antrim in the 1912 All - Ireland Final which they lost to Louth. A year later, when the final was played at the new Croke Park ground, James Rossiter lined out for the Wexford team. He was a skilful player with a great first touch and his team established a reputation for tough tackling. Despite their ability they were unable to conquer Kerry and they lost in 1913 and the following year. 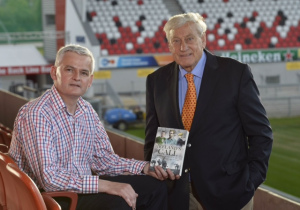 In the early part of 1915 James Rossiter decided to enlist and he saw service with the Irish Guards. It appears he took soldiering in his stride. In one letter home he wrote that he felt more nervous playing in an All- Ireland Final 'than an attack on the Germans. He was killed in October 1915 and naturally his death generated newspaper coverage. The participation of GAA players in the British Army was controversial and Sean Etchingham, the President of Wexford's County Board argued that no honourable man should ever support recruitment into the British forces. A century on much has changed and attitudes have altered. The past still presents difficulty but many people are now prepared to embrace history rather than shun it. James Rossiter and his fellow sportsmen provide a fascinating snap shot of Irish life from a century ago. Their lives reveal a new dimension to Ireland's role in the Great War.

The story of how a generation of Irish sporting heroes was lost in one of the bloodiest conflicts mankind has ever seen. About the Author - Stephen Walker is a Political Correspondent with BBC Northern Ireland. Ireland's Call: Irish Sporting Heroes who fell in The Great War is published by Merrion Press.