Colin Meads was a true giant of the game, his hulking physical presence terrorising defences and dominating line-outs across three decades from 1957 to 1971. Meads has fond memories of Twickenham from his two tests against England in 1964 and 1967. And it is little wonder they are happy memories, the All Blacks triumphed on each occasion, with 'Pinetree' Meads scoring a try against England on his first visit to Headquarters. 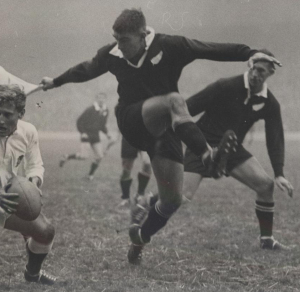 "To us in those days Twickenham and Cardiff Arms Park were the most famous grounds in the world. And Twickenham had baths. I remember the very first time we saw them, which was after the game against London Counties in 1964. We plunged into them with our muddy kit on that first time and were told straightaway to get out and strip off first because we had made it dirty for everyone else following us in. Those baths were fantastic, we had nothing like them in New Zealand."

Something else has stuck with the great All Black about the ground. "We had a baggage man called Matt McKenzie, a Scot, he was a brilliant guy. At halftime against England I remember for some reason the boys wanted water brought on to the pitch. I don't think it was to drink, maybe it was to wash mud off their boots, whatever.

"So Matt went off to find a container. He came up with an empty bottle of Gilbey's Gin and filled that from a tap then came out of the tunnel and up to the side of the pitch. That was as far as he got. He was stopped by an official who told him that advertising like that was prohibited and he was ordered to go back inside and remove the label. The game was so entrenched in the amateur ethos that they had to go those lengths. It was amazing."

As for his try, Meads, who scored an incredible 28 tries for his country in a total of 133 games in the famous All Black jersey, is typically dismissive. "Oh, I think it came from a big forward charge," that would be Meads, "I think I got the ball from John Graham and I scored between the posts, which was useful." Meads welcomes professionalism: "The game had to go professional because of the demands being made on players, but old fogies like me prefer the way it was in our day - long tours, 4 and half months to the UK for example." He did not welcome his nickname Pinetree. "I got that in the Colts. We were in Japan and a couple of Taranaki players decided I looked like a guy who had worked in the local mill. He was known as Pinetree and because he had died they were able to call me by the same stupid nickname. And it stuck." As for the legend that said he trained by running up a mountain side with a sheep under each arm, that came about because of a moment of compassion at dipping time.

"My father had said that if a sheep could not make it to the dipping then it would have to be slaughtered. I picked up these two when they could not make it up the last hill. I was being interviewed at the time by a journalist and his photographer took the picture."

And the rest as they say is legend.