Kenneth Jeffery Jones was born on 30th December 1921 in Blaenavon. He won his first Welsh Schools cap during the 1939-40 season while attending West Monmouth Grammar School in Pontypool. He was called up during WW2 and spent his war-time service in India and so was never capped by the RAF. Before he gained fame as a rugby player, he was well known as a sprint athlete, a talent he had developed while serving overseas. He was already the Welsh and AAA sprint champion before he competed in the 1948 Olympics where he won a silver medal as part of the 4 x 100m relay team. In 1954 he was a member of the Welsh team that travelled to the British Empire and Commonwealth games in Vancouver where he won a silver medal in the 220 yard sprint. In the same year he was given the honour of captaining the British team at the European Championships held in Berne, where he was again part of the silver medal winning squad in the 4 x 100 m sprint relay. At the start of the 1946-47 season Jones starting playing for Newport, a club where he was to remain for the rest of the career. He captained the side in the 1950-51 season when they won the Welsh Club Championship for the first time since 1922-23 and was again the club captain in the 1953-54 season. Jones was first capped for his country against England in Cardiff on 18th January 1947, the first meeting since before the war. Although Wales lost 9-6, he was retained in the side for the remaining 3 games of the Championship. He repaid the selectors faith in him during the next game by scoring 2 tries against Scotland which gave Wales their highest scoring victory against the Scots since 1911. In 1950 he was part of the Welsh squad that won the Grand Slam although the celebrations during and after the final game, a win 21-0 over France in Cardiff, were very muted because a plane carrying supporters back from the previous win in Belfast had crashed at Llandow killing 80 of the 83 passengers and crew on board. This was, at the time, the worst aircraft disaster in history. Ken Jones played 44 times for Wales, but his finest moment came on 19th December 1953 when he scored the final try of his international career which ensured Wales beat the touring All Blacks 13-8. In the last game of the 1956 Five Nations campaign, against France, he won his 43rd cap making him, at the time, the most capped player in world rugby. Throughout his career, Jones suffered a lack of scoring opportunities, at club and international level. Even when alongside the likes of Welsh midfield star players such as Bleddyn Williams and Cliff Morgan, Jones scored very few tries for a wing of his class. This would all change when he was a member of the 1950 British & Irish Lions team that visited Australia & New Zealand and he was the 344th Lion. 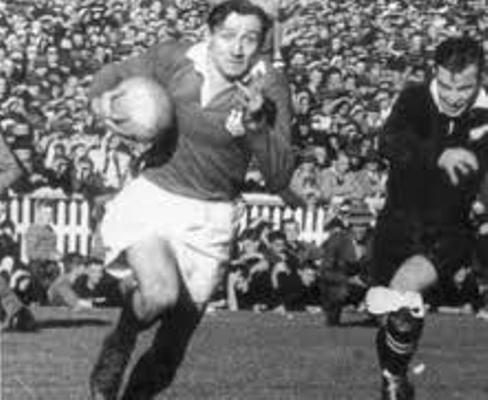 Jones in full flow against the All Blacks.

Playing in 17 games, including three of the four Tests against New Zealand, and scoring 17 tries, he was chosen as one of the five Players of the Year for the tour. His greatest moment on the tour came in the 4th Test; in this match Jones found himself playing against an equally fast track sprinter in the All Black's Peter Henderson. During the game Jones found himself outside fellow Welsh international Lewis Jones following a break from the Lions 25-yard line. Henderson was running between the two Joneses, but with Bob Scott closing in, Lewis Jones threw a pass over Henderson's head which Ken Jones skilfully collected at shoulder level. With 50 yards to the try-line, and with four All Blacks giving chase, Jones showed his Olympic sprinting finesse to just keep ahead of his opponents and score a magnificent try. Unfortunately for him and although he had scored one of the tries of his career, he found himself on the losing side. A fact made worse when in the last minute, with the Lions 11-8 down, Jones chased a kick head and looked to score a certain winning try when the ball turned away from him on the bounce, and the chance was lost. He died in Newport on 18th April 2006 at the age of 84.

About the Author - Having spent his entire working career in the Royal Air Force, David Smith is now the RAF Rugby Union's historian and, at best, a mediocre but enthusiastic rugby player. Other entries in the series - Flying Lions: Rory Underwood, Flying Lions: Bleddyn Williams