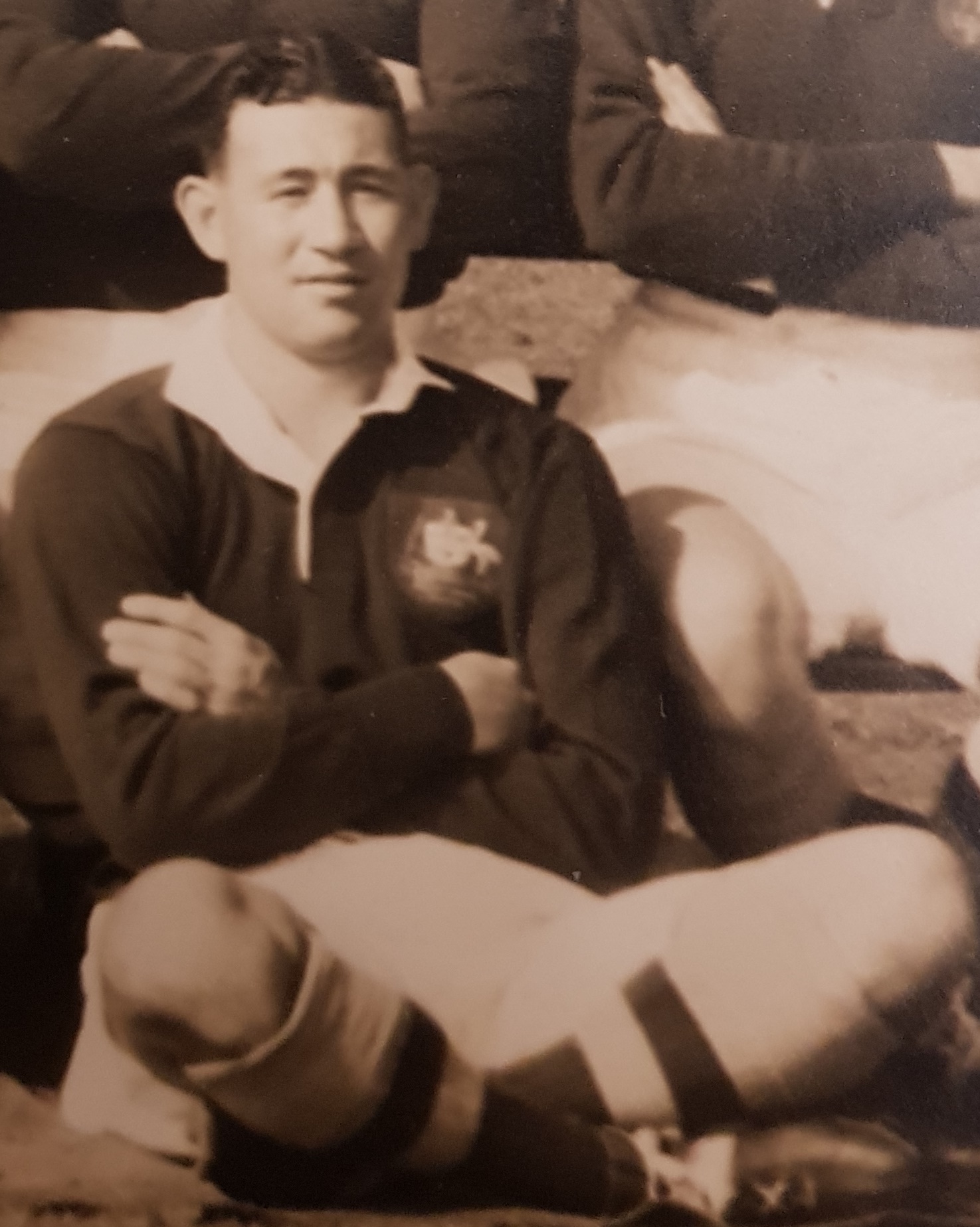 Winston Ide was born on September 17th 1914 in Sydney to Clara and Japanese-born Henry Hideichiro Ide. He developed the nickname 'Blow' as a toddler from his habit of puffing out his cheeks and blowing the air out sharply, being known as Blow to most that knew him from that point on. He developed a passion for rugby at North Sydney Boys Technical High School and between 1933 and 1935 he continued playing rugby with the Northern Suburbs team, helping them win the Sydney Premiership in 1935. Ide was subsequently chosen for the New South Wales state team for five matches throughout 1935 and 1936, but after not making the squad in 1937, Ide decided to try his luck in Queensland to improve his chances of being selected for the state team and the Wallabies. After joining Brisbane's prestigious Great Public Schools Old Boys, he was soon chosen for the Queensland side and was playing against his old team mates from New South Wales. Ide gained a reputation as a 'devastating tackler' and formed a strong centre combination with Edwin Hayes. Both Ide and Hayes were selected to represent Queensland against New Zealand during the All Blacks' 1938 tour of Australia. The All Blacks played 9 matches in Australia on the tour, 3 of which were Tests. Their fifth game was against Queensland on July 30th 1938. The Queenslanders were described as "an experienced and strong unit that went into the match with a degree of confidence." With a strong defence at first, the local side collapsed with New Zealand's repeated onslaughts and fell 9-30 to the All Blacks. In spite of Queensland's loss, Ide impressed selectors and he was called up the following week for his international debut. On August 6th, New Zealand met an Australian side for the second time of the tour. The match took place at the Exhibition Ground in Brisbane in Winston Ide's home state of Queensland. Ide was one of four to debut for Australia that day, alongside another notable name Cecil Ramalli. Ramalli, like Ide, is a distinguishable figure in Australian rugby history for his family heritage and is regarded as the first indigenous Australian to represent the Wallabies at international rugby. The match was described as a 'cracker' with fast, open play. There would be 25 minutes of play before either team scored, but by half time the All Blacks held a clear lead at 13-3. Ramalli had to be treated for facial cuts in the second half; testament to the plethora of hard knocks he'd received from the solid New Zealand side. Whilst Australia were able to push through to score a two tries and a penalty kick, the All Blacks were victorious on the day with a final score of 20-14. Ide, usually at five-eighths, was transferred to outside centre at the last minute. Despite this sudden shift in position, commentators found much to be praised in his performance, stating that "after a brief period of (uncertainty) his attack and defences were really great" and that "an exceptional quality was given by Ide." The final test of the 1938 New Zealand tour took place at the Sydney Cricket Ground on August 13th in front of a crowd of 20,000. Ide would be chosen to represent Australia once more. Contested on a hard ground on a hot day, the play was less impressive and culminated in another win for the All Blacks, 14-6. The Australian backs, including Ide, barely got a chance to shine due to limited possession and Ramalli had to leave the pitch once more after being knocked out by the rampaging New Zealand forwards. Sports writer Syd King commented on Winston Ide's ability to perform as a centre: "sturdily built, of medium height, Blow was nicely set up for a centre three-quarter. He was not particularly fast, but had a nippiness and speed off the mark. Most of all he had great courage and his low, hard tackling and fearless going down on the ball in the face of charging forwards won him many admirers.'" It was this all-round ability that impressed the Australian selectors, who chose Ide for the Wallabies' 1939-1940 tour to Great Britain. Ide and the team arrived for the ill-fated tour the day before the Second World War was announced. The tour was subsequently cancelled without the opportunity for the Wallabies to play a single match on British soil. 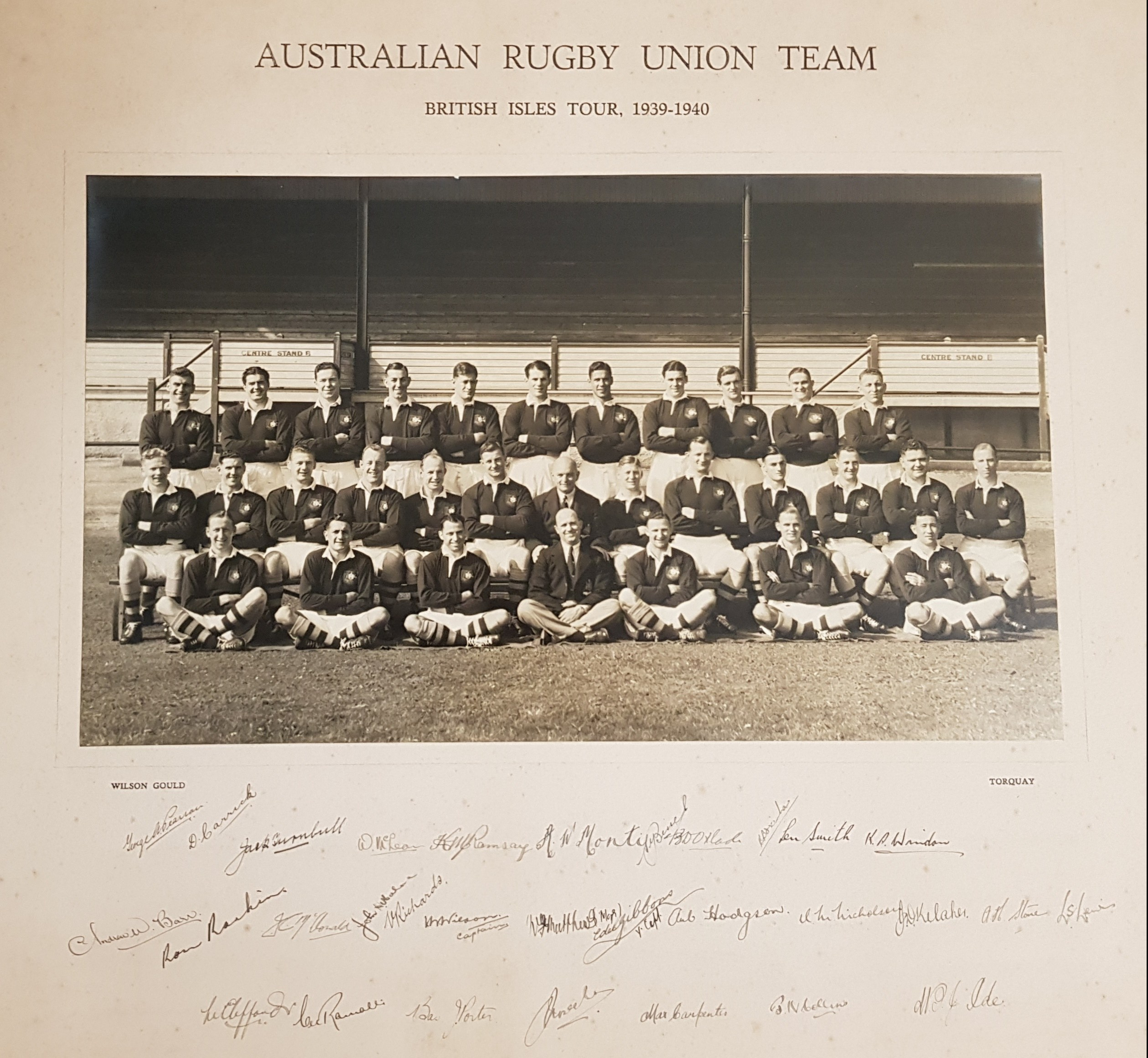 After arriving back in Australia from Britain, Winston Ide enlisted in the Australian Imperial Force on July 1st 1940. Posted to the 2/10th Field Regiment of the 8th Division, Ide would first encounter action in January 1942 after Japan had entered the war the previous month. Ide took part in the successful ambush of the enemy in Mersing in the south of Malaysia; however, after weeks of intense fighting Singapore fell to the Japanese in February and Ide was captured and taken prisoner of war along with 45,000 Australian and British troops. In May 1942, as part of a slave workforce Ide was transported north to construct the Burma-Thailand railway and endured horrific conditions for two years. Many did not survive this ordeal, but an overworked, diseased and malnourished Ide managed to. After the completion of the railway the survivors were sent back to Singapore, and it was from there that Ide and more than 1,300 prisoners of war boarded the Rakuyo Maru, destined for Japan. On September 12th 1944, the Rakuyo Maru, along with another transport ship the Kachidoki Maru, was torpedoed off the Bonin Islands by the American submarine Sealion, whose crew did not realise the ships were carrying allied prisoners of war. It took 12 hours for Ide's ship to sink. No prisoners were seriously hurt from the torpedoing of the ship, but the odds were against them from that point on. There were few lifejackets and the Japanese aboard the ship had commandeered the available lifeboats. The sea was full of oil from the convoy's tankers, leaving fire burning in oil slicks, and yet there was nowhere else for the men to go but into the burning sea. Over the following days, a handful of prisoners and Japanese crew were picked up by the Sealion and Japanese vessels, but Ide's body was never recovered. One of the survivors later stated that, "those of us who escaped from the sinking Rakuyo Maru clambered onto rafts. I spotted Blow in the water and called for him to join us, as there was room for another. Blow shouted back that some of the boys in the water near him were pretty badly hurt and he would stick by them. Our raft drifted away and I didn't see Blow again." Winston Ide's sacrifice was one that his rugby teammates would never forget. In 1947, they created the Blow Ide Memorial Cup in his honour, which would be awarded to the victors of the North Sydney v South Sydney rugby match until the 1970s. A memorial written by Winston Ide's friends aptly reads: "Blow Ide died as he had always played - for his team."