England and France first met for a match of international rugby in 1906. Whilst England had been playing rugby for 35 years by this stage, France was new to the international rugby scene. Having only played one previous international match against New Zealand, it was soon time for France to try their hand against England. The two teams would meet annually from this point onward, but five years later, the teams would make history once more by meeting for the first time at England's new home of rugby, Twickenham Stadium. 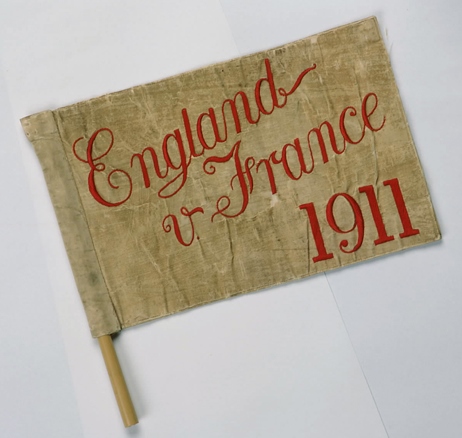 England had played their first international match of rugby at Twickenham Stadium in 1910 against Wales. The annual draw between England and France was due to take place in Paris that year, so England had to wait another year to take on the French at their new home ground. That time quickly came about, and a French contingent was sent to take on England at Twickenham Stadium on January 28th 1911. 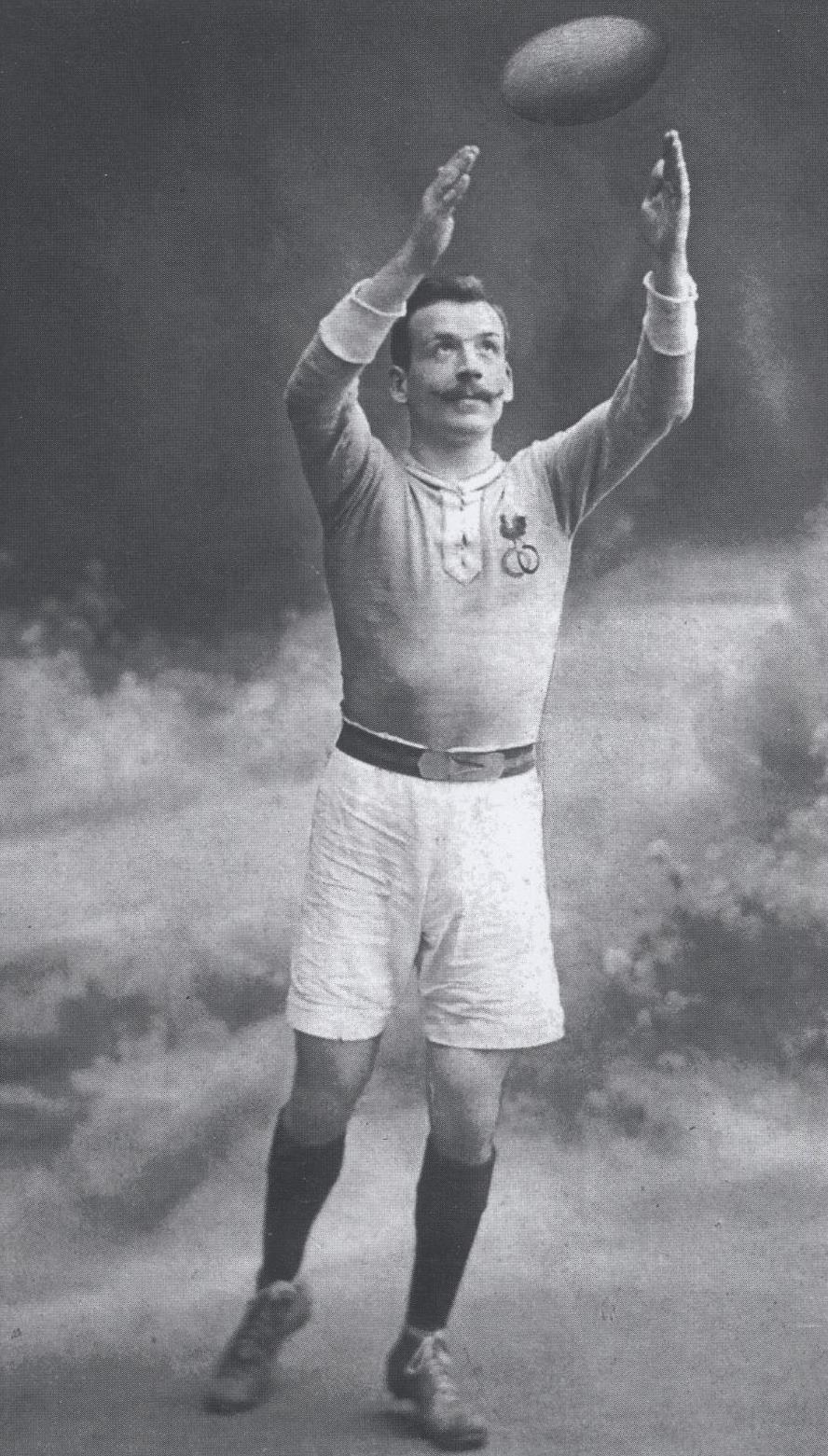 With the team was French debut and full back, François-Xavier Dutour. Dutour trained at the sports association of Blaise Pascal High School in Clermont, playing for the school team 'Les Iris', and was subsequently selected to join Stade Toulousain. It was an exciting time to be a part of the French team, as they had just achieved their first ever victory a few weeks earlier in a well-contested match against Scotland. This left English spectators eagerly anticipating a fine display from the visiting Frenchmen, but their performance at Twickenham in January 1911 couldn't have been poorer. England's new home ground appeared to scare the French into submission, the final score culminating in a 37-Nil victory in England's favour. In reality, the dramatic loss could be attributed to a number of factors, primarily: the absence of key French players who shone in the match against Scotland and the loss of a number of the team to injuries during play. At half time, England had only scored 8 points, but injuries to Dutour and his teammates Laterrade and Peyroutou meant that France had lost their full back, fly half and scrum half in the second half. This opened up the opportunity for England to score an additional 29 points by the end of the match. Most of those points were scored by Dan Lambert, a wing from Harlequins, who scored 22 points (2 tries, 2 penalties, 5 conversions) - a record at the time. 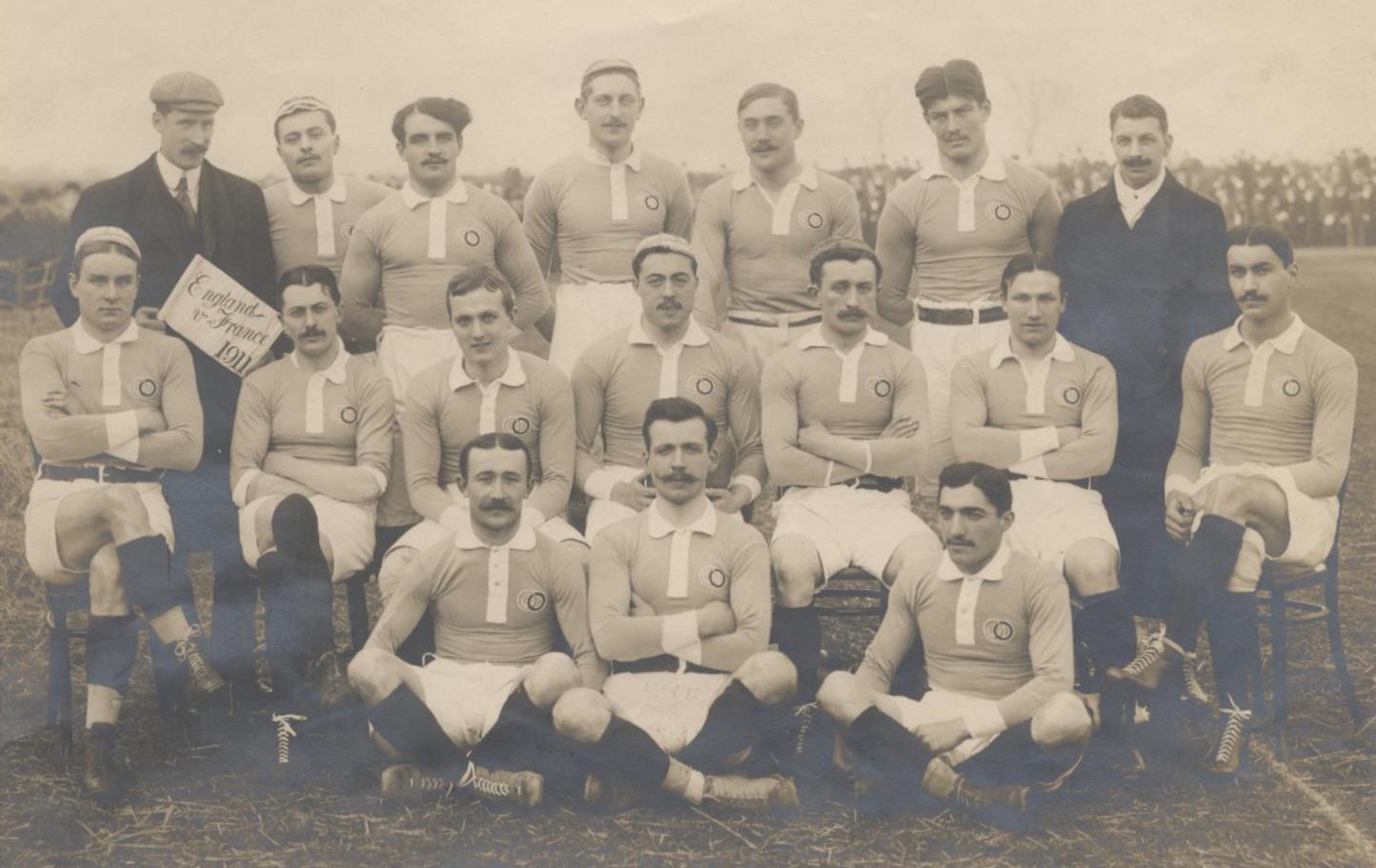 The touch flag on the left of the image can be seen in the World Rugby Museum's Rugby Pioneers display, alongside Dutour's jersey and cap.[/caption] Recovered from his injury and keen to move forward from the dismal result at Twickenham, Dutour would play Ireland in March 1911, scoring a conversion in the first half of the game. Both the matches in England and Ireland are commemorated on Dutour's rugby cap from the 1911 season, which sits proudly alongside his 1912 jersey in the World Rugby Museum's Rugby Pioneers display. 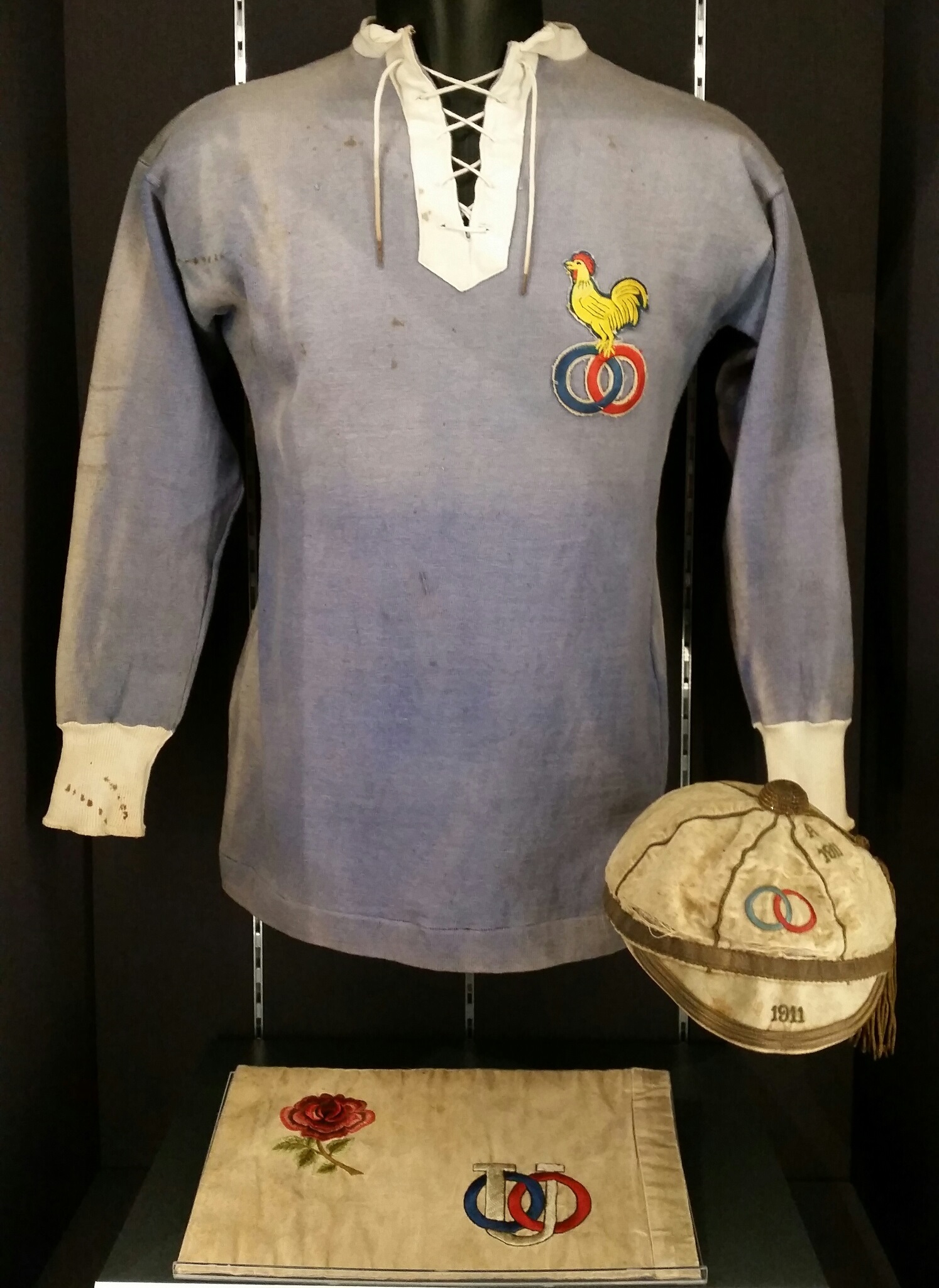 Sitting below Dutour's jersey and cap in the Museum is an intricate touch flag. Used by match officials in the French rugby team's first appearance at Twickenham Stadium on 28th January 1911, the flag can also be seen in the above image of the French side on Twickenham's pitch that day. It is held by Cyril Rutherford, a British expat in Paris, who was a French Champion with Racing Club de France in 1902 and the Secretary for International Affairs at Union des Sociétés Françaises de Sports Athlétiques. Like Rutherford, Dutour would also become a French Champion, winning the championship in 1912 with Toulouse against Racing club de France. He would also play three international rugby matches for France that year. His jersey in the Museum was worn either against England or Scotland in 1912, which can be ascertained through the jersey badge. Jersey badges evolved quickly at this point in time. In 1911, the French badge consisted of two intertwined rings, as seen in the above team image. Dutour's jersey has the addition of the cockerel above the rings, which was introduced in 1912. From this point onward, the cockerel became synonymous with French rugby. 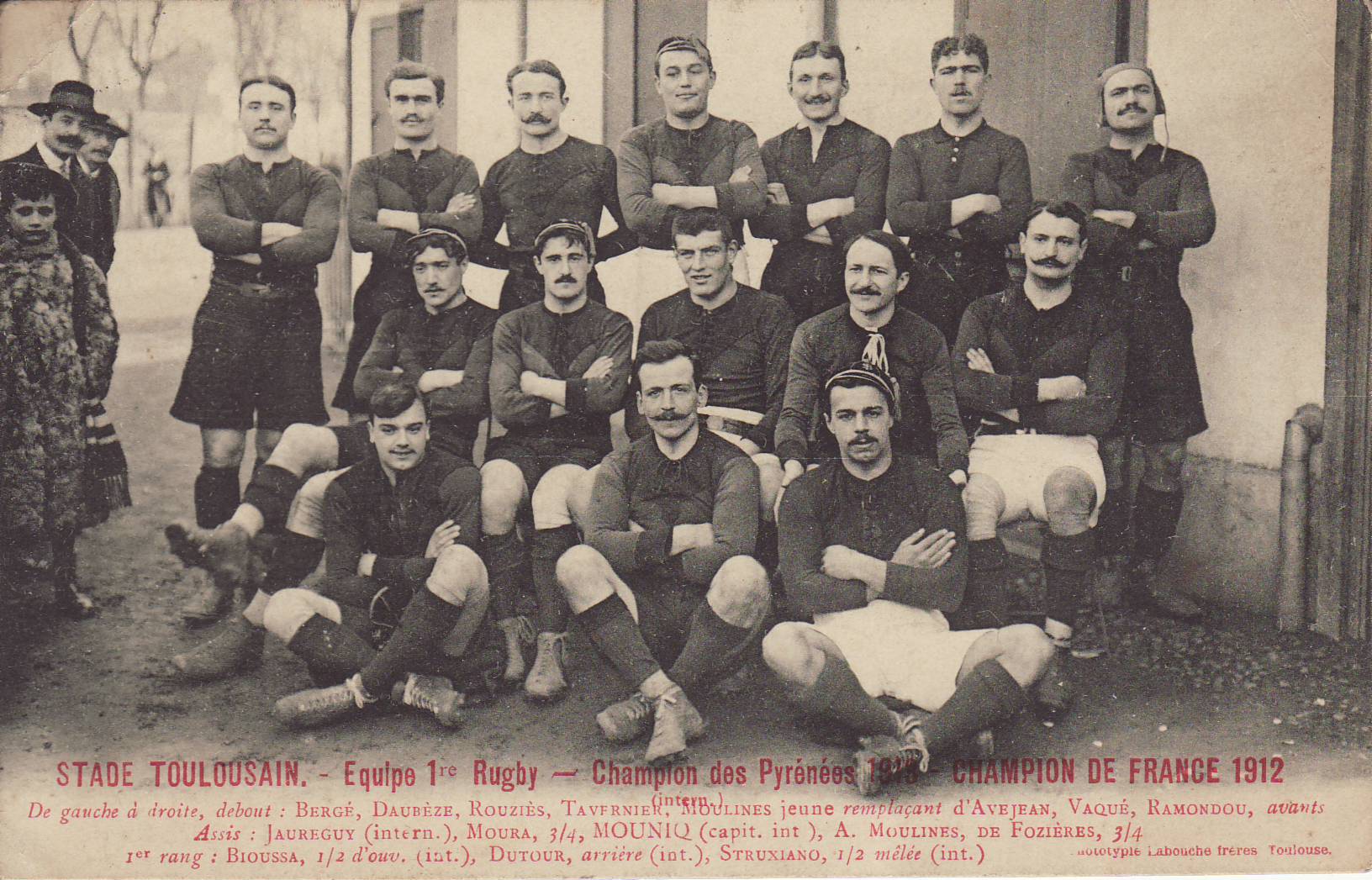 Stade Toulousain, Champions of France, 1912. Dutour is in the centre of the front row

Dutour played his last international rugby match in 1913, with the arrival of the First World War in 1914 halting his international rugby career. Whilst Dutour lived a long life, a number of the men he played with at Twickenham on 28th January 1911 did not survive the war. These include the high point-scorer Dan Lambert, along with Len Haigh and Jack King from England and Marcel Burgun, Marcel Legrain and Pierre Guillemin of France. Directly after the First World War, the Fédération Française de Rugby was formed, becoming the governing body for rugby in France in 1919. The Fédération made the decision to remove the two rings from the jersey badge in 1922, changing the emblem to a cockerel standing atop a rugby ball.