In late April 1911, the Monmouthshire Evening Post reported on a charity game held at Rodney Parade. A "Married" team was turned out in a variety of shirts owned by the side's skipper, Charlie Pritchard. A fixture in the fearsome Newport side for the first decade of the twentieth century, Charlie was a core forward in the Welsh pre-First World War "Golden Age" side. Most famously, he was many pundits' choice as "Man of the Match" on that famous day in December 1905 when Wales beat the All Blacks. He is sat in the centre of the shot, the ball resting on his bandaged knee, his gentle gaze fixed on the camera. He is proudly wearing an All Black shirt. On his left is another Newport legend, George Boots, who is wearing an Anglo-Welsh touring shirt from 1908. Two to his right is Jehoida Hodges, sporting a Springbok shirt from their very first tour in 1906. There are also shirts from Australia (again, the Wallabies' first ever tour in 1908), each of the Home nations, an Ulster shirt and from club sides such as Cardiff and Watsonians. To see Charlie's collection of shirts is to see a potted history of the growth of the game. 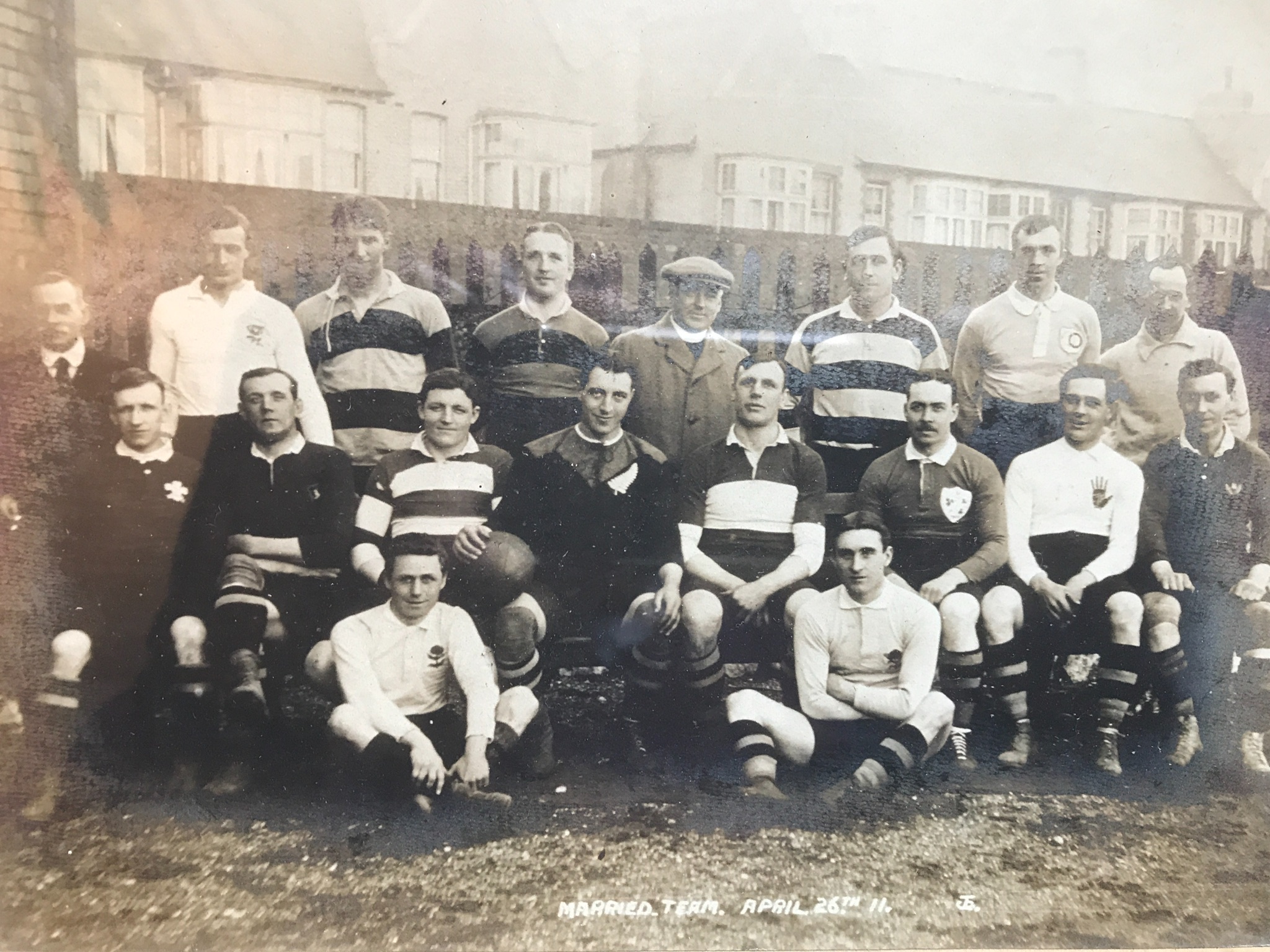 Since the arrival on these shores of Dave Gallaher's "Originals" of 1905, rugby memorabilia has become big business, but for Charlie Pritchard it was a means to a philanthropic end. He saw the potential for fund raising if his team mates turned out in his collection of shirts at his home ground at Rodney Parade. The resulting gate receipts, he knew, could help various causes in his home town. In the 1911 match, the church roof at St John's Maindee was his named charity, and in 1912, a similar match was dedicated to raising funds for the local rowing club. Charlie knew that the wider Newport community would benefit from such an act of selflessness. Some might have seen it as part rugby encounter and part fashion show, a chance to see a famous array of shirts worn by some local legends, although just five minutes in combat with George Boots or Jehoida Hodges would serve to refocus that particular perspective on the game. Accounts of these so-called "charity matches" show that that they were full blooded affairs. Indeed, some of the shirts do have blood stains, browned over time, as well as the ingrained Rodney Parade mud that the local laundry business run by Welsh legend "Prince" Gwyn Nicholls had failed to shift. On his death Charlie was lauded as an example of the very best Britain could send onto the battlefield. His shirt collection is perhaps an example of the very best our sport has to offer. Charlie died of wounds after leading a trench raid in August 1916. His last words from his bed at the Casualty Clearing Station at Chocques were widely reported.

He slipped away during the night of 14th August 1916, seemingly resigned to his fate, and comforted by the news that the German prisoner he had captured on the trench raid was safely in custody. The Newport based rugby writer of the time "Dromio" described Pritchard thus -

"On the field he was a lion, off the field he was one of the tenderest and sweetest of men. There was a quality of gentleness in his manner, a note of affection in his voice, and great a player as he was, one thinks of him as a good comrade, a genial companion - a "very gallant gentleman" who laid down his life in the Great War."

The writer Barbara Tuchman once said that "The Great War of 1914-18 lies like a band of scorched earth dividing that time from ours." Over a hundred years after his death, Charlie's shirts have been taken out of the family attic and are now under the care of the World Rugby Museum at Twickenham, where he played international rugby for the very last time. Just six and a half years after that match, this gentle, affable man was bleeding to death at a field hospital in war torn France. The Pritchard Collection not only gives us a unique insight into rugby history, but also connects us to that pre-1914 world through the story of an iconic character who perished in that dreadful conflict. 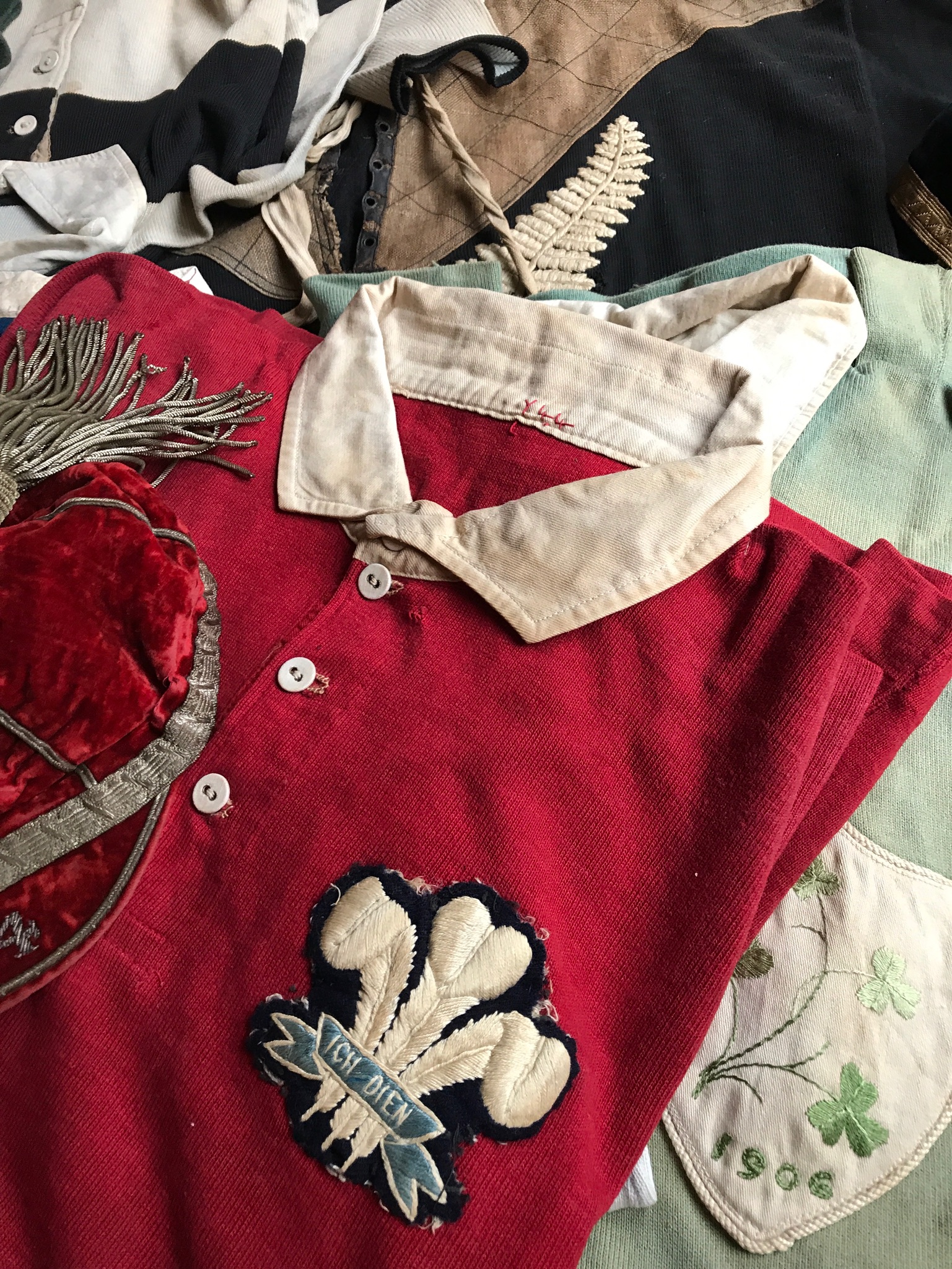 About the Author - Born and raised in North Wales, Peter Jones has spent his adult years over the border. Having spent several years as a teacher in Southampton, he now runs his own Tour company - Single Step Tours - and writes. He is married, with four children, and lives in Romsey, Hampshire.

The forthcoming book on Charlie Pritchard will be his fourth. The first two published by Natula - The Stormy Blast and A Torch in Flame focused on the First World War. His most recent book was Newport Rugby Greats, published by Amberley in 2016. See his website: http://pjonesbooks.com