When international rugby began in 1871 it was a twenty-a-side game dominated by forward play and protracted scrummaging. In 1877 the number of players was reduced to fifteen. Over the following decade and a half the number of forwards slowly decreased as the number of backs slowly increased and teams discovered the benefits of a more attacking, open game, utilising running and passing backs. This extract from Frank Marshall's 1892 book 'Football the Rugby Union Game' describes this evolution and pays special notice to Alan Rotherham, credited as the innovator behind the development of the half-back role. 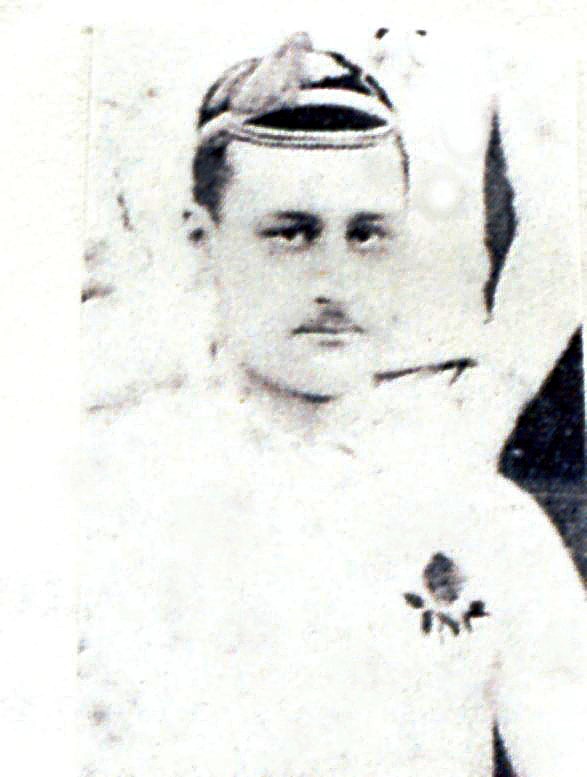 When then, the forwards, by their adoption of hand and foot play in the loose, had become formidable aggressors in the open, it was found that one three-quarter was no longer able single-handed to cover the field between the half and full-backs, and it became necessary to bring up one of the latter to reinforce him. For some years this arrangement was adhered to. The first occasion on which the South played three three-quarters against the North was in 1882 when the South team was mainly composed of Vassall's Oxford team. The innovation came about in a somewhat curious way. P. Newton, who had been selected to play forward for the South, was unable to take his place, and H. Vassall had formed such a high opinion of the capabilities of Wade-an opinion more than confirmed by his subsequent career-that he wrote to the Selecting Committee strongly advocating his inclusion in the team. After much deliberation and some misgivings-for these were the good old days, when forwards really worked in a scrummage-the committee resolved to hazard the experiment. The success is met with practically settled the question, and for the future three three-quarters were universally adopted. It was not long before the contagion of passing, which had attacked the forwards, spread to the half-backs. Hitherto they had played an individual game, but with three men behind them, who they knew must not be left idle in the cold, and with the means, of transmission handy in the mechanism of passing, they were bound to consider their own play as subservient to providing the three-quarters with favourable opportunities. What half first set the example of "feeding" I am unable to say. Rowland Hill tells me that the first time he ever saw a pass by a half to a three-quarter was in the North and South match in 1881, when J. Payne slung the ball out to Bartram, who gained a try. There can be no doubt, however, that the man who reduced the art to science, and thereby revolutionised half-back play, was A. Rotherham, of Oxford and Richmond-the equal of whom we have never, in my opinion, since seen. This player, though coming form Uppingham School, where they do not, I believe, play the Rugby game proper originated at Oxford a totally different half-back game from what we had hitherto been accustomed to see. He was the first to clearly demonstrate that a half-back ought not to run and play for himself, but ought essentially to be the connecting link between the forwards and three-quarters, and he showed how this ought to be done, not merely by stationary but by what I may term "opportune" passing i.e. running himself and not passing till he had got his three-quarters on their legs, and till he had fogged his opponents as to whether they ought to go for him or the three-quarters he was intent on feeding. And he not only showed how and when to pass, but how and when not to pass, and how a half ought to run on himself when by a feint, he had decoyed his tacklers to the three-quarter and left an open field for himself. "Rotherham's game" as it was popularly called, created the type of an ideal half, and he still to this day remains the standard by which the qualities of players are measured, and the example which every half still strives to imitate. And as a single individual was responsible for the change in half-back play, so are we indebted to another for the evolution of a centre three-quarter. What Rotherham did for the halves, Rawson Robertshaw, of Bradford, did for the three-quarters. Till he came on the scene and demonstrated that a centre ought not to play for himself but for his wings, a centre such as we look for nowadays was never before typified. His game might be described as a reproduction at three-quarter of Rotherham's at half, the idea of playing for his wings rather than himself, and feeding them by what I have previously termed "opportune" passing being the main axioms which lay at the root of his theory. And thus he became the last existent link-through the future may add others-in the machinery which has brought about the co-operation of forwards, halves, and three-quarters.

About the Author - Frank Marshall was a rugby analyst, writer and administrator. He is remembered for his staunch opposition to professionalism in the 1880s and 1890s during which time he banned his own club, Huddersfield, for breaching the amateur code.