When I was a young rugby player, fresh from school and with a whiff of cut grass in my nostrils and dreams of playing for my country in my mind, there was an old, beaten up rugby cap in our club cabinet. Glasgow Academicals was the name of my club and we were based in the leafy west end of Glasgow. 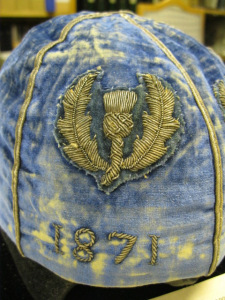 The cap is on loan to the RFU at this very moment. Wrongly, we hardly took notice of the cap. Rumour had it that the cap had been worn by one of our former internationals, JW Arthur and had been given to him for representing Scotland against England in the very first rugby international in the world way back in 1871 at Raeburn Place in Edinburgh. But that didn't stop us from using the cap for court sessions as we'd remove it from its unlocked glass cabinet. Well, at 17 things seem very, very distant when they come from the past. Now I'm 57 and, frankly 1871 doesn't seem that long ago. In fact it's less than three of my lifespans ago and I am about to become the honorary president of my club in our 150th year which begin this June. So how did that very first match come about? In 1870 there had been unofficial games between Scotland and England in London. These were formative times for "football" as there were different versions of the game and, South of the Border, just the one governing body - the FA. Five "international" games had been organised by Charles W Alcock the secretary of the FA and had been played at Kennington Park under FA rules and the Scottish team was made up of men living in London - one, allegedly, picked because he came North to shoot grouse occasionally. Anyway, the Scottish clubs were not best pleased. At the time there were around ten Scottish "football' clubs, and five clubs signed a letter challenging the English to a game under rugby rules, 20 a side, and the letter was published in the Scotsman in Scotland and in Bell's Life in England. It's interesting to note that at the time five of the Scottish clubs - Queens Park, Kilmarnock, Thistle, Hamilton and Airdrie played the association rules while the rest played rugby rules. 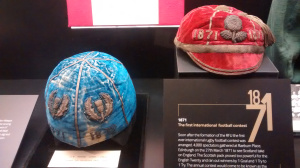 Two of the five signatories to the challenge letter were JW Arthur, from my club, and Alexander Robertson from West of Scotland our close neighbours and friends. The English clubs accepted the challenge and so the first game took place, in Scotland, a year later in 1871. The FA had ignored the letter, but Blackheath picked up the challenge. A team was assembled and Scotland won, largely due to confusion over rules as our man, JW Arthur, knocked the ball on and yet a try was allowed. Well it wasn't deliberate. And recently, as a history was written about sport in Scotland, it came to our attention that the RFU had an English cap from the first international and we were pleased to contact the RFU with the news that we too had one and it now sits proudly, on loan, in the World Rugby Museum. This great game has its roots in that letter. The cap is a reminder of some of the great men, and those who followed who grew the sport world wide. And I'm proud my club was involved. 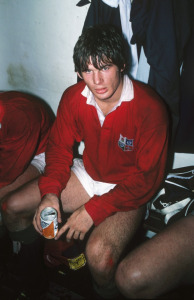 About the Author - John Beattie earned 25 caps for Scotland between 1980 and 1987, winning a Grand Slam with his side in 1984. He is a broadcaster with BBC Radio Scotland and the President of Glasgow Academicals,who celebrate their 150th anniversary in 2016.