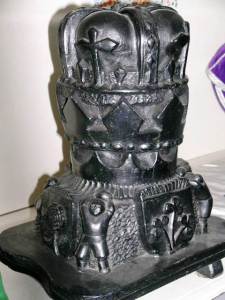 In 2006 a silver shield was produced as the physical embodiment of an idea that had existed since 1894. The Triple Crown was first made reference to by the Irish Times in 1894 after Ireland had defeated England, Wales and Scotland in a single season for the first time. Since then the notion of a mythical crown has been a firm part of rugby lexicon and the Triple Crown is one of several accolades contested annually during the 6-Nations Championship.

However the 2006 shield was not the first such trophy to have been proposed. In 1975 Dave Merrington, a retired miner from County Durham, sculpted an ornate crown embellished with an English rose, Irish shamrock, Scottish thistle and Welsh Prince of Wales feathers out of a piece of coal that had been hewn from the Haig Colliery in Whitehaven, Cumbria.

This 'Real' Triple Crown was then offered to the four home unions as a trophy for whichever team successfully defeated the other three. Tudor Jones, sports editor for Coal News, campaigned for several years to have the trophy accepted by the unions but eventually conceded defeat when Gareth Edwards and Gerald Davies, themselves sons of miners, said that they would prefer for the crown to remain the stuff of legend. 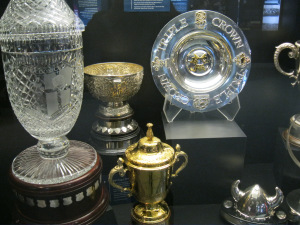 The 'Real' Triple Crown however lived on. In 2000 it was formally presented to the World Rugby Museum by former England centre Jeff Butterfield.