The World's Greatest Rugby Squad was the original title for Alistair Morrison's powerful photograph, Waiting for Lomu, which is now on display at the World Rugby Museum. Inspired by a mixture of celebration and nostalgia stirred by the 2015 Rugby World Cup, Morrison embarked on a journey to create a single image representing 25 rugby legends. The likes of Jason Leonard, Zinzan Brooke, Martin Johnson, John Smit and David Campese were amongst the 24 iconic players that Morrison was able to capture. The missing piece for Morrison was Jonah Lomu. Alistair Morrison is a celebrated portrait photographer, with 82 works currently in the National Portrait Gallery in London, and a multitude of original edition prints in private collections worldwide. He was kind enough to share with the World Rugby Museum his thoughts on rugby, photography and his journey to capture the world's greatest rugby squad. Waiting for Lomu is a recent addition to your legacy photography assemblage. Why does legacy photography resonate so well with people? The idea of legacy photographs resonates not only with the audience, but also with those who are asked to take part. Legends of Rugby have been acclaimed over many generations. The older fan will remember great players from decades ago, whereas the younger fan will look to recently retired players, perhaps not even recognising players from past generations. So the selection of my team of Rugby Legends is personal to me - which allows discussion as to whether your team would be the same, and it almost certainly would not be dependent on your age, nationality and memory. There will always be a healthy discussion about who would be your most favoured No. 9 or full back and that is what makes the idea so exciting - a dinner table conversation of your greatest Rugby Legends will bring together a multitude of different teams. I found that it was also very important to the retired players to think that one photograph would last forever, housed in a National Museum, long after they played their last game. When you watch Zinzan Brooke walk up to Phil Bennett and say that he was responsible for getting Zinzan hooked on Rugby it is quite inspirational to think that getting Legends together in celebration of their achievements and documented in the photograph may also bring inspiration to a new generation of talented players. Do you have a personal relationship with rugby? I was a sportsman who had to make early decisions, at school and county level, as to which sport I chose. Having been brought up in Argentina, soccer was always my number 1 sport closely followed by Hockey and Rugby. At school in the UK, it was similar, so rugby got second billing - but I loved the sport and grew up in an era where Saturday afternoons were all about watching the internationals. I am an embarrassingly frustrated sportsman who thinks he could have made it to a higher level, but was far short of the excellence that you require to make it to the top. Is there a significance of having 25 rugby legends in this image and not a team of 15? Initially I had a clear idea of my first XV and wanted to ensure that the team was chosen through my knowledge of the game plus much research and discussion with experts from the media and some of the Legends that I could chat to. One important decision was to only include those who were retired, so players like Dan Carter and Richie McCaw were not eligible as they were still playing in their last World Cup at the time. When you organise such an ambitious photograph you need to have the support of 4-5 of the Legends on your team to start with and then others will follow. There is always a chance that you will not get a reply, so you send out invitations to others who were close to your first XV. After all the Legends of the game had specific roles on the pitch and kept the same numbers on their backs and you can only start a game with one player in each position. I had such an overwhelming response that I always had it in mind that modern day teams are based on a squad of players, interchangeable and all of whom make a difference whether starting the game or coming on as a substitute. So it worked out that 25 players ended up in my squad - a formidable group. 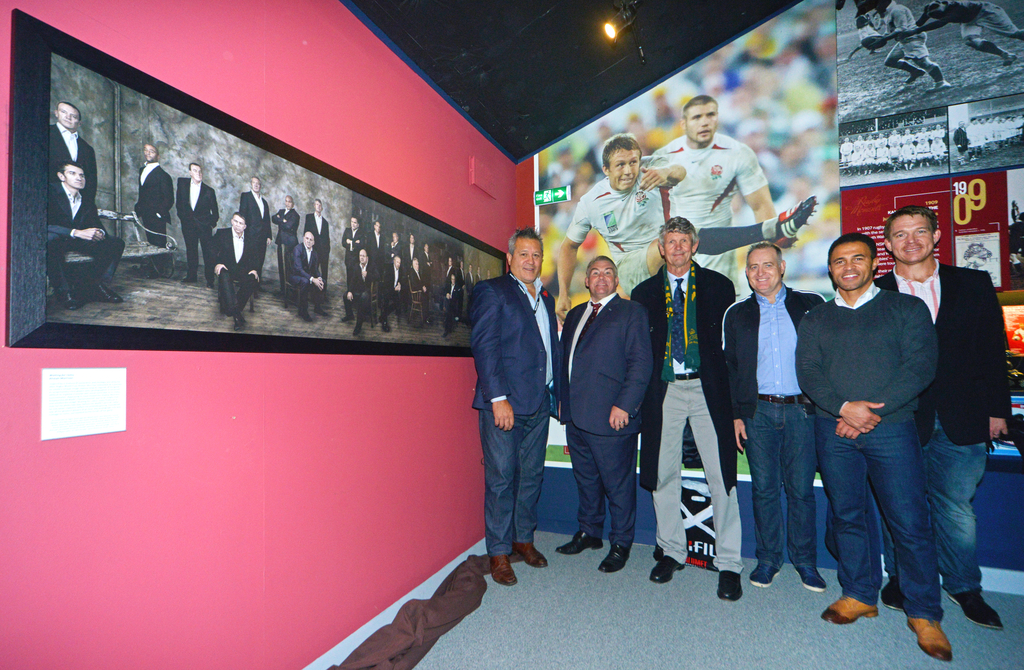 Can you tell us about your journey to photograph Jonah Lomu? One of the first choices for the team was Jonah Lomu. He was also the most 'wanted' man during the World Cup with media commitments, dinners, appearances all over Europe. I was struggling to get an answer from him right up until three days before the World Cup Final when he finally said YES. By then I had almost given up hope and my quest to get him to sit for me had become a journey of hanging around and waiting for his answer. I knew that there could be no disputing his presence in the photograph, universally acknowledged by the other Legends, so I placed an image of him in a frame next to an empty chair, which became 'Waiting for Lomu' and showed the image at a private unveiling for the other Legends the day before the World Cup Final - but also announcing that Jonah had finally agreed and that he would be placed sitting in the empty chair. Jonah wanted to have a short break and it was arranged that I would photograph him at a later stage. He passed away two weeks later. Your photograph is now entitled Waiting for Lomu, when it was originally named The World's Greatest Rugby Squad. Does this change the tone of the image? The photograph has become a tribute to Jonah Lomu as much for the fact that he is acknowledged within the image, but also because all of those who are also in the image would have chosen him to be in their team. Waiting for Lomu was supposed to be about my journey in trying to get him to sit for the photograph, but it has become much more pertinent now. A number of players in your photograph are personally involved in charities and foundations associated with health and sporting related injuries. Can legacy images such as yours provide an opportunity to gain further insight into the complex private lives of sporting heroes? Editions of my Legacy photograph were donated to various charities including the J9 Foundation (Joost van der Westhuizen's Foundation for Motor Neurone), Michael Lynagh and the Stroke Foundation and the Jonah Lomu Foundation. There is a greater awareness now in all sports as to the potential results that contact sports can have on future health. Any opportunity to discuss this, to bring it to the attention of the wider public is a good thing. I think my legacy photograph is as much a reflection of how these great Legends have fulfilled their passion of playing a game they loved, how they have inspired other generations and how they, as men, should never be forgotten for the great joy they have given to our sporting lives.

Waiting for Lomu is now available for public viewing at the World Rugby Museum in Twickenham Stadium. For further information, please call 020 8892 8877 or email [email protected]