For much of history the Triple Crown has been what the Pope wears in his most ceremonial moments or the shorthand for the three most famous U.S. horse races for three year olds. For the Rugby world, though, it became the feat of one of the Home Countries defeating all three others in a single season. It was apparently first referred to as such by the Irish Times in 1894, and again by Whitaker's Almanack in reporting another Irish success in 1899. It was far from being a common catchphrase, though, and of course for over a century there was no actual trophy, crown-shaped or otherwise, for the winning nation. In 2006 the invisible became flesh - or rather, silver - with the impressive plate commissioned by the RBS. There had, however, been other unsuccessful offers, not least a fine sculpture made from anthracite coal by Dave Merrington of Durham in the 1970s. That now resides at the World Rugby Museum, and so does another Triple Crown - and indeed Grand Slam - trophy. Not one for the victorious nation or union, but for individuals who had experienced the joy of being top dogs in the tournament - specifically, the Welsh of 1908-9. The habit of awarding medals to such heroes was not new: as early as 1893, there were beautiful nine-carat gold medallions for Wales' first 'Triple Victories' season, as the engraving put it. That of Frank Hill of Cardiff was returned to Wales a few years back through the generosity and good offices of the Welsh Sports Hall of Fame, a benefactor, and auctioneer Richard Madley. 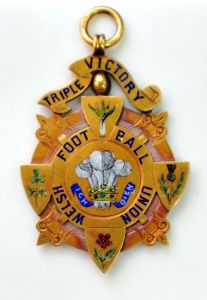 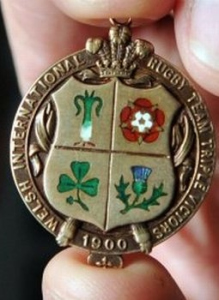 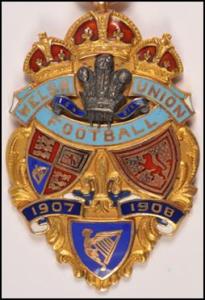 That of Jerry Blake, also of Cardiff, from 1900 also bears the 'Triple Victories' legend, and remains proudly within his family, while the gold and enamel 1907-08 version awarded to the third of a Cardiff trio, Percy Bush, is with the World Rugby Museum. No sign of a St George's Flag for England in any of these: the Royal Standard-style lion or Tudor Rose is favoured, with either shamrock or harp for Ireland and thistle or lion rampant for the Scots, and a leek for the Welsh. Their players from the immortal 1905 win over the Original All Blacks also got medal memorabilia, but the first example of a cup for each member of a Welsh winning side may be the trophy pictured here. Trophy? Well, as you can see, trophies, in hallmarked silver, in fact. That on the left, with the split in the supporting ball, is held at the World Rugby Museum. That on the right is on display at the Welsh Rugby Union's Principality Stadium, and has the distinction of belonging to the family of its original recipient, Richard 'Dick' Thomas, one of the 13 Welsh Caps to fall in the First World War. [gallery ids="2301,2302" type="rectangular"] It was an individual, not a 'team' award, then, although its engraving marks the achievement of five wins in 1908 and 1909. It celebrates Wales' first 100% 'Grand Slam' season, long before that phrase gained regular rugby currency, and also the earlier 9-6 defeat of the touring Australians (12/12/08). England 8-0 (16/1/09), Scotland 5-3 (6/2/09), France 47-5 (23/2/09) and Ireland 18-5 (13/3/09) all then fell to the Welsh, in the first season of French participation in what was to be the Five Nations tournament, and hence the first chance of such a 'Slam'. The cup features a pair of detailed dragon handles, and the bowl is profusely engraved with thistles, roses and shamrocks, mounted on a rugby ball. Both sides of the bowl are engraved "Welsh Football Union Souvenir - Winners of 5 International Matches Season 1908-9" and "Matches Won Australia, England, Scotland, Ireland, France". Peter Owens, invaluable archivist of the WRU, explains: '….The Trophy that we have is on generous loan from Dick Thomas's grandson. I believe it has always been in the possession of the family and has not been offered for sale at any time. The Trophy is in the cabinet in the Players' Lounge. As far as I can see the ball at the base of this trophy is not split but the trophy does not sit correctly on the base, it is slightly raised at one end. Otherwise it is in excellent condition. The WFU's (as it then was) General Committee agreed that mementoes of the season, other than medals, should be given to players, committee members and officials. The secretary was given instructions to seek designs and quotations from jewelers for mementos at a cost not exceeding three guineas each. (Perhaps the limit explains why the trophies are not weighty items) On 17th June the committee instructed Capt. Rees to place orders for the mementos with Long and Co. and H.B. Crouch of Cardiff. The oval base is stamped Long, Cardiff, and the black stained wooden oval plinth is mounted with a silver-plated Australian crest and another crest featuring four Lions. At the Union's AGM on 1st July 1909 the clubs endorsed the committee's resolution. It is sometimes suggested that 'generous' trophy awards were in some way compensation for the enforced amateurism which hit the Welsh working man of rugby harder than many, and made Rugby League offers so frequently attractive and successful. I have strong doubts about that: they were small enough to be used as watch-chain fobs, after all, and even then the Union was not always moved to accept such trophy suggestions: Peter reports that the Minute Books record that in January 1909, for instance, the WFU turned down an offer from "H. Samuel, Jeweler of Manchester" to present all the Welsh players in the team that defeated Australia with Gold Medals. Perhaps understandably, the much-admired and sought-after medals do not surface very often. Considering that there were at least twice as many of the 1909 cups made, we should possibly expect a few more of them to appear in auction as the years go by - cracked rugby balls or not!

About the Author - Phil Atkinson is a former History teacher and Headteacher. He is President of Rhymney RFC and Editor of 'Touchlines', the magazine of the Rugby Memorabilia Society. He is the author of the Centenary History of Rhymney RFC, 'Rugby Union Memorabilia' and joint author of The King's Cup 1919: Rugby's First 'World Cup', published by St David's Press.