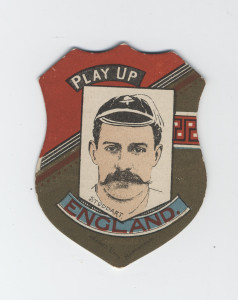 In February of 1889, during a test-match against the touring New Zealand Natives, England's AE Stoddart, whilst on the attack, lost a 'portion' of his shorts. As was the custom, Stoddart's team-mates formed a circle around him to protect his modesty whilst he collected himself. As this was taking place, to everyone's surprise, England's loose-head prop Frank Evershed took advantage of the distraction to score a try. Most of the 12,000 spectators expected sporting protocol to be followed and the try to be ruled out. To their surprise the referee awarded the score and England went on to win the match. The referee was RFU Secretary George Rowland Hill.