The museum has recently acquired a New South Wales (NSW) jersey that was collected by Tom Smith of Leicester during the 1908 Anglo-Welsh (British Lions) tour to Australia and New Zealand. 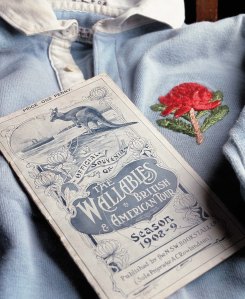 The 1908 tourists played NSW 3 times, winning twice and losing once. They did not play any tests against Australia, but lost two and drew one of three tests against New Zealand.

In Australian rugby's early days the union game was strongest in NSW. The national side often wore blue NSW jerseys when playing in Sydney and also when on tour, including on the Wallabies first trip to Europe in 1908/09. 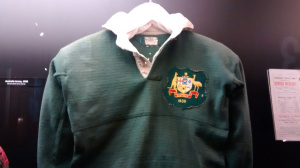 The Wallabies famous green and gold jersey was first introduced in 1929, although to avoid a colour clash it changed from predominantly green to predominantly gold when Australia toured South Africa in 1961.