This month's featured object from the World Rugby Museum's collection is a drawing by Dame Laura Knight (1877-1970), one of the most popular British artists of the first half of the twentieth century. Created using charcoal and poster paint, the drawing depicts a rugby player in a red jersey tackling another player in a black and white striped jersey who has possession of the ball. The drawing appears to have functioned as a preparatory study for a London Transport poster produced in 1921.

Laura Knight was born in Derbyshire. She enrolled at Nottingham College of Art in 1890, aged thirteen, and began teaching at the College only two years later. Knight would become well-known for painting scenes at the theatre and the ballet in London, but also worked as a war artist during both World Wars. In 1929 she was made a Dame, and in 1936 she became the first woman to be elected as a full member of the Royal Academy. This study shows Knight's idea for one of her most famous posters, 'Twickenham by Tram'. The drawing measures 75 x 51 cm (29.5 x 20 inches), whereas the final poster was printed at 'Double Royal' size - 101 x 64 cm (40 x 25 inches) - a standard poster size used almost exclusively by the railway companies. There are very few differences between this drawing and the design as it appears on the published poster, suggesting that the drawing represents a late stage in the artist's design process. On the poster, the tackler - wearing red - has his left arm completely wrapped around the other player's thigh. In the original drawing, however, the tackler's arm is not so tightly wrapped and his left hand remains visible. His right leg did not make it into the final poster either, the design having been shifted to the right in order to give the ball-carrier a more central position. 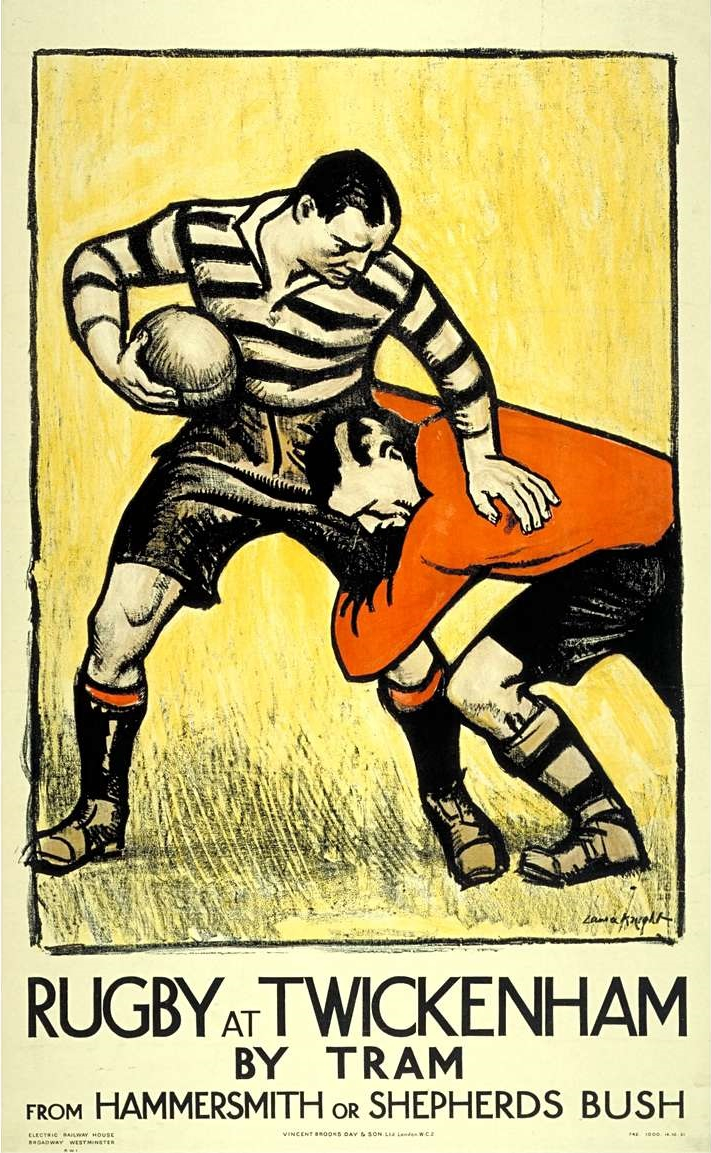 The figures are underdrawn in charcoal and definition has been added with red and black poster paint. A yellow wash has been applied to the background. The bold colours and thick lines ensure visibility and clarity, essential characteristics for a poster intended for display at busy stations. On the poster, Knight's image is captioned with the words: 'Rugby at Twickenham by tram from Hammersmith or Shepherds Bush'. The routes from Shepherds Bush and Hammersmith to Cole's Bridge, Twickenham, first opened in August 1902. During the course of the 1920s, the stadium would see a substantial increase in visitor numbers. The two existing stands at Twickenham were expanded and a third was also built, more than doubling the stadium's capacity. In 1921, the year in which this poster was published, England played two of their Five Nations games at Twickenham Stadium. England won both these games - against Ireland and Wales - and went on to win the Grand Slam. December 1921 also saw the first Oxford v Cambridge Varsity Match held at the stadium, a win for the Dark Blues of Oxford. How different those momentous occasions might have been without the crowds of spectators who had traveled to 'Twickenham by Tram'!