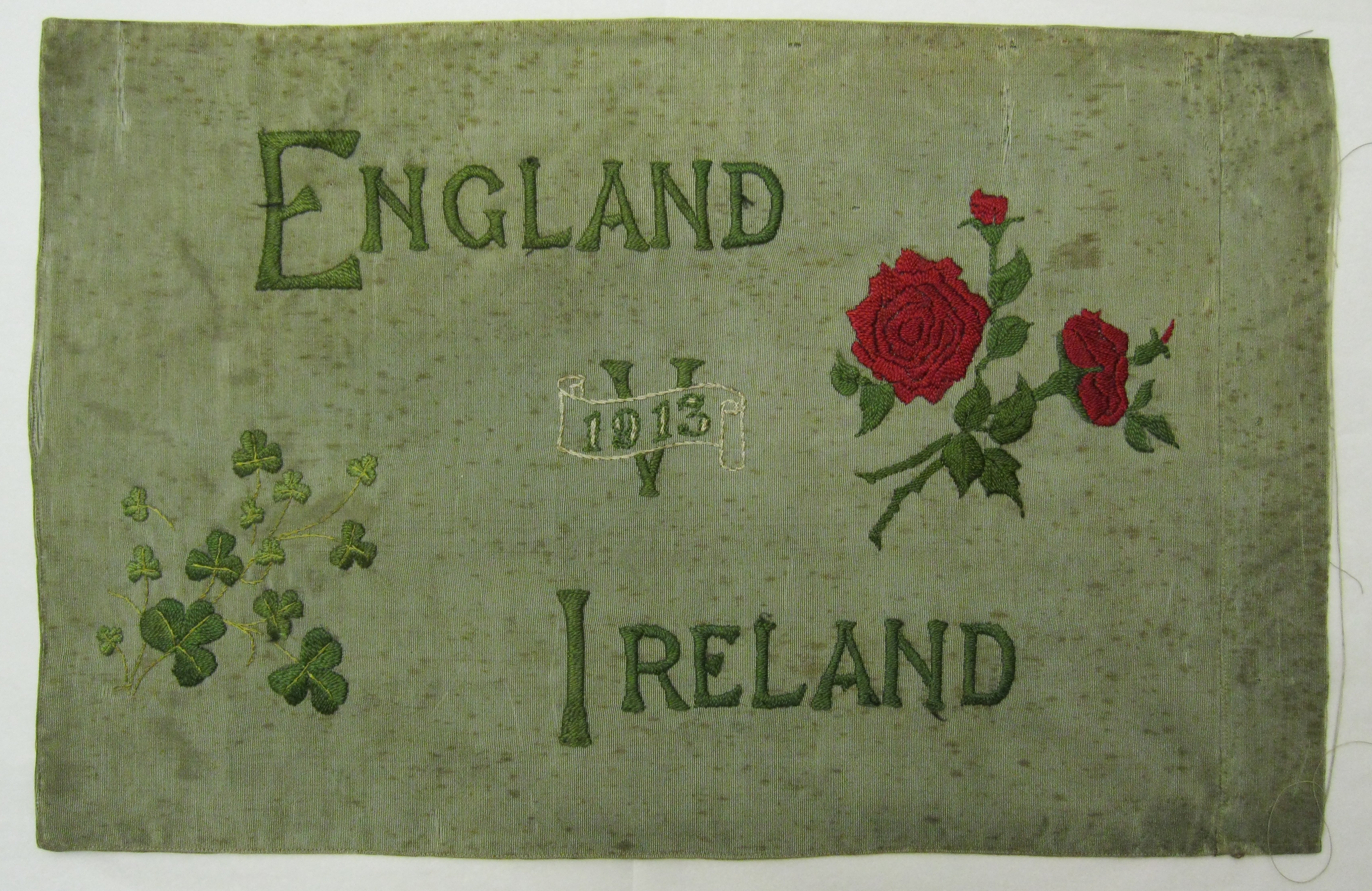 Following the Guinness Six Nations fixture between England and Ireland at Twickenham this weekend, we wanted to highlight this early touch flag from the collection at the World Rugby Museum. This green flag was used in the Ireland v England Five Nations fixture played in Dublin on 8th February 1913. The design, embroidered on both sides, features Irish shamrocks at the lower left-hand corner, the English rose at the upper right-hand corner and 'Ireland v England' at the centre. The flag would have been carried by a touch judge, to be raised when the ball - or the player carrying it - went into touch. The flag measures 43 x 28 cm. The design would have been marked out onto the fabric before being embroidered. The two rectangular pieces of fabric would then be stitched together along three sides, with the completed embroidery facing inwards. This could then be turned inside out (or rather, outside in) to conceal the raw edges of the fabric. The fourth side would then be sewn up and fixed to a short wooden stick to create a handle. The maker of the flag is unknown. As the fixture was played at Lansdowne Road, it is probable that the flag was produced locally. Played in front of a crowd of 15,000 spectators, the Ireland v England fixture of 1913 saw the hosts overwhelmed by the English forwards. England established a nine-point lead in the first half through tries scored by forward John Ritson and winger Vincent Coates. At this time, three points were awarded per try. John Greenwood also added a penalty for a further three points. Twenty minutes into the second half, Coates scored his second try of the match. Ireland's captain, Dickie Lloyd, then replied with a dropped goal from near the half-way line for four points. Renowned for his goal kicking, Lloyd would go on to hold the record for most international drop goals - seven in nineteen games - until the 1960s. England flanker Cherry Pillman added a late fourth try, resulting in a final score of fifteen points to four. It therefore seems likely that the flag might have been presented to the victorious team as a gift. Fragile with age and a little discoloured, this delicate touch flag is a reminder of an historic tournament for English rugby. The 1913 tournament would become England's first Five Nations Grand Slam, and their fourth Triple Crown. Remarkably, they conceded only one score during the whole tournament - the four points scored by Dickie Lloyd in this game. This remains the record for fewest points conceded by any winning team across a Five Nations or Six Nations season.