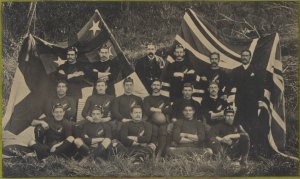 The 1888-89 "New Zealand Natives Football Team" took their final curtain bow on British soil on 27 March 1889. They were the first team of footballers from New Zealand to come north, and apart from hearing of their ferocious fighting against British forces during the 1860s "Land Wars", most Britons knew nothing of the Maori. By modern standards, heck, even old standards, it was a Rugby tour of epic proportions, beginning at Richmond with a game versus the Surrey County reps at the start of October 1888, and ending 175 days and 74 matches later against 'Southern Counties' in Leyton. The tour started and ended within the reaches of London, but in between the Natives (or to many "The Maori Footballers") traveled across the British Isles; still before the great divide of 1895, they met a cosmopolitan mix of famous Rugby clubs from England (Blackheath, London Welsh, Manchester, Swinton, Bradford) and Wales (Swansea, Cardiff, Newport), as well as County selections, the Universities (Oxford, Cambridge, Trinity-Dublin), and internationals (England, Wales and Ireland). Only one foray was made across the border into Scotland, for a game against the Hawick club. The SRFU refused to play the New Zealanders as they were touring under their own flag, without any sanction from the provincial Unions back home (the NZRU was founded in 1892), who doubted the team's true bona fides as amateurs. There's little doubt their suspicions were well-founded. The entire tour (with matches in Australia and New Zealand included) meant the 26 players were away from home for 13 months. No working man could be absent from his employment for such a long tour and afford to be paying his own way, even if his accommodation was provided for. It was estimated the tour would need £5,000 in the bank to cover expenses, and despite their misgivings, the provincial Unions helped arrange matches in New Zealand before the team sailed to supplement the promoters' wallet. The tour was organised and captained by Rugby footballer Joe Warbrick, who had played for New Zealand in 1884 against NSW in Sydney. His business partners in the venture were Thomas Eyton, the tour's promoter and treasurer, and James Scott, team manager. From the outset the tourists had been billed as an all-Maori team, and not a New Zealand representative side. Not dissimilar to the All-Aboriginal cricketers that travelled from Australia to England in 1868, the Natives tour was more than just about drawing a sports crowd, including cultural elements to pull in the curious, notably by wearing Maori clothing (coats, capes, skirts, headbands), armed with a 'mere' or 'patu' (single-handed weapons), and performing a haka ("Ake, ake, kia kaha" / Forever be strong). Ultimately perhaps only five of the tourists were full-blooded Maori, another five added at the last moment to bolster the team were 'Pakeha' (non-Maori), and the majority of mixed British-Maori bloodlines. Of their first game at the Athletic Ground in Richmond, one account suggested 50,000 had come to the town and thereabouts in the hope of getting a free glimpse of "the Natives". A local correspondent wrote, "At the ground itself there was a larger attendance than has ever been seen there before, and it is estimated that no fewer than 6,000 persons watched the match. Of these a large proportion were ladies, in fact I have never seen so large a gathering of the fair sex at a football match before." Another told readers "It was a very picturesque sight when the Maoris, in all the glories of their kiwi mats [clothing], went into the field…The Maoris, who were received with loud cheers from both the spectators and their opponents, soon divested themselves of their mats and filed across the ground. Their costume [playing kit] was all black, the only relief to its funeral aspect being a silver fern leaf on the breast." The "Pall Mall Gazette" confined itself to complaining that only five or six were fully Maori, adding "A team tattooed like Tawhiao [the second Maori King] would have attracted the public; a team which merely consists of muscular colonials without the facial picturesqueness will only draw the football world." They formed a reasonably talented combination; a record of 49 victories from 74 games (including a win over Ireland and a disputed loss to England) speaks highly for their skills and application, particularly over such a long tour, with the off-field attractions and indulgences it invariably brings. One notable inclusion was Thomas Ellison, a forward from Wellington who became the colony's first Maori solicitor. Minutes of the NZRU (16 April 1893) record that, on a motion put by Mr. Ellison, "It was resolved that the New Zealand representative colours should be black jersey with silver fern leaf." Six weeks later, with Ellison as captain, the first official New Zealand team made its international debut. Against New South Wales on the Sydney Cricket Ground, dressed in their black jerseys with silver fern leaf, the New Zealanders faced their foes and performed their haka.