With a fixture list already bristling with Welsh opponents by the end of the 19th century, and flush with the success of their new ground at Kingsholm, opened in 1891, it is perhaps unsurprising that the Gloucester club aspired to stage an international, and in the autumn of 1899 an application was made to the Rugby Union. The Club was proud to be awarded the game against Wales in January 1900, and put enormous effort and expense into elaborate preparations. Temporary stands were erected at a cost of £1,650, a telephone exchange was commandeered to provide facilities for the national press, and 30,000 tickets were printed. The arrangements met with widespread approval from both the rugby authorities and the press. Indeed The Sportsman commented "we have never seen better sight-seeing accommodation on any football ground in the United Kingdom". But the lack of any local interest in the England team selection, resistance to the ticket prices, and bad weather on the day conspired to keep the crowd down. In the event only 3,517 tickets were sold in advance and the eventual crowd was 14,600. 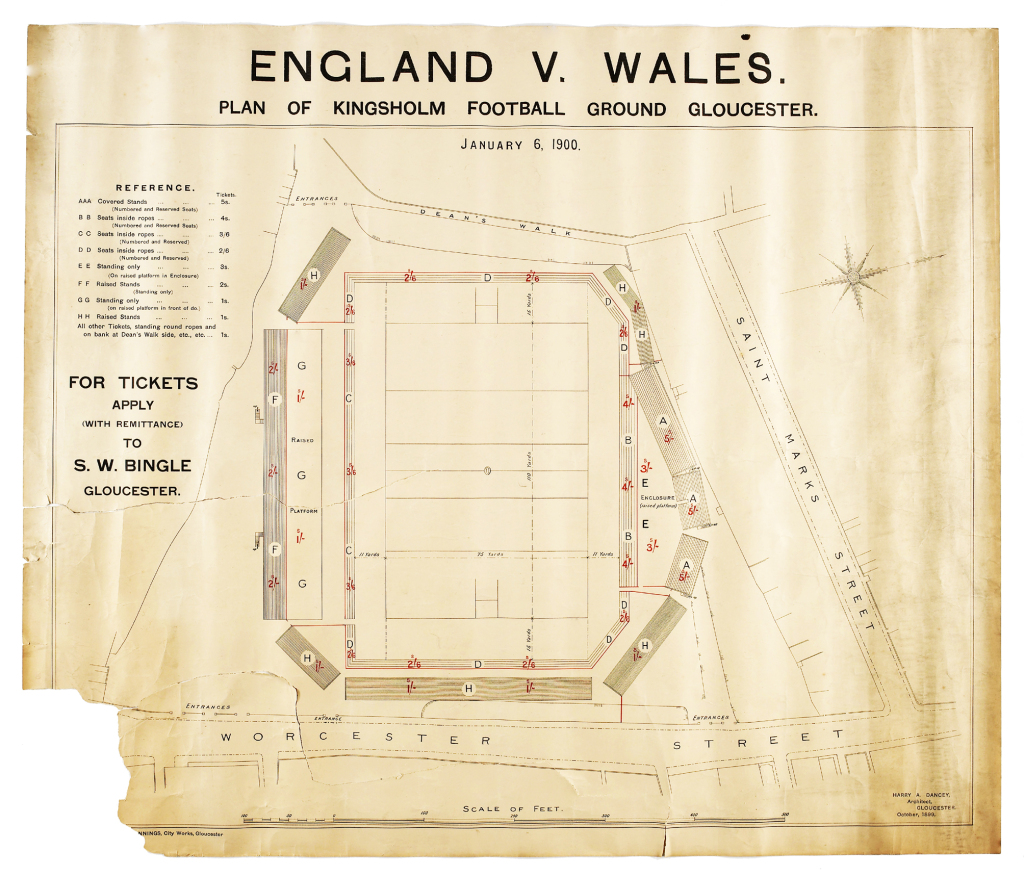 On the day one of the temporary stands collapsed with 200 people standing on it, but fortunately only one spectator suffered more than minor injuries. It was found that nails rather than bolts had been holding it together. A band entertained the crowd before the match, but when they struck up "Men of Harlech", the crowd started to stamp their feet in unison, and the Gloucester Citizen noted that "the first-aiders having tasted blood were on the alert with their gruesome apparatus", so the tune was quickly changed for fear of more stands collapsing. But the stirring atmosphere for which Kingsholm would become famous was already in evidence. A visiting Welsh commentator was moved to report that "the crowd was one of the merriest and best tempered I ever recollect to have seen, and when the chorus of "Soldiers of the Queen" was taken up with gusto it rather recalled the scenes of typical Welsh gatherings, when the people sing under every circumstance". 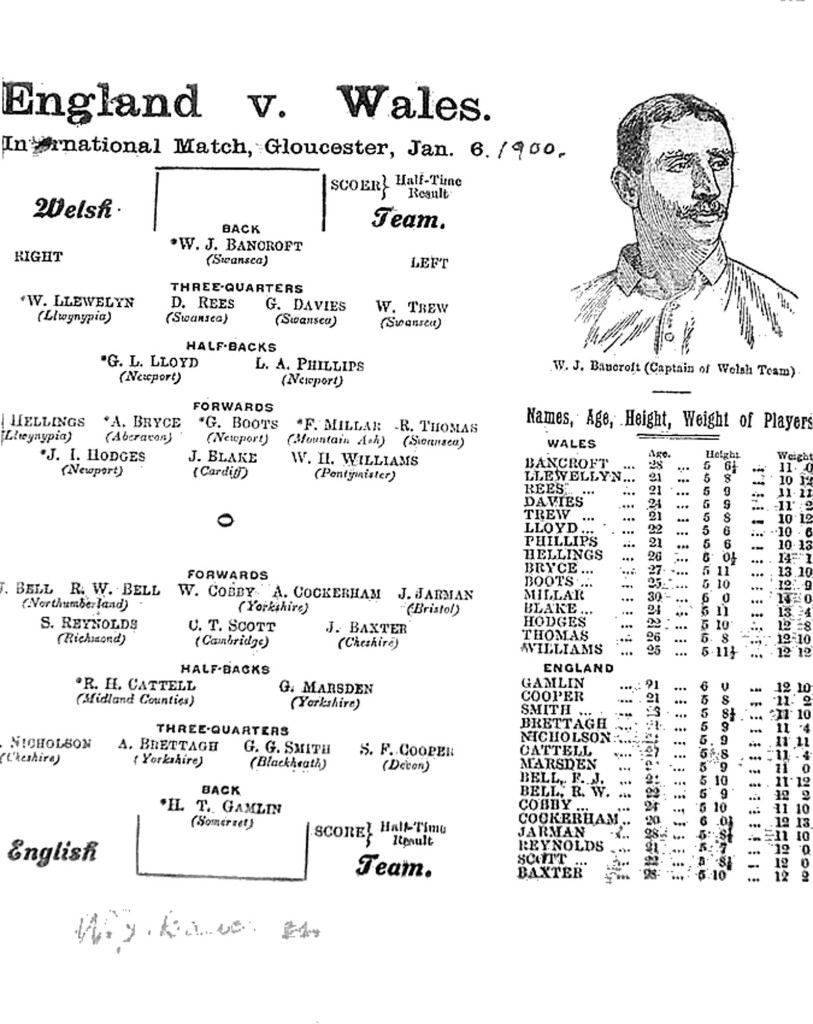 The tallest player was 6ft 1/2 ins, and the heaviest was 14st 1lb [Gloucester Rugby] 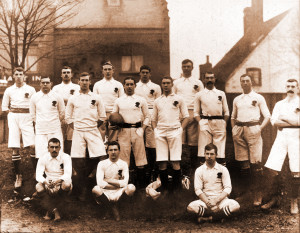 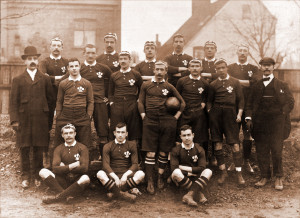 England won the toss, and decided to play with the wind from the Deans Walk end; Wales kicked off and had the better of it in the early stages of the game. The game was stopped for an injury to Dick Hellings, but he played on in great pain and with one arm not functioning properly (there were no substitutes allowed) - after the match it was found to have been broken just above the wrist. The Welsh pack gradually gained the upper hand, and most of the play settled down in the England half of the field. They resisted successfully for some time, but eventually the pressure told, and none other than theinjured Hellings crossed for the first try to Wales, Billy Bancroft converting. Although the England backs showed some promise, there was no further score before half-time. 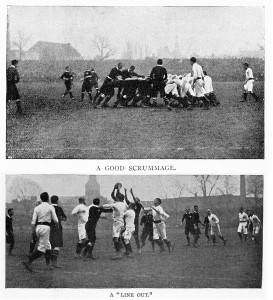 England went onto the attack after the resumption, and narrowly missed one scoring chance before Dick Cattell passed out to George Marsden, who sold a dummy and drew the fullback before passing out to Elliot Nicholson, who sprinted over in the corner; the wind took Herbert "Octopus" Gamlin's attempt at a conversion just wide of the posts. England came close to two further tries, and Wales were hanging on as the speed of the game increased, but back they came, and nearly all the Welsh backs handled in a move which put Billy Trew over for a try behind the posts, which Bancroft converted. Play went from end to end, but the Welsh finished the game the more strongly. Shortly before the end they were rewarded with a penalty kicked by Bancroft, and ran out winners by 13 points to 3.

The Press Association representative at the game was H V Jones, the former Gloucester player; he summarised the game as follows:

"It must be confessed that the game was a little disappointing, the play for the most part being only moderate. The Welshmen quite deserved their victory, but with a little luck the game might easily have gone the other way."

Unfortunately the match attracted a criminal element. Three young men from London were arrested at Gloucester station, and were sent to prison for loitering with intent to commit a felony. Pickpockets were at work at Kingsholm - one spectator lost his two purses, and another his watch - and a local public house was burgled during the game. The financial outcome for the Gloucester Club was even worse, since there was an overall loss of £665 19s 5d. They had overstretched themselves in seeking to make a success of the greatest match yet to be staged at Kingsholm. 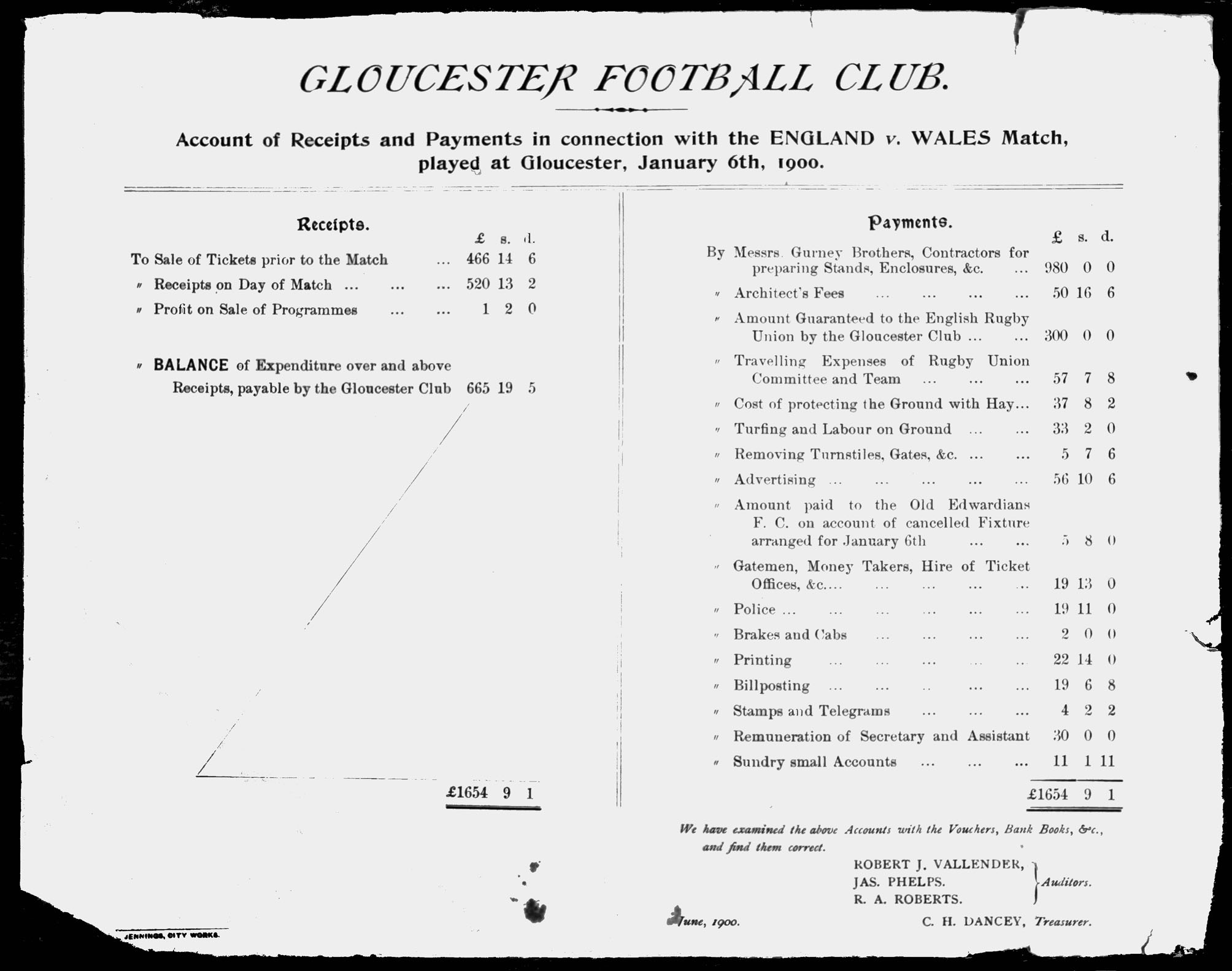 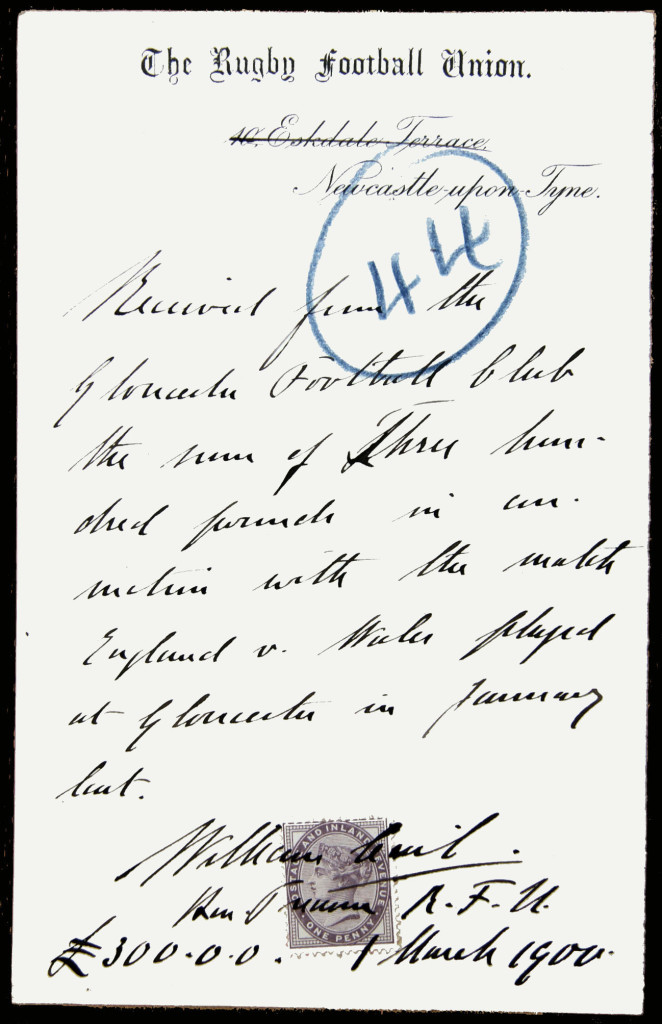 Some other events were quickly organised to resuscitate Club funds, which, together with additional subscriptions from some members, brought the deficit down to £584 15s 5d. An appeal was made to the Rugby Union to forego their guaranteed payment of 300. However, the Rugby Union refused, pleading that they had also suffered heavy losses on their trial matches and on the Ireland match played at Richmond. But they did award Gloucester a fixture against the Barbarians before the end of the season, and during the following season they made a grant of £50 to Gloucester to help keep the Club's head above water. It would take the Club several years to recover from the financial disaster which accompanied the honour of staging the international match. This militated against any thought of Gloucester bidding for another international in the near future, and, with Twickenham opening in 1910, it would be another 81 years before an England team next ran out at Kingsholm. However, the prestige of Kingsholm as a venue had been significantly enhanced, and more big matches soon came to Gloucester, with New Zealand, South Africa and Australia all making their first visits between 1905 and 1908.