As a young boy in 1984, I was heavily influenced by sport (as I am now). I was interested in most sports, especially sporting events on these shores. In football, I had Liverpool, a dominant force for the majority of the 1980s. In athletics, I loved the rivalry of middle-distance runners, Steve Ovett and Sebastian Coe, not too mention a pretender to the throne, Steve Cram. In rugby, I had started to go with family members to watch Cardiff RFC and was soon pretending to be Mark Ring, Gareth Davies or Terry Holmes in my back garden. At this point in rugby, I had not yet been influenced heavily by overseas teams, this was all about to change, Australia was soon to turn my young head, and new heroes were on the horizon. Before 1984, Australia had had some success on the rugby field in patches, but as of yet had not reached the heights of their Antipodean rivals, New Zealand. In 1983, an Australian side led by Bob Dwyer had lost a two-test series in France. Alan Jones, a relatively unknown coach to many outside of Australia, expressed his desire to become coach of the national side. Jones, had been a very successful coach at schoolboy level, but at senior level, had only achieved a success that year, when he coached Manly to the Sydney First Grade Premiership, beating a regular and robust powerhouse in Australian domestic rugby, Randwick, where current Australian captain Mark Ella played.

Alan Jones set about trying to gain support to be the coach, and with Dwyer's poor winning record as coach, he achieved many supporters. In February 1984, Jones was installed as national coach of Australia, and immediately set a target to become the best international side in world rugby. In mid-1984, Australia toured New Zealand in a three-match test series, losing the series and The Bledisloe Cup 1-2. Jones and his coaching staff turned their attention to the upcoming Britain and Ireland tour and set the marker of beating all the national sides during the trip. To achieve a Grand Slam. Before the tour, Jones took the step of removing the captaincy from outside half, Mark Ella and gave the role to Manly centre, Andrew Slack. Jones also made vice-captain for the tour, Manly lock forward Steve Williams. Jones had put players around him in leadership roles, who he trusted and had done well for him at a domestic level. With his coaches, Jones brought in Queenslander, Alec Evans, a coach widely respected in Australia, and renowned as a forward coach as his assistant coach. Evans would go onto coach Cardiff and Wales many years later, and would many times be a coach that Australia would turn to for advice, a fantastic coach. Jones also made Charles Wilson, a former Wallaby captain, team manager. Both recruits played a considerable part in the success of the national side and were inspired choices. The 1984 tour lasted over two months and took in 18 matches in total, with four tests within that itinerary. The first match was against London Division; a team made up of London-based clubs. The game was played at Twickenham. Australia coming out on top, 22-3. Five more matches followed before the first test match against the first Home Nations country, England. In those matches, Australia drew with South and South West Division, lost to my beloved, Cardiff and won the others. The next test would be England. On the 3rd November 1984, Australia faced England; the English side had some excellent players in their ranks such as Nigel Melville, debutant outside half, Stuart Barnes and Rory Underwood. At half-time, Australia was leading three points to nil, courtesy of a Michael Lynagh penalty. Lynagh played at inside-centre on this tour, not the position he became more renowned for, outside half, that shirt was worn by Mark Ella, a magician of a player in the number ten shirt, and the first try of the game came from his genius. Ella received a pass from young scrum-half and future great, Nick Farr-Jones from the base of a scrum. Ella ran across the pitch with the English defence transfixed by decoy runs from fullback Roger Gould and winger David Campese. Ella spotted a tiny gap and jinked through it, scoring under the posts. Michael Lynagh scored two further tries, but the fourth and final try was the pick of them all. Farr-Jones passing the ball to Gould who threw a long pass out to Ella who collected the pass low down, Ella found Campese who outpaced Rory Underwood. Campese was looking for support inside as the English cover defence came across. Just as he was about to be bundled into touch, Campese lofted a pass back inside to the ever supporting flanker, Simon Poidevin who dived in to score a fantastic team effort. Final score, England 3 Australia 19.

One week later, Ireland hosted Australia at Lansdowne Road. Australia led at half-time 0-6, courtesy of two drop goals, one from Lynagh and one from Ella. In the second half, three penalties from Irish kicker, centre Michael Kiernan put Ireland in front with only 17 minutes left to play. However, Ella managed another drop goal to have the game tied. Campese then received the ball, and with Ireland short of defenders, the ball got passed back inside to Ella who was able to get in for the try. A late penalty completed the win by Lynagh. Final score Ireland 9 Australia 16. Two test victories out of two, the Grand Slam was very much on. 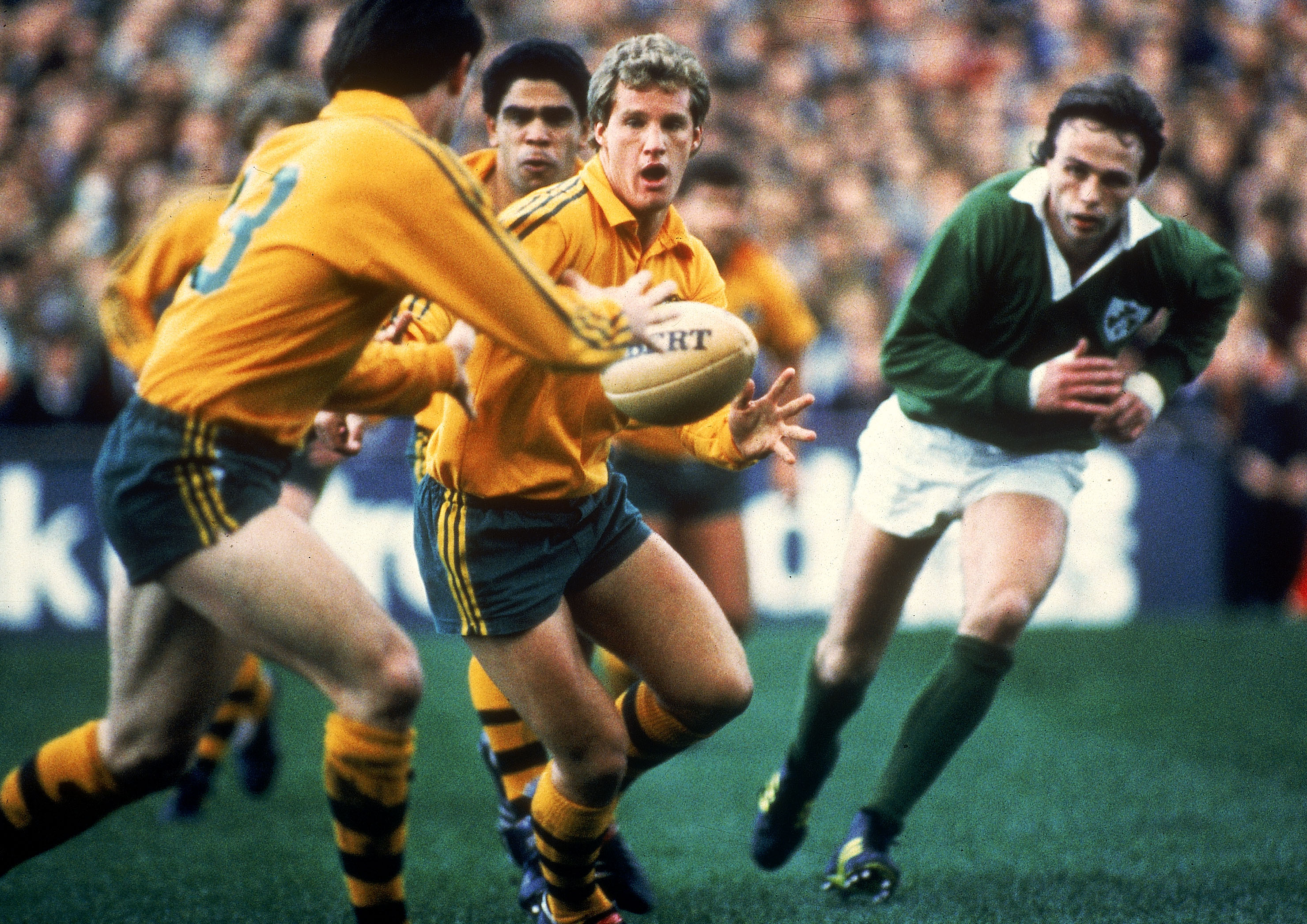 IRELAND - NOVEMBER 1984: Michael Lynagh of Australia in action during a Rugby Union match between Ireland and Australia held in Ireland, United Kingdom. (Photo by Getty Images)

The next international would be at Cardiff Arms Park, where Wales entertained Australia. It was a rainy day, and the pitch was muddy and heavy, not ideal for the brand of rugby that Australia was playing. However, the forwards for Australia were to show their metal. The pack made up of Topo Rodriguez, Tom Lawton, Andy McIntyre, Steve Williams, Steve Cutler, Simon Poidevin, Steve Tunyman and David Codey, dominated the Welsh pack. The first try was from a line out won by Cutler, a maul was set up, and Farr-Jones made a break down the blindside, his pass released Peter Grigg, and the bearded wing powerhouse, after a break passed inside to hooker, Lawton who plunged over the line. The second try, was again courtesy of a break by Farr-Jones, who passed onto Campese, the dazzling, sidestepping winger made many opposing players miss before passing onto Poidevin, who moved the ball onto Lynagh to score the try. The third try was courtesy of a 5-metre scrum, where the Australian eight, shoved their Welsh counterparts over the line, where number 8, Tunyman touched down for the score. Wales were next to score through scrum-half David Bishop; the only try Australia were to concede in test matches on tour, however, regular service was to be resumed when Ella intercepted a pass to touch down. Ella had now scored a try in each of the internationals on tour. Final score, Wales 9 Australia 28.

The Grand Slam decider was played at Murrayfield against Scotland. Fifteen minutes into the game, Ella threw a brilliant cut out pass which led to Campese scoring the first try. In the second half, Ella would complete his remarkable achievement of scoring a try in each of the internationals on tour. Ella did a run around with Gould which opened up the Scottish midfield for him to score. With fifteen minutes left, Farr-Jones would complete the try-scoring, by darting down the touchline following a planned two-man line out move where the scrum-half capitalised diving in at the corner. All Scotland had in response was four penalties from fullback, Peter Dods. Final score, Scotland 12 Australia 37. The Grand Slam was achieved, mission accomplished.

In a total of the 18 matches played on the tour, Australia won 13, drew 1 and lost 4. The Wallabies achieved the target of winning all the internationals, however winning is one thing, it is the manner that they won. Some of their play was stunning. The back moves they instigated, the speed of pass, elusive running, decoy runners fixing defenders was an absolute joy to watch. But they also could mix it up as they proved against Wales in poor conditions, when their forwards showed total domination up front, driving the ball on and playing to a more conservative approach. Players such as Campese, Slack, Lynagh, Ella, Farr-Jones, Rodriguez, Lawton, Williams, Cutler and Poidevin were indeed a match for anyone in their respective positions in the world. They had squad players of the ability of centre, Michael Hawker, wingers Brendan Moon and Matthew Burke and back-row forward, Bill Calcraft, hardly got a look in for the international games, just emphasising just how good this group of players were.

As a youngster I was star struck, this was the first international overseas rugby union team that I fell in love with. The style of play was a joy to behold, if you have never seen them, please check out the video clips on YouTube. You will not be disappointed. Mark Ella and the autumn of 1984 I will remember for many many years to come. The all-conquering 1984 Wallabies side, I thank you.

About the Author - Craig Muncey is a writer from Cardiff, Wales and co-author of Matthew Rees autobiography, "Reasons 2 Smile". His second book, 'Steve Fenwick: Dragon's and Lions' will shortly be available with St. David's Press. You can follow Craig on twitter @CraigMuncey