Keith Jarrett had sunk England at Cardiff in 1967; curiously it was his failure to place goals which contributed to their demise on this occasion. Twice his long kicks at goal were knocked-on by English fielders and Wales capitalised on these errors to score two tries and gain eight points. 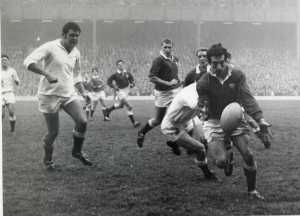 The English forwards played admirably; they outjumped the Welsh at the line-outs and Gale was outhooked by Pullin in the set-pieces. But unimaginative tactics in the English midfield off-set the advantage gained up-front, and Wales were allowed to get away from this match with a draw they did not deserve. Finlan was England's villain, for his kicking not only deprived the backs of attacking opportunities but lacked the probing accuracy required to place the Welsh defence under any pressure. England opened the scoring after seven minutes when a kick ahead by Lloyd caught the Welsh defence by surprise and McFadyean dived on the loose ball for a try. Then McFadyean dropped a kick at goal from Jarrett and Edwards dived over from the ensuing scrum. Next, a splendid run by the other scrum-half, Redwood, resulted in a try which Hiller, a recognised expert at place-kicking in the swirling Twickenham winds, converted into a goal. England changed ends nursing an 8-3 lead and looked set for a handsome win after Hiller again demonstrated his ability to land goals - a penalty this time - to extend the lead to 11-3. 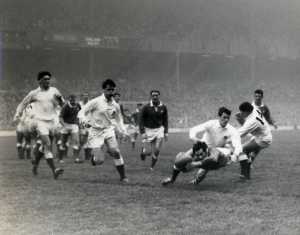 Jarrett stepped up to take a 60-yards kick at goal with the game approaching its last quarter. His soaring kick missed the goal but Hiller blotted his copybook by failing to gather the ball. From a scrum, Wanbon picked up and crashed over for Jarrett to convert. Barry John added a dropped goal to level the scores and, despite England's abundance of possession from the set-pieces, there were no further opportunities for either side to win an exciting match.