The second test in the 3-match series between New Zealand and France played in a gale at Athletic Park, Wellington on August 5th 1961 ranks as one of the most remarkable test matches ever played. The French team was on an historic first tour of New Zealand and Australia during which they were to play thirteen matches including three tests in New Zealand and two matches including one test at the end of the tour in Australia. France took the field for the 1st test match at Eden Park, Auckland on July 22nd having played four matches against provincial opposition. Although they had won their first two games against Nelson/Marlborough and Taranaki, they had then suffered a heavy defeat against Waikato and a narrow defeat against North Auckland so they were not fancied to win the opening test of the series. The All Blacks had picked six new caps for this test but still had the lethal boot of their powerful full back Don Clarke in his 15th test match and substantial experience in their forwards with the prop and captain Wilson Whineray playing in his 14th match and the formidable Colin Meads in the second row winning his 13th cap. The French picked three new caps and overall had a strong side. A trusted full back in Michel Vannier, the Boniface brothers in the centre, a half-back pairing of Pierre Albaladejo and Pierre Lacroix playing together for the 8th time combined with a mobile back row of Michel Crauste, Michel Celaya and Francois Moncla (their tour captain) represented the backbone of the team. And it was decidedly experienced - the three French back rowers alone had won more than 100 caps between them. 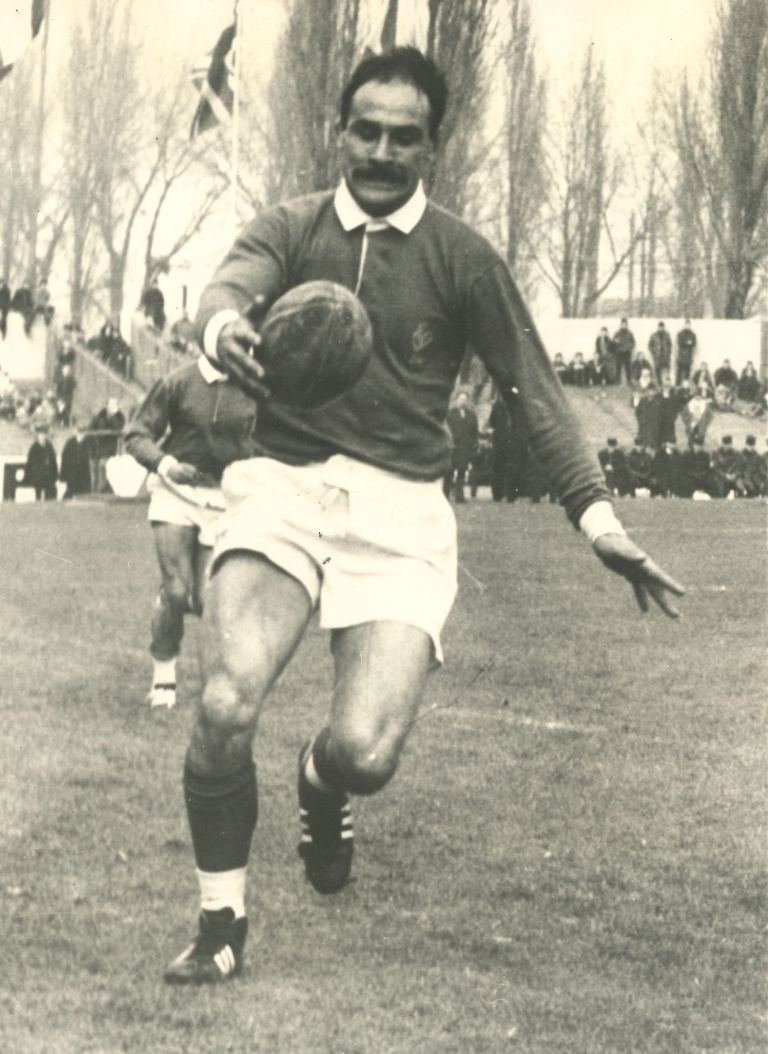 After conceding a converted try in the second minute, France recovered and was in the lead at half-time by 6 points to 5 thanks to two dropped goals by their fly half, Albaladejo. However the All Blacks dominated the second half and, after Don Clarke had kicked a drop goal from 40 yards just after half-time, they pulled further ahead with a converted try by their centre Terry O'Sullivan to win the match by 13 points to 6. The lead-up to the second test was mixed for the French team. They beat Bay of Plenty and Manawatu comfortably but lost to the NZ Maoris by 3 points to 5 in a very close encounter. The team the French selectors picked for the second test in Wellington contained three changes, all new caps. Claude Lacaze replaced Vannier at full back, Jean Pique was picked in the centre for the injured Guy Boniface, and Roland Lefevre was introduced at number eight with the veteran Michel Celaya moving into the second row for his 47th cap. The All Blacks also made three changes to their team. Ralph Caulton on the wing and Paul Little in the centre came into the backline and the marauding wing forward Kelvin Tremain replaced Stan Meads, brother of Colin, in the back row. The second test achieved legendary status because of the appalling conditions in which the match was played. TP McLean eloquently describes these conditions in "Cock of the Rugby Roost":

"During the night, the wind began to blow from the South. By morning, it was raging in from Cook Strait down the valley from Island Bay and on to Athletic Park. Powerful gusts reaching up to 79 miles an hour tore at the buildings and goalposts. The grass, even though it was only two or three inches long, was flattened into a silvery sheen as the squalls boiled down the field. If Monsieur Laurent (the French team manager) had had his share of preliminary torments, he must now have felt as if Satan himself was presiding over the fortunes of the team."

The New Zealand Rugby Union not surprisingly considered postponing the match but finally decided that it should go ahead as scheduled. The wind was so fierce that the newly built Millard Stand was hardly used and the anticipated crowd of 55,000 was reduced to around 35,000 spectators huddled together in the cold rainy conditions. Francois Moncla won the toss and elected to play with the gale behind France, presuming that the direction of the wind would change during the match. As a result the first half was a shambolic affair with many dropped passes and missed touch kicks, some of which landed behind the kickers. But France failed to take advantage as the wind increasingly blew across the ground. Although half-time came with the match scoreless, the momentum seemed to be with the All Blacks. For over twenty minutes of the second half, the All Blacks were on the attack. Colin Meads had a try disallowed just after half-time when the referee was unsighted and, following a late tackle on the 19 year old All Blacks fly half Neil Wolfe, Don Clarke missed what would ordinarily have been a sitter of a penalty just twenty yards from the posts. 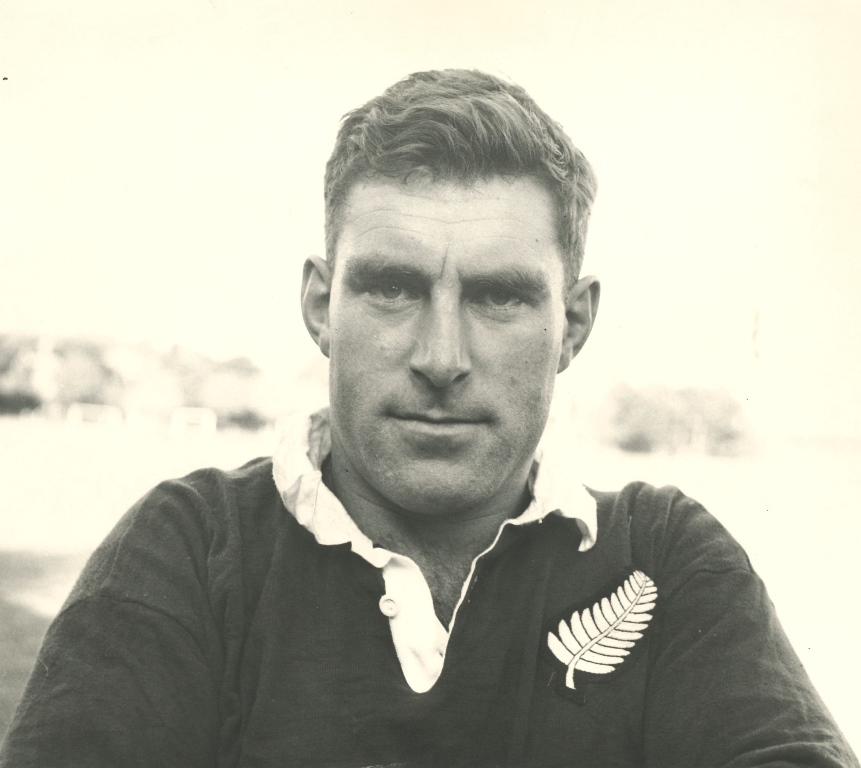 It was Neil Wolfe who finally made a critical mistake for the All Blacks with 15 minutes to go when he dropped the ball in his own half in midfield after a pass from his scrum half was blown off-course by the wind. The French centre Jean Pique picked up the ball and burst clear. Evading the clutches of the despairing All Black threequarters he bore left at speed towards the French flyer Jean Dupuy on the left wing. With impeccable technique, Pique drew the last remaining defender and passed to Dupuy who had 40 yards to go to the try line. No-one could catch him and Dupuy scored a thrilling try eight yards in from the left hand corner. Pierre Albaladejo had next to no chance with the conversion attempt in the teeth of the gale and he duly missed. The All Blacks now had 15 minutes to save the match and, three minutes later, they were saved by Kelvin Tremain's predatory instincts at the back of the scrum. Claude Lacaze received a pass from his scrum half and tried to kick for touch. He failed to secure the necessary elevation and Tremain caught the ball in mid-air and fell over the line 10 yards in from the corner. All now hinged on the conversion attempt of Don Clarke. Clarke took the ball to the 25 and kicked almost straight across the field. Unbelievably, the wind played its part and carried the ball at almost right angles to its original path and over the posts. New Zealand now led by 5 points to 3 and France's chance for an historic victory to level the series had gone. All that was left was another failed penalty attempt by Don Clarke from 40 yards before the match ended with the All Blacks very relieved winners of an extraordinary encounter. 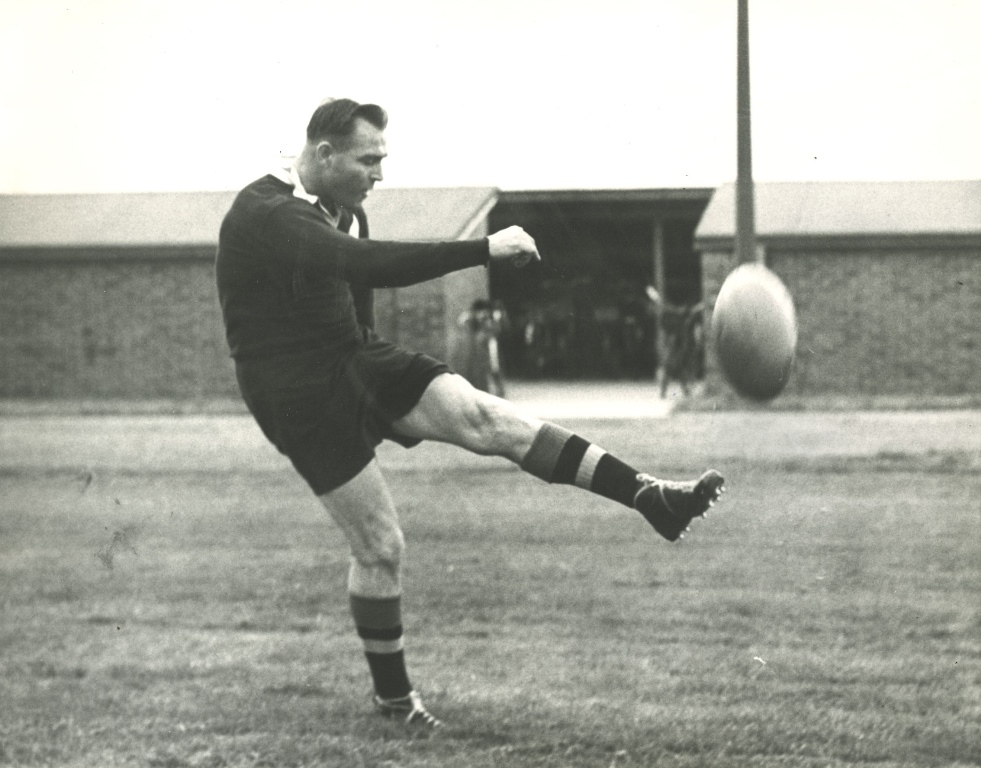 By the time the 3rd test was played on August 19th, the French team was running out of steam and they were heavily beaten by 32 points to 3 at Lancaster Park, Christchurch gifting a 3-0 deserved series win to New Zealand. Sources: