In the early days of Five Nations rugby it was common for international matches to feature ornately embroidered touch-flags such as this one that was used at Landsdowne Road in 1911. This particular match was much celebrated in Dublin as Ireland recorded a first win over England since 1907. 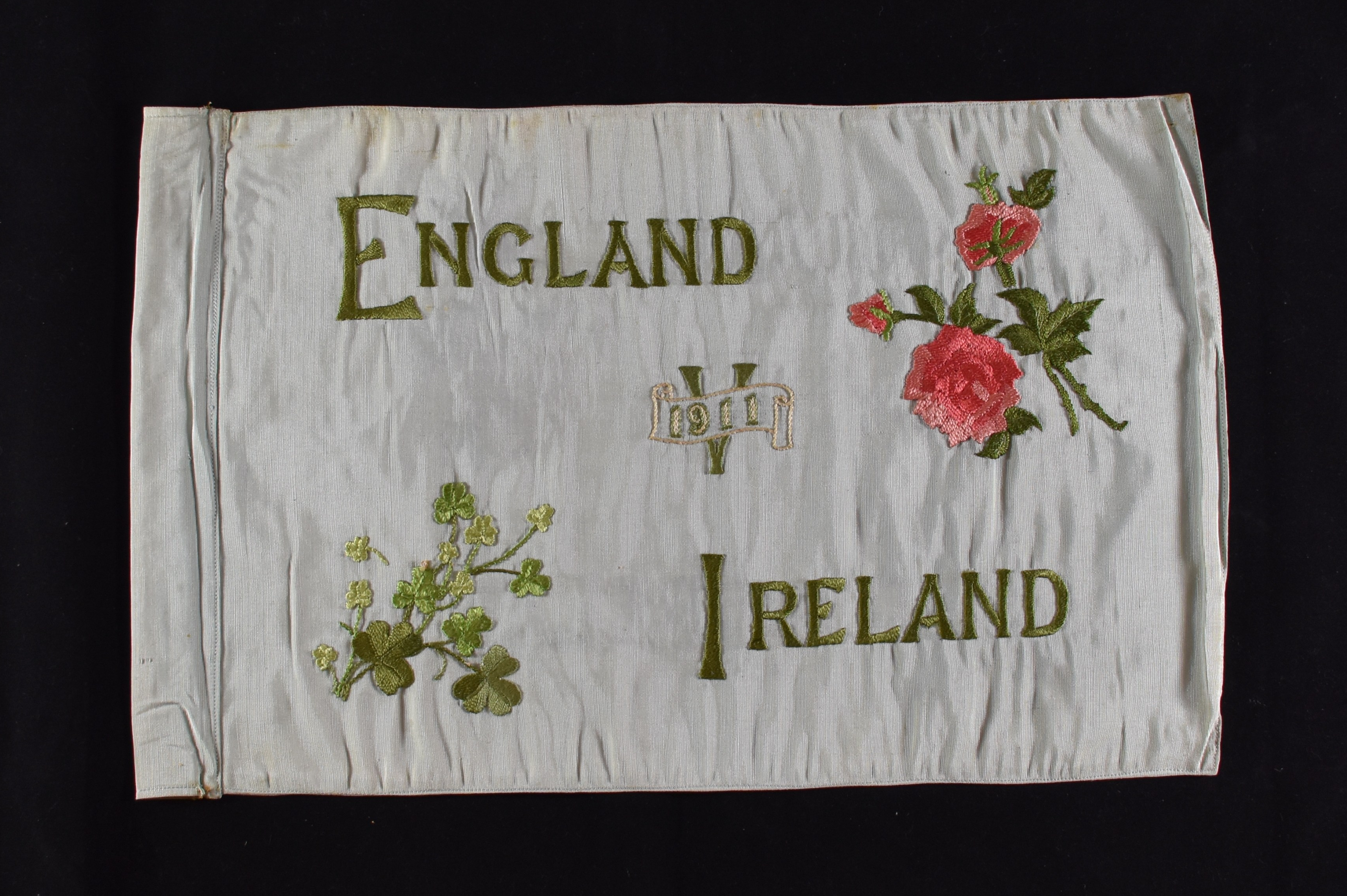 The match was a close affair. England were reigning champions and wing Danny Lambert had scored no fewer than 22 points against France two weeks earlier. He was ably assisted by John Birkett at centre and the Stoop brothers (Adrian and Tim). Aware of the threat posed by the English backs, the Irish half-back pairing of Dickie Lloyd and Harry Read chose to pin the visitors in their own half with accurate place kicking. The tactic was successful and a spirited performance by the Irish pack, captained by veteran George Hamlet, kept the visitors at bay and eventually forced the error that lead to the game's only try, scored by Ireland's Tom Smyth. A frantic rear-guard defence followed as Ireland held out until the final whistle. In the crowd a schoolboy named Robert Collis, who himself would go on to win seven caps for Ireland, savoured the moment. He later recounted the experience in his book ' The Silver Fleece':

The great match between England and Ireland, about 1911, when Ireland won by one try to nil, remains in the minds of many the greatest match of all time. The story of the match is commonplace enough. Ireland score off a forward rush just after half-time, and then held out against a most determined English attack till the whistle blew. Such a description, however, in no way represents what happened in reality that early spring afternoon. Thirty thousand people forgot who they were, dropped their masks and became a mob, a herd, with but one will Unionists and Nationalists, Ulstermen and Munstermen, Catholics and Protestants, and unathletic intellectuals who had been brought protesting by their families, and became affected alike. All yelled "IRELAND" till their throats only emitted a croak. When Ireland scored we all went mad. We stood up and yelled and yelled and yelled; a man from the West near us lost his hat-threw it away; we roared in triumph, all restraint gone. During the desperate English counter-attack toward the end the excitement rose higher; the cheering rolled backwards and forwards from one side of the field to the other in waves, sometimes sinking almost to a sob when our men seemed about to be overcome. At last the whistle blew for "time". The tension broke, and with one accord the crowd rushed on to the ground to carry off victor and vanquished alike, shoulder high.