Frederick Whitehead (1853-1938) was born in Leamington Spa into a humble family of bricklayers, but his father had a strong interest in painting and set up an art restoration business from the family home. Surrounded by Leamington artists and enthusiasts, Frederick and his sister were encouraged to attend the Leamington School of Art, and subsequently studied in Paris before touring the French countryside together for inspiration. He is known today for his pastoral landscapes, particularly of Warwickshire, where he grew up, and then Dorset, where he settled for the remainder of his life. 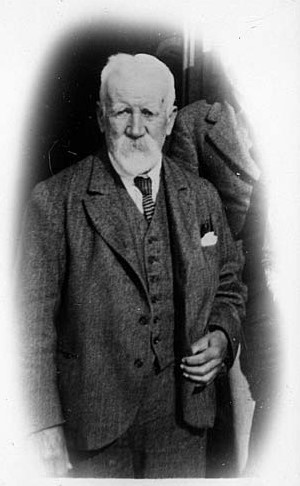 He was an eccentric individual, who travelled across Dorset with his sister Elizabeth in a horse-drawn Romany caravan called 'The Rambler'. In order to paint in all the elements, Whitehead would erect a tent-like contraption affectionately known as 'The Baby Elephant', inside which he would use oil or watercolour to depict the scene before him. 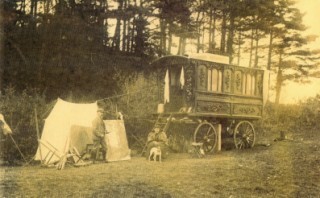 'The Rambler' and 'The Baby Elephant'

The siblings became known throughout the region as a delightfully unconventional duo, and Whitehead made friends with the highest and lowest of the land. He met the woman who was to become his future wife, Beatrice Case, who was the daughter of a Dorchester tradesman and a locally celebrated pianist. The two enjoyed a long and happy marriage, with Beatrice often joining the excursions across Wessex in 'The Rambler'. He additionally idolised Constable and developed an intimate friendship with the novelist Thomas Hardy; both men influenced his work immensely, driving his focus towards evocative country landscapes. It therefore seems curious that such an artist would stray into architecture in 1906 to paint both the Grammar School in Stratford-Upon-Avon and, of course, Rugby. However, as a historic landmark of his home county he perhaps felt it an essential addition to his portfolio. 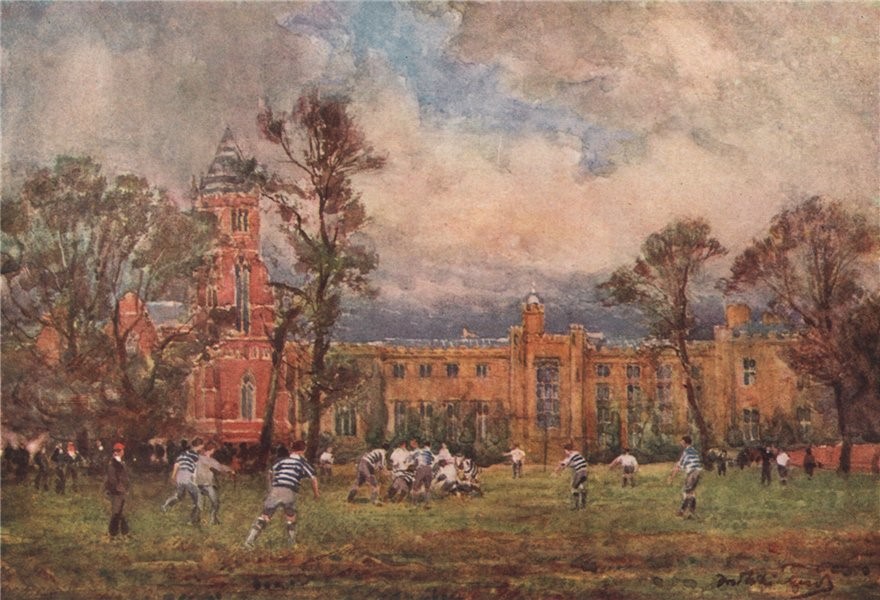 It is certainly an iconic view, with the Butterfields chapel behind and the boys playing rugby in front of the institution at which the game was invented. It is likely to have been inspired by the numerous attempts artists have made of the scene prior to his, and it is particularly interesting to compare it to the earlier work by E. Harwood entitled 'Football at Rugby'. 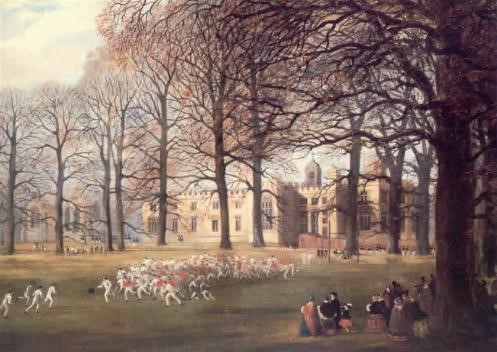 This shows the same view painted 47 years before in 1859. Notably, in Harwood's work the chapel has not yet been built, and there are far more players engaged in the game. In 1859 the game was still evolving and there was no limit on the number of players per side, and as such, the games were much larger. On one notable occasion in 1839, the school held a match between 'School House' - a side totalling 75 - and 'The Rest', which totalled 225! In Whitehead's image you can see that the team is much more manageable, and the renowned scrum has come into being, with the boys fitted in more practical gear. Though the artist himself had no particular interest in or knowledge of Rugby as far as we know, he has managed to give us an interesting insight into the evolution of the sport. There is little attention given to Whitehead as an artist and individual, and we therefore do not know the precise motivations behind his Rugby watercolour, or even its whereabouts. However, as an atmospheric and culturally rich piece, it ought to be given a place among the artistic canon of Rugby football.

About the Author - Cecilia Neil-Smith is reading Victorian Literature, Art and Culture at Royal Holloway, University of London. She has been part of the World Rugby Museum team since 2019.