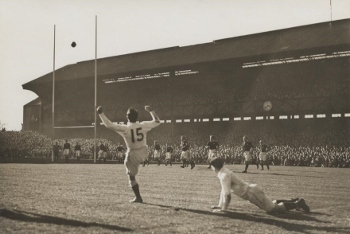 It is only today in extremely windy conditions in Rugby that we see a team mate hold the ball in place for a kicker to make his shot at goal. It was once the case that all place-kicks at goal had to be taken in that manner, without a kicking tee, and with some added complications that only the young minds of English public schoolboys could invent. Whether a conversion attempt after a try, a penalty goal shot, or opting for a place-kick from a 'fair catch' taken in general play (which was allowed to be claimed anywhere on the field), the kicking process had to involve two players from the team - the kicker, and the 'holder' or 'placer'. Rugby's laws in the 19th century and well into the 20th specified that the ball was 'live' 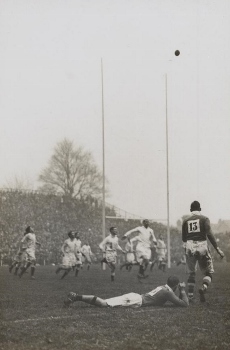 once it touched the ground, even if it was fumbled in error. As can still be seen in American football (which began in the 1870s by using the RFU's playing laws), the kicker's boot connects with the ball moments after it has been held in place by his trusted team mate. The opposing team was free to charge at the ball, the holder, and the kicker, in the hope of tumbling one or all of them over and disrupting the shot at goal, or even gaining possession. In the case of conversion or penalty goal attempt, any player could be chosen by the skipper to undertake each of the kicking and placing roles. Most teams had two trained players who were usually assigned these tasks. In the case of a player claiming a 'fair catch', if a place-kick at goal was to be attempted, he had to be the placer. The slow evolution towards today's Rugby goal kicking laws, where kicking tees are the norm and the only 'charging' allowed is from post try conversions, began just after WW1. In 1925, to upscale the severity of punishment of a penalty, it was decided that charging would be banned for penalty kicks at goal, and the kicker could now place the ball freely, without any assistance from a team mate, nor worry about having to time his approach 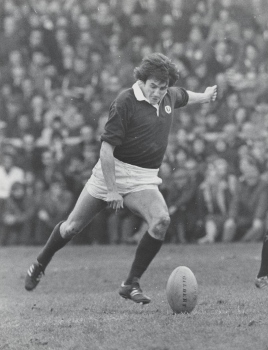 and kick the ball just as it was being put on the ground. In 1958 the need for a player to be the 'placer' for post try conversions was also abolished, however, charging continued to be allowed, the moment the kicker began his approach to the ball. Today, a manufactured kicking tee mutely serves its purpose, the untroubled kicker can move in to the ball when ready, and if overly enthusiastic defenders 'charge' early, an unsuccessful conversion attempt can be re-taken. So look fondly upon the players dutifully 'charging' the kicker, it is the last vestige of what was once a rubric only a true Rugby devotee could fully comprehend and appreciate.

© Copyright - Sean Fagan 2014 About the Author - Sean Fagan is a sports historian and writer based in Australia. He has written several books including 'The Life and Times of Dally Messenger' and 'The First Lions of Rugby', details of which can be found on www.SaintsAndHeathens.com The World Rugby Museum would like to thank Sean for contributing this article.