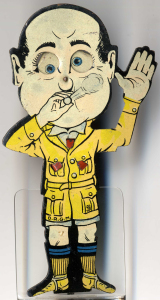 When the Laws of the Game of Rugby Football were agreed following the formation of the RFU in 1871, no provision was made for the use of independent arbiters.

Instead the captains on either side would agree on whether an offence had been committed etc. The laws simply stated that: "The Captains of the respective sides shall be the sole arbiters of all disputes." There was no mechanism for further appeals in the event that an agreement could not be reached. This changed in 1875 when provision was made for the appointment of an umpire, but one was not mandatory. In the absence of an umpire, the captains remained the sole arbiters. However, the laws then went on to say: "If the Captain of either side challenge the construction placed upon any rule, he shall have the right of appeal to the Rugby Union Committee." What the reason for the change was, we are unable to establish. In 1885 came a further change. At their meeting in September 1885, the Rugby Union Committee agreed to a draft of Regulations for the Guidance of Umpires and Referees. For the first time, the term 'referee' was used in relation to the rugby union game. The roles of the referee and umpires were distinct and their appointment was mandatory. 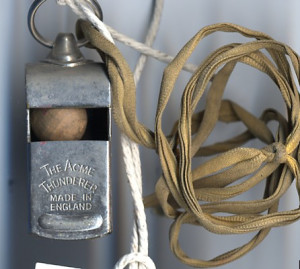 The referee was to be chosen "with the consent of either the representative Secretaries or Captains of the contending Clubs or bodies". No mention was made of how umpires were chosen. Further provision was made for the umpires to carry sticks and for the referee to be provided with a whistle. The RFU minutes do not give any specific reason for this change. They simply record that, at the general meeting held on March 25, 1885, "It was proposed by A G Guillemard (Past President) and seconded by G Rowland Hill (Hon Sec) that the Committee be instructed to consider the duties of Umpires and to draw up Regulations for their guidance…" However, it is possible that the reason for the change had its roots in the dispute between England and Scotland about a try awarded to England during the Calcutta Cup match played in March 1884. The dispute could not be resolved between the two countries and led to the formation of the International Rugby Football Board (IRFB) in 1896. The RFU did not join until sometime later. The suggestion that this dispute was the reason behind the change in the laws at this time is perhaps given credence by the minutes of the IRFB meeting on December 5, 1887 that record: "That the Board approve of the rugby union Rules of 1885 and adopt them as the rules under which the International matches be played." In 1889 the laws were modified to allow for the appointment of either two touch judges or two umpires. Where it was decided to use touch judges, their function was confined to giving decisions on touch play on the side of the ground they were appointed to look after. They did not have the powers of the umpires, which passed to the referee. The RFU minutes do not record the reason for this change. A further change was made in 1893, laws making it mandatory for the appointment of a referee and two touch judges. The referee was provided with a whistle and the laws specified the circumstances in which it should be blown. The touch judges were provided with flags in place of sticks. Unlike sticks, which were raised to indicate the fact that the umpire agreed with an appeal, flags were to be held up only when and where the ball went into touch. These laws were adopted at the RFU general meeting held on September 15, 1892, but the minutes do not record why the changes were thought to be desirable. These roles have essentially been kept to the modern day, although exact designations and responsibilities have been modified. 1866- Two umpires must be provided (Rugby School Laws) 1871- "The captains of the respective sides shall be the soles arbiters of all disputes" (RFU Laws) 1875- Umpires may be appointed if desired, otherwise as in 1871 (RFU laws) 1884- Scotland v Wales fixture: one referee but no umpires 1885- Two umpires and a referee required 1889- Two umpires or two touch judges and a referee required (RFU laws) 1893- A referee and two touch judges required. About the Author - Gill Hagger is a researcher, cataloguer and stadium tour guide with the World Rugby Museum.