On January 2nd 1886 towards the end of the first half of their match against Wales when they were leading by two tries to nil, the English forward CH (Charles) Elliot caught a miscued kick for touch by the Welsh full back DH (Harry) Bowen on the full and claimed a mark. Instead of taking the kick himself, he handed the ball to the renowned dual cricket and rugby international AE (Andrew) Stoddart who proceeded to kick the first goal from a mark in international rugby. From 1871 to 1977, a goal from a mark (GMk) could be scored when a player on the attacking side caught a ball kicked by the opposing side before it touched the ground. At the same time as catching the ball, the player needed to be stationary and had to plant the heel of one of his feet in the ground. This was deemed to be a fair catch and permitted the attacking side to consider a free kick at goal which could be taken by any of the players on the attacking side. If the ball travelled between the posts from this free kick, a goal from a mark was scored. When points scoring was introduced in the 1890s, a GMk was worth 3 points in the 1890/91 season; 4 points from the 1891/92 to 1904/05 seasons; and 3 points from the 1905/06 season to its abolition in 1977 when GMks were replaced by free kicks where a direct attempt to kick a goal was not permitted. In total only 27 goals from a mark were scored in 26 international rugby matches between 1886 and 1977. 14 of these GMks were scored before the 1st World War and some of these goals had a significant impact on the results of individual games as well as ensuring legendary status for some of the matches and the kickers of these goals. In February 1887 when Scotland beat Ireland convincingly in Belfast, the Scottish forward CW (Charles) Berry opened the scoring in the first half with a GMk. Four years later, on the first British Isles tour of South Africa, the English full back WG (Willie) Mitchell played in all 20 tour matches and kicked a GMK, the only points of the match to defeat South Africa 3-0 at Kimberley in the 2nd test of the three-match series. Once again it was a miskick that let to Mitchell making his mark just outside the 25 line and under a yard from touch. In the words of a South African newspaper, "Mitchell made a shot for goal. The ball flew direct for its mark and, landing on the cross bar, bounced between the uprights. Great applause greeted this splendid feat." 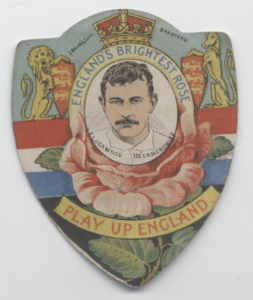 In January 1894 England surprisingly thrashed Wales 24-3 at Birkenhead Park during which RE (Dicky) Lockwood and HH (Henry) Taylor each set a new English record by scoring 9 points in an international match. Taylor's tally included a goal from a mark made by the English centre, CA (Charles) Hooper. A year later in an extraordinary match at Raeburn Place in Edinburgh for which the length of the pitch was reduced by 15-20 yards because the North end of the pitch was frozen, the legendary Welsh full back WJ (Billy) Bancroft kicked a drop goal from his own mark but in a losing cause as Wales were defeated by Scotland 4-5. In February 1897, Ireland defeated England 13-9 in a frenetic match at Lansdowne Road. The powerful Lansdowne right wing LQ (Larry) Bulger set a new Irish record by scoring 7 points in the match including an important GMk that took Ireland into a 10-3 lead at half time.

The final GMk of the 19th century was scored by the West of Scotland forward WJ (William) Thomson in Scotland's 21-10 victory over Wales on March 4th 1899, a match that had been postponed four times due to the grounds being frozen. The early 20th century saw the arrival of the All Blacks on the international scene. In their first ever international against Australia in Sydney in August 1903, their full back WJ (Billy) Wallace - another of the all-time great full backs - set a new world record by scoring 13 points in their 22-3 victory. His 13 points uniquely included 2 goals from marks, the only time that feat was accomplished in the history of international rugby. In January 1904 the Welsh full back HB (Bert) Winfield saved the day by kicking a GMk from just inside the English half right at the end of the match to secure a 14-14 draw against England in Leicester. 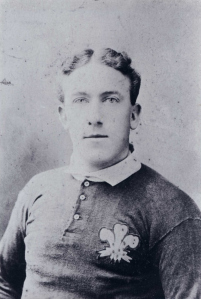 Later in 1904 a British Isles team toured Australia and New Zealand, playing three tests in Australia and one in New Zealand. One of their stars was the elusive Welsh fly half PF (Percy) Bush who scored a record 11 points including a GMk in their 17-3 victory over Australia in the 2nd test in Brisbane. In February 1906, the young Cambridge University winger KG (Kenneth) MacLeod kicked an important GMk to help secure a 13-6 victory for Scotland in Dublin and, a year later, the Irish centre and future champion tennis player JC (Cecil) Parke kicked a GMk to open the scoring in Ireland's 17-9 victory over England. The 14th and final pre-war GMk was scored by the Queensland full back, PP (Phil) Carmichael, in Australia's very heavy 6-26 defeat to the All Blacks in Sydney in the 1st test of their 1907 tour to New Zealand.