In Calcutta on the 25th of December 1872, a game of rugby was played between a team of ex-pats from England and a mixed team of Scots, Irish and Welsh. The match proved a success and provided the impetus for the Calcutta Football Club to be formed in January 1873. Four years later the Calcutta Club sadly folded in 1877 and the decision was made to melt the remaining 270 silver rupee coins from the Club's bank account to create the Calcutta Cup. Captain, Honorary Secretary and Treasurer of the Calcutta Football Club, G. A. James Rothney highlights this in his letter to the Honorary Secretary and Treasurer of the Rugby Football Union, H. I. Graham Esq. on the 20th of December 1877. 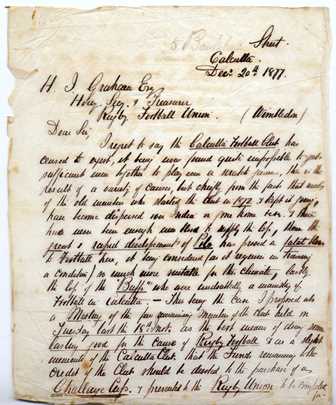 'I regret to say the Calcutta Football Club has ceased to exist, it being now found quite impossible to get sufficient men together to play even a scratch game…This being the case I proposed at a Meeting of the few remaining Members of the Club held on Tuesday last the 18th inst. as the best means of doing some lasting good for the cause of Rugby Football & as a slight memento of the Calcutta Club, that the Funds remaining to the credit of the Club should be devoted to the purchase of a Challenge Cup & presented to the Rugby Union.'

The letter from Rothney provides an insight into the development of rugby throughout the world. Various reasons were given for the decline in popularity of rugby in Calcutta. Rothney himself explains the constraints in his correspondence to Graham, including, 'that many of the old members who started the club in 1872, and kept it going, have become dispersed over India or gone home…(and) the great & rapid development of Polo has proved a fatal blow to Football here; it being considered (as it requires no training or condition) so much more suitable for the climate.' In addition to these reasons, it has been suggested that there was declining interest in the club after the cessation of the accompanying free bar, but no such mention was made by Rothney. For the use of the cup, Rothney suggested that it could 'be competed for annually in the same way as the Association Cup;' however, citing the potential difficulty of organising all clubs to participate, the RFU accepted the trophy as a challenge cup for international use. The Calcutta Club subsequently presented the trophy to the Rugby Football Union in 1878, making it the oldest trophy in international rugby. These were very early days for international rugby, with only two other countries playing rugby against England at the time - Scotland and Ireland. Due to Ireland's sub-par performance up to 1877, with five defeats and no points scored in five games, the RFU decided to use the cup for their annual encounter with Scotland. A silver plaque on the base reads: 'The Calcutta Cup Presented to the Rugby Football Union by the Calcutta Football Club as an international challenge cup to be played for annually by England & Scotland 1878.' 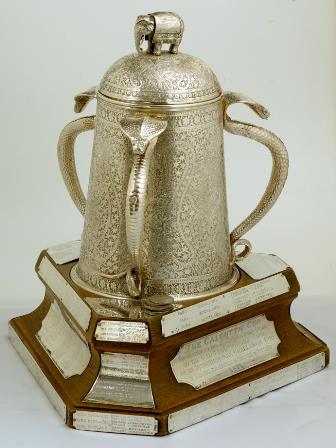 The final result from the Calcutta Club was a large silver loving cup with a lid. It is heavily engraved in an artistic pattern, with three handles in the shape of king cobra snakes. Standing proudly on top of the lid is a small elephant. Rothney describes the cup in a letter dated 31st of October, 1878, 'the Cobras are carefully copied from actual specimens and the elephant is...of the Vice Roy's stock. The cup is of pure silver 270 rupees having been melted down for its manufacture…its exact weight being now 265 3/4 rupees.' The Cup now sits on a two-piece wooden base, which has attached to it numerous silver plaques, each engraved with the dates and results of matches the Cup has been played for. The first Calcutta Cup match was played at Raeburn Place, Edinburgh, on 10 March 1879, in front of a crowd of 10,000 spectators. The trophy was not awarded however as the game ended a draw, with both sides scoring a goal. The following year England became the first team to win the trophy when they defeated Scotland by two goals to one at Whalley Range, Manchester. To this day, the Calcutta Cup is awarded to the victors of the England v Scotland match during the Six Nations tournament.