January, 1978. It's a cold Sunday morning in Buckinghamshire, and England are playing a training match against a local county XV. A twenty-one-year-old prop from Aylesbury Rugby Club is about to make a tackle he'll never forget. 'England used to train in those days at Bisham Abbey, and they wanted a side to play on the Sunday morning', recalls Gary Pearce. 'So Bucks put out a side. Fran Cotton was playing, and I tackled him - and unfortunately damaged his knee. He wasn't able to play in the first two or three England games that season. So it was like: "Who's this novice from Aylesbury who's injured our number one loosehead?"' Within a year of that incident, Gary Pearce was no longer the novice from Aylesbury who had injured an England player - he was an England player. It was a rapid rise which kickstarted a long international career; one which spanned 12 years, 36 caps and two World Cups, and one which saw him become, in 1987, England's most-capped prop. Pearce's story begins in Dinton, Buckinghamshire, where he was born in 1956. He jokes that he 'hasn't moved too far since then' as he sits in his house in the village of Stone - just two miles down the road from his birthplace. It's the village that his father worked in, as the catering officer at the local hospital, and also the village in which he attended primary school, before heading to the local secondary modern, Mandeville County. It was at that school that he first encountered rugby union. 'We played football one term, and then there'd be a term of rugby. We'd only play three or four games a year, but the big game was against Aylesbury Grammar School. They had regular rugby and had a very good side'. Despite him and his teammates regularly getting 'stuffed' by the grammar school kids down the road, those three or four games a year were enough to get the young Pearce hooked. He was soon spotted as a talented player, and after playing for his county side, had a trial for England under-18s. 'That was pretty daunting really', he recalls. 'Most of the players who were on the teamsheet, they were from the public and grammar schools, so there was always a feeling of "Hang on a minute, am I in the right place?" For me, coming from Mandeville County School, they must have thought: "Who the hell is he?" Pearce was unsuccessful on that occasion, but national recognition was not far off. Following the Bisham Abbey match and the tackle on Cotton, the young front-rower found himself invited to a trial at Northampton. He didn't immediately jump at the chance. 'For me it was a big move. It took a lot of persuading from people around me that wanted me to play rugby at the level they thought I could', he remembers. 'I just wanted to play rugby because I loved playing rugby, and for the social side afterwards, with the mates that you knew. Going from Aylesbury to a new club was a big, big step for me.' It was a step he decided to make though, and after a few trial games, the name 'Gary Pearce' became a fixture on the Saints teamsheet. But his meteoric rise didn't stop there; within a few months, England came calling. 'In the January of '79, I was asked to go on an England trial. We played England versus The Rest - I think I was in the "Rest" side. And then two weeks later, I found myself playing for England. It was like: I had no dreams of playing for England, I was plucked from Aylesbury and less than a year later I was in the Elizabethan Room at Bisham Abbey and my name was read out amongst all these - Uttley, Neary, Rafter, Beaumont - I was there! I think I must have gone white as a sheet.' 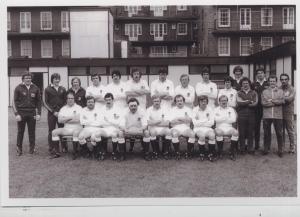 About the Author - Joe Hall, a PhD researcher at De Montfort University, is working in collaboration with the World Rugby Museum on a project titled 'An Oral History of England Internationals, 1945-1995'. Keep up to date with his progress @JoeEdwardHall