In 1909 Adrian Stoop led Harlequins out for Twickenham Stadium's first ever fixture. The following year he made history by becoming the first man to lead England out at their national stadium. But this season of triumph represented the culmination of a long walk to redemption for Stoop, who had been first capped for England in 1905. He amassed 5 caps during lean years for England before being dropped after a rout at the hands of the Welsh during the 1907 season. Rather than lick his wounds Stoop responded to the setback with characteristic alacrity. At the time a clear division between the roles of Fly Half and Scrum Half were beginning to develop in New Zealand and Wales, but England had so far been slow to respond. The success of the Harlequins and Stoop's system saw him reinstated as captain at the start of the 1910 season. Stoop's unpredictable style initiated a move that enabled England to land Twickenham's first international try inside the opening minute of the opening game against Wales. The score put England on course for their first victory against the Welsh since 1898. Later that year Stoop led England to their first Championship victory in eighteen years. Stoop was also responsible for brokering a deal with the Rugby Football Union that allowed Harlequins to play all of their home fixtures at Twickenham Stadium until 1963 when the side built thier own stadium which they named The Stoop Memorial Ground in his honour. In all Stoop earned 15 international caps, helping England to a share of the 1912 Championship along the way. He continued to play for Harlequins until 1939, retiring at the age of 56. He will always be remembered as the man who led England out of the post-1895 wilderness. 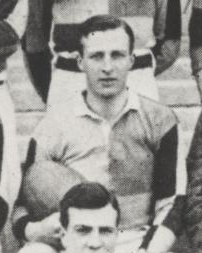