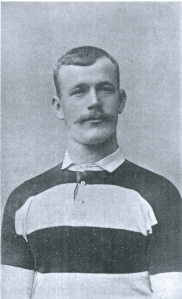 At a moving commemoration held on the evening of the 10th November each year, the villagers of Passchendaele honour the memory of the men of all nationalities who died during the Third Battle of Ypres (31 July - 10 November 1917), perhaps better known as "Passchendaele". Over half a million men became casualties in the battle but in order to personalise this horrendous human cost, the Passchendaele Commemoration focuses on the lives of just three soldiers who died. This year, one of the three was a rugby international. At least seven internationals died in the battle, including: James Henderson (Scotland), Albert Stewart (Ireland), Alfred Taylor (Ireland), Arthur Wilson (England) and two of the most famous rugby players to fall in the war, Edgar Mobbs (England) and David Gallaher (New Zealand). But it was the less well-known Welsh international, David Westacott, who was honoured at the 2015 commemoration.

This annual ceremony by the people of Passchendaele commemorates the end of the Third Battle of Ypres and the capture of their village by the Canadian Division on the 10th November 1917. This year over three hundred villagers took part, as well as government representatives from Belgium, Canada, New Zealand and Germany. Contingents of the Belgian, Canadian and German military were also present. The commemoration began just outside the village at the Crest Farm Canadian Memorial, with a reflection on the sacrifice of Myer Cohen of Canada, Hinrich Böttcher of Germany and, representing all the British soldiers who died, David Westacott. During a moving ceremony, an account of the life of each was read out and their photographs displayed at the memorial. This was then followed by a torchlit procession through the village to Passchendaele Church. "Dai" Westacott was a Cardiff docker. A tough and powerful forward, he played for seven seasons for Cardiff during one of the most successful periods in their history. The highlight of his club career was surely his participation in Cardiff's stunning 24-8 victory over Australia in 1908. He also played once for Wales in the match against Ireland in 1906.

Although a thirty-two year-old family man when war broke out, Dai was an early volunteer and consequently he saw much action on the Western Front. On the 28th August 1917, he was serving with the 2/6th Battalion Gloucestershire Regiment in the line north-east of Ypres, when he was caught by a random shell and killed instantly. He has no known grave and is commemorated, not far from where he died, on the Tyne Cot Memorial to the Missing. Dai is perhaps not the best known of the many internationals who died in the war, but it is gratifying to realise that his achievements and his sacrifice have been not been forgotten by the people of Passchendaele and Flanders. A fuller account of David Westacott's life and rugby career will be posted here on the centenary of his death.