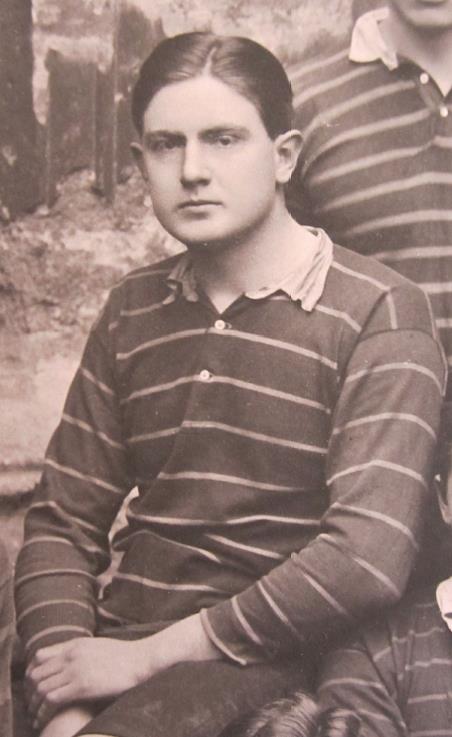 Reginald Harry Myburgh "Reggie" Hands was born in Claremont, near Cape Town, South Africa, one of three sons of Sir Harry Hands KBE and his wife the Lady Aletta Catherine Hands (neé Myburgh) OBE. Sir Harry was a British colonial politician, serving in the legislative assembly of the Cape Colony from 1912-1913, and in 1916-1918 he served as mayor of Cape Town. Sir Harry originated in Worcestershire, but his wife was South African. Reginald was educated at the Diocesan College, Rondebosch, known as Bishops, from where as a Rhodes scholar he went up to University College Oxford in 1907, took a degree in jurisprudence and became a lawyer, being called to the bar (Middle Temple) in May 1911. His rugby talent earned him blues in 1908 and 1909, and he also played as a forward for Manchester and for Blackheath. His brothers Philip and Kenneth also came to Oxford as Rhodes scholars, also gained blues and also played for Blackheath, though they did not match Reginald in being capped for England. He made two appearances in 1910, playing in England's away victories in Paris and Inverleith. Cricket also occupied the brothers, with Reginald (one) and Philip (seven) making test appearances for South Africa. Kenneth played in one unofficial test match. Reginald joined up in November 1914, going quickly to German South West Africa (now Namibia), with the Imperial Light Horse and then the Heavy Artillery. After the end of that campaign, and as part of a re-formed SA Heavy Artillery, he was then one of the volunteers going to the Western Front and was seconded, with his unit, to the Royal Garrison Artillery. On 21 March 1918 the Germans embarked upon a final attempt, "The Spring Offensive", to land a decisive blow before significant numbers of American troops could arrive at the front. Despite employing tactics that targeted command and logistical posts, and avoided more heavily defended areas, the German initiative ultimately failed. Reginald Hands was at this time second in command of his battery. During the Georgette Offensive he was badly gassed and succumbed to his wounds at Boulogne on 20 April 1918. Captain Reginald Harry Myburgh Hands is buried Boulogne Eastern Cemetery, Pas de Calais, France [Grave VII. A. 39.] 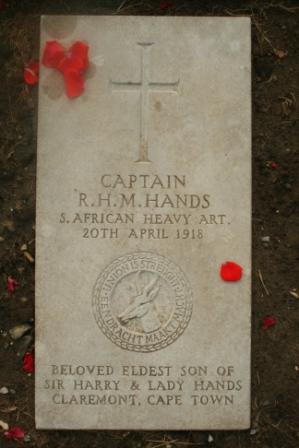 He is also remembered at the Diocesan College and at University College and the Oxford University RFC, as well as the memorial at Blackheath FC. In South Africa the Heavy Artillery has memorials bearing his name in Johannesburg, Kimberley, Cape Town and Port Elizabeth. Two others [Durban and Pretoria] bear no names. He did not marry.

For more information on the Rugby Football Union's First World War commemorations visit: http://www.englandrugby.com/about-the-rfu/ww1-commemorations For details of the other 26 fallen England players click here. The World Rugby Museum would like to thank Mike Hagger for researching and writing this article.