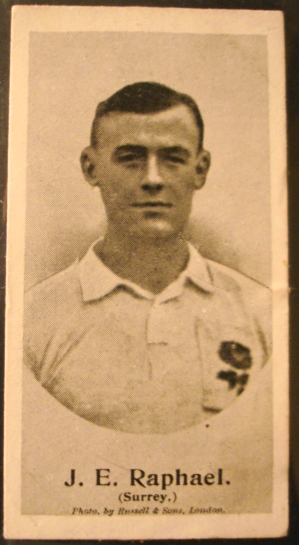 John Edward Raphael was born in Belgium and died in Belgium, though this did not prevent him becoming one of England's most accomplished sportsmen of his day, exemplified by the fact that at Oxford he won 14 Blues across four sports. This was two more than the legendary C B Fry, who has been described as England's greatest all-round sportsman. His father Albert was a stockbroker, whilst his mother Harriette hailed from Pembrokeshire. John was their only child, and was initially educated at Streatham School near the family home. He then went on to Merchant Taylors' and to St John's, Oxford where he read modern history. By 1908 he had been called to the bar at Lincolns Inn, and a year later he stood for parliament as the Liberal candidate in Croydon. Though unsuccessful, he did increase his party's vote to a record level. Cricket and rugby were his main sports; swimming and water polo his other Blues. He captained the school XI and, in 1904, Surrey CCC. For Oxford he remains the only batsman ever to score a double century against Yorkshire. At rugby from 1905 to 1910 he captained the XV for Old Merchant Taylors (OMT), for whom he played his club rugby, and he went on tour to Argentina in 1910 as captain of what eventually became the British Lions. He won nine caps for England as a three-quarter, spanning the years 1902-06, including playing against New Zealand during their inaugural tour of 1905-06. When the war came he was, like so many rugby players, one of the earliest volunteers, first joining the Officer Training Corps, and then being gazetted to the Duke of Wellington's West Riding Regiment, and finally to the Kings Royal Rifle Corps, where the 18th Battalion had been raised by his uncle Sir Herbert Raphael, MP for West Derby. He was wounded on 7 June 1917 at the Battle of Messines, which was a prelude to the much large 3rd Battle of Ypres (Passchendaele). He died four days later. 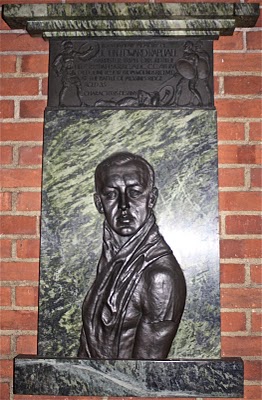 Photo courtesy of St Jude on the Hill

Lieutenant JOHN EDWARD RAPHAEL is buried in Lijssenthoek Military Cemetery Poperinghe, West-Vlaanderen, Belgium [Grave XIII. A. 30.]. He is widely remembered elsewhere, including at Merchant Taylors' School and by the OMT Society in its War Memorial Clubhouse. The Society lost 13 of its 1st XV from 1913-14, and two were disabled. His mother instigated the erection of a memorial plaque (right) at St Jude on the Hill, Hampstead Garden Suburb. Other memorials at Lord's (MCC), Surrey CCC at The Oval, St John's College, Oxford University RFC and Lincoln's Inn also bear his name. In the year after his death, his mother published his book "Modern Rugby Football". He did not marry.

For more information on the Rugby Football Union's First World War commemorations visit http://www.englandrugby.com/about-the-rfu/ww1-commemorations For details of the other 26 fallen England players click here. The World Rugby Museum would like to thank Mike Hagger for researching and writing this article.