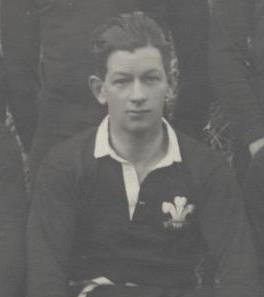 J M Clement 'Clem' Lewis was a talented fly half for Cardiff and Cambridge University either side of World War One, who won 11 caps between 1912 and 1923 and rose to captain Wales in the last two of those games. From Bridgend, where he attended the County School, he appeared for Porthcawl, Bridgend, Handsworth, London Welsh, Crawshay's and St Catherine's College, Cambridge, winning Blues in 1913 and 1919, while playing 229 times for Cardiff between 1909 and 1924. He captained them in 1920-21, and overall scored 62 tries and 11 dropped goals for the capital side, while also notching three tries, three conversions and a drop for Wales. He had been a Lieutenant in the Cardiff City Battalion of the Welch Regiment, being gassed and wounded. He was a colliery salesman, then a schoolmaster in Cornelly and was in the Civil Defence in the Second World War before, sadly, suddenly dying at his Porthcawl home in 1944, aged 54. The 1919 'King's Cup' was a round-robin competition held to celebrate the end of the First World War. Clem starred for 'The Mother Country', as the British Army was dubbed, in the 1919 competition about which veteran Cardiff journalist Howard Evans and Newport-based Rugby Memorabilia man Phil Atkinson have written a book. The competition, the world's first multi-national rugby competition and predating the first 'official' Rugby World Cup by almost 70 years, had a round-robin format between the forces of The Mother Country, New Zealand, South Africa, Australia, Canada and the newly-formed RAF, with many past or former international players, and a play-off for the title and the trophy to which King George V lent his name. The winners: surprise, surprise, New Zealand: who just days later beat France in a Challenge match, then Wales in what the WRU deemed a full-cap Swansea Test. They then accepted an invite to play some dozen and more games in South Africa, on their eventual way home from a war some of them had travelled 12,000 miles to join nearly five years earlier.

About the Author - Phil Atkinson is a former History teacher and Headteacher. He is President of Rhymney RFC and Editor of 'Touchlines', the magazine of the Rugby Memorabilia Society. He is the author of the Centenary History of Rhymney RFC and joint author of The King's Cup 1919: Rugby's First 'World Cup', published by St David's Press.