15 August 2016
Rugby returns to the Olympics

In 1892, Baron Pierre de Coubertin made his first speech at the Sorbonne University of Paris, calling for the revival of the International Olympic Games. Such sports exchanges, he said, would be the "new free trade" of Europe. 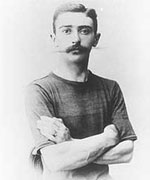 De Coubertin's original sporting love was rugby. Intrigued by what he had read about English public schools, in 1883, at the age of twenty, de Coubertin went to Rugby and to other English schools to see for himself. He described the results in a book, 'L'Education en Angleterre', which was published in Paris in 1888. The hero of his book is Thomas Arnold, Headmaster of Rugby: "the leader and classic model of English educators," wrote de Coubertin, "gave the precise formula for the role of athletics in education. The cause was quickly won. Playing fields sprang up all over England". What de Coubertin saw on the playing fields of Rugby and the other English schools he visited was how "organised sport can create moral and social strength". Not only did organised games help to set the mind and body in equilibrium, it also prevented the time being wasted in other ways. First developed by the ancient Greeks, it was an approach to education that he felt the rest of the world had forgotten and to whose revival he was to dedicate the rest of his life. Having watched the game in England where it was invented, he was one of the founders of the game in France, and set up the first French schools championship in 1890. He refereed France's first championship final between Racing Club and Stade Français at Bagatelle Park in Paris in 1892. In April of that year, he was instrumental in bringing Rosslyn Park FC to Paris, to play Stade Français. This was the first time an English club had played in continental Europe and aroused great interest on both sides of the Channel. When the match was announced, some of the London papers expressed serious doubts as to its advisability saying it might lead to 'International Complications' Rosslyn Park beat Stade by 3 goals and 3 tries to nil.

That very same year, suitably inspired, de Coubertin made the first public call to revive the Olympic Games: the first modern games were held four years later in Athens. Rugby was introduced in London 1908, with Australia beating Cornwall to the gold. But after unsavoury crowd behaviour at the France v USA final in Paris 1924, the sport was dropped from the programme, leaving USA as the reigning XV-a-side Olympic rugby champions to this day.A special commemorative sculpture, commissioned from Popineau Fils of Paris, was presented by Lord Dufferin the British Ambassador to Park captain E Figgis, and now resides at Rosslyn Park. The beautiful and delicate sculpture portrays a symbolic branch with French laurel leaves on one side and English oak leaves on the other. A medallion bears the date 18th April 1892. Did Rosslyn Park help to inspire those first Olympics? In 2006 the tradition continued with Park's mini players starring in the successful IRB (now World Rugby) video bid to make Rugby Sevens an Olympic sport in 2016.