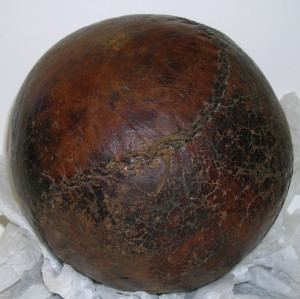 This round ball has been on display at the World Rugby Museum for many years. It was formerly a part of the private collection of sports journalist Harry Langton, who believed it to date from the 1820s. It weighs 1.8kg which means it was unlikely to have been used at Rugby School, but Rugby School's football was one of dozens of codes played in schools and universities around Great Britain at that time. Outside of educational establishments an even greater variety of footballing codes had been played on the streets and fields of Great Britain and Ireland for hundreds of years. Some of these, such as the annual Shrovetide game at Ashbourne in Derbyshire, were mass affairs with few rules. Others, such as the Campball game that was played around East Anglia, had strictly defined playing fields, participant quotas and rules. For now at least where and by whom this particular ball was used remains a mystery.

The Story of the Siam Cup

On 9th May 1945, the Channel Islands were liberated by British forces following five years of German occupation. During that period, one object – now in the World Rugby Museum – had a particularly lucky escape...
Read More