The University of California had taken up rugby in 1906, along with Stanford University, California's top athletic and academic rival. It was to be the start of a great rugby rivalry. Both teams were strong. In twelve seasons of rugby Stanford went undefeated three times and posted a record of 94 wins, 20 losses, and three draws. California won games too but hadn't won many games against Stanford since 1906. The 'Big Game' rivalry between California and Stanford would stop for three seasons during the war years of 1915, 1916 and 1917 but Stanford at least continued to play, with Santa Clara College taking California's place for three successive seasons. Santa Clara College was a Jesuit school having the name of the town in which it was located, and also the site of an old Spanish-colonial mission, a dozen miles south of Palo Alto and Stanford. Stanford, sometimes known as the 'Harvard of the West', was co-ed and had a few thousand students. The match was played at Ewing Field in San Francisco, home to the San Francisco Seals Baseball team, in front of a capacity crowd of 18,000. At the time it was the largest venue for such an important intercollegiate rugby match in the Bay Area. Despite losing the previous year Santa Clara rose to the occasion and won the match by 28 points to 5, inflicting on Stanford their first loss since 1913. They went on to finish the season undefeated and could legitimately claim to have the best rugby team in America. 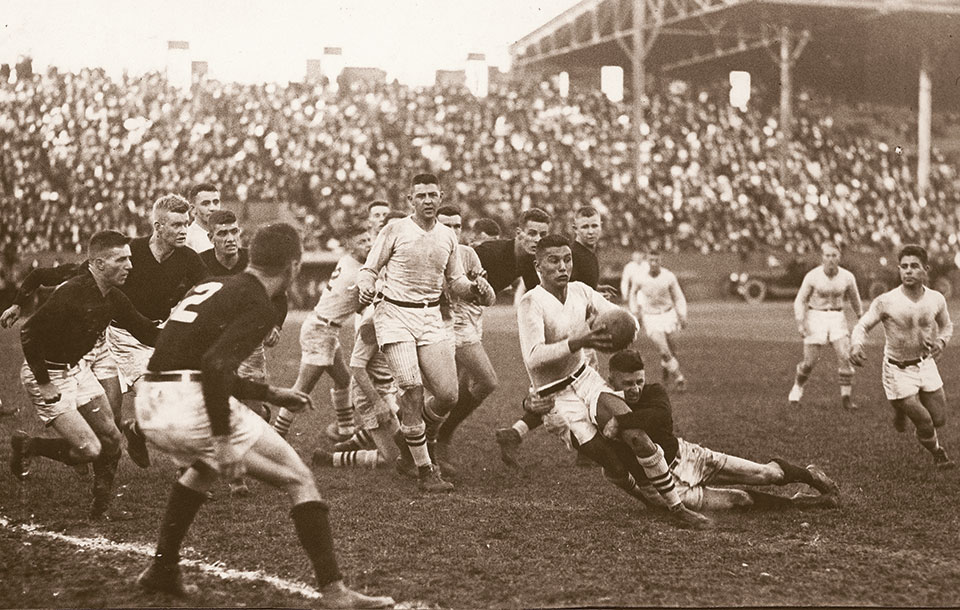 In the photo one can actually make out the baseball infield in the background. On the far right of the photo in the white shirt is Santa Clara's captain, Rudy Scholz, class of 1918, the team's scrum half. He and five other members of this team would eventually be selected for the American team that won gold at the 1920 Olympics in Antwerp. After graduation in the spring of 1918, Scholz would be commissioned a second lieutenant in the US Army after military training that summer, but the Great War ended as he waited to be posted to France. He returned to Santa Clara to study law, playing in 1919 on the school's reconstituted American football team at quarterback. He would continue to play rugby and American football with the Olympic Club of San Francisco following his law school studies, and became an attorney. He finally saw active service in Okinawa during World War Two, by then a major in the Army reserves. In later in life he became a player for the California Bald Eagles Rugby Club, a veterans side, and was in his early 80s when he played in his last game, in 1978, before dying of cancer in 1981 at the age of 85. Stanford, wearing the dark shirts, actually cardinal red, had its share of players on the Olympic team of 1920 and Danny Carroll, a member of the Australia team that won gold at the 1908 Olympics in London.

About the author: Larry Freitas is a former rugby player and a referee in the Northern California Rugby Union Referee Society. He started his rugby career as a freshman student (class of 1976) at Santa Clara University in 1973. After his university studies he played for the Santa Cruz Rebels and then after "retirement" from club rugby, for the California Bald Eagles Club, a veterans over 40 side. He is a retired History and English teacher living in the Monterey Bay Area in Aptos, California.