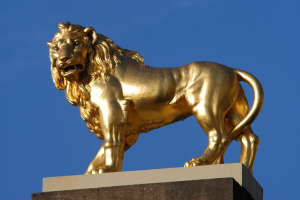 Visitors to Twickenham Stadium may be familiar with the golden lion that graces the top of the Rowland Hill Memorial Gates at the entrance to the West concourse. The lion has not always been gold. When he first arrived he was stone coloured - although he is not actually stone but instead a false stone, known as Coade stone. Coade stone was made in a factory owned by Mrs Eleanor Coade. She named her stone "Lythodipral" after a Greek word whose literal meaning is "Stone twice fire". Mrs Coade ran her factory from 1769 until her death in 1821. Her formula for the stone has since been lost. The lion was gilded in 1991, at a cost of £6,000 - greater than the cost of the original 10 ¼ acre plot of land purchased in 1907 for £5,572 12s and 6d on which the stadium now stands. But how did it arrive at Twickenham and where did it come from? A plaque on the gates states:

"This lion made of Coade's artificial stone stood in front of the Lion Brewery, Lambeth from 1837 to 1948 when the site was cleared for the Royal Festival Hall. It was preserved - with the lion now standing on Westminster Bridge - at the express wish of King George VI". 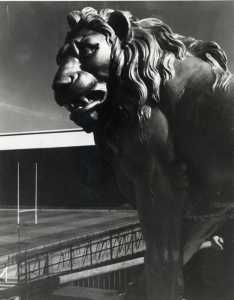 Whilst working with a tour guide who was developing an arts tour of the stadium, I decided to look further into the provenance of it. The RFU minutes from 1971 record that the lion was to be a gift from the Greater London Council (GLC) and that it would be presented by Sir Desmond Plummer, then leader of the council. It was in need of some repair at the time, but the costs, including those of its installation, were to be borne by the GLC. It was eventually unveiled on 27 April 1972. The personal memoirs of Harold Clark, formerly Clerk of Works at the stadium, record that the lion was one of a pair that once stood at Waterloo station. So, what had that to do with the Lion Brewery? On investigation, it was confirmed that a lion had indeed stood at the approach to Waterloo Station. However, there was only one and not two. The lion in question had been installed at Waterloo in 1951 and was removed in 1966 to make way for some redevelopment at the station. It had been painted red - British Rail's colour. Once removed from the station, it was cleaned up and re-sited at the South end of Westminster Bridge, where it still stands. That lion definitely came from the Lion Brewery, where it stood imposingly over the front of the building overlooking the Thames. Moreover, this is the lion that was saved at the express wish of King George VI. So, what about the one at Twickenham? Had it also once stood on the brewery? Searches led me to the Survey of London. This includes a description of the Lion Brewery and records that there were three lions on its top. One was over the front entrance, and was clearly the one that now stands on the South Bank. Two others stood over entrances at Sutton Walk and Belvedere Road. The one from Sutton Walk had disappeared some time before the Brewery was demolished in 1948 to make way for the site of the Festival of Britain. The other was removed at the time of the demolition. A photograph of it, taken when it was still in situ, bears a striking resemblance to the one we have here at Twickenham. Although we do not have that vital piece of evidence to show that this lion was the same as the one on the brewery, we are fairly certain that it is. What is certainly not true, was that it was saved at the express wish of King George VI. That accolade goes to the one on the South Bank. As a tour guide I like to point out that lions on buildings always face outwards as their purpose is to protect the inhabitants from any harm. Our lion also looks outwards but facing towards the West, thus protecting us from any harm by the Welsh. Of course this is said by way of a joke, but colleagues here decided we ought to test out whether there is anything in it. So, we looked at the results of all England's games against Wales played at Twickenham since 1910 (the first international at the stadium) before the lion was installed and the results since then to date. Interestingly analysis reveals that from 1910 until 1972, England won 46% of their matches in that fixture and since the lion was installed- 73% so, save for the occasional blip, the lion seems to be doing its job!

Come and see the Twickenham Lion for yourself by visiting the World Rugby Museum and taking part in one of our Twickenham Stadium tours.