On the 29th August 1895 at the George Hotel in Huddersfield, 22 rugby clubs met to discuss the cessation of their membership of the Rugby Football Union (RFU) and shortly thereafter proclaimed a new Northern Union. Initially the game that they would administer would be identical in every respect to that of the RFU with the exception that their players would be permitted monetary compensation for time spent away from the workplace- whilst playing rugby for club, county and country. Over time the Northern Union altered the rules, reduced the number of players per team and the sport we now know as Rugby League was born. Around the same time as this act of northern separatism another group of gentlemen were meeting in the town of Rugby. The Old Rugbeian Society (ORS), an informal group of Rugby School alumni, subsequently announced their intention to conduct a private investigation into the origins of rugby football. 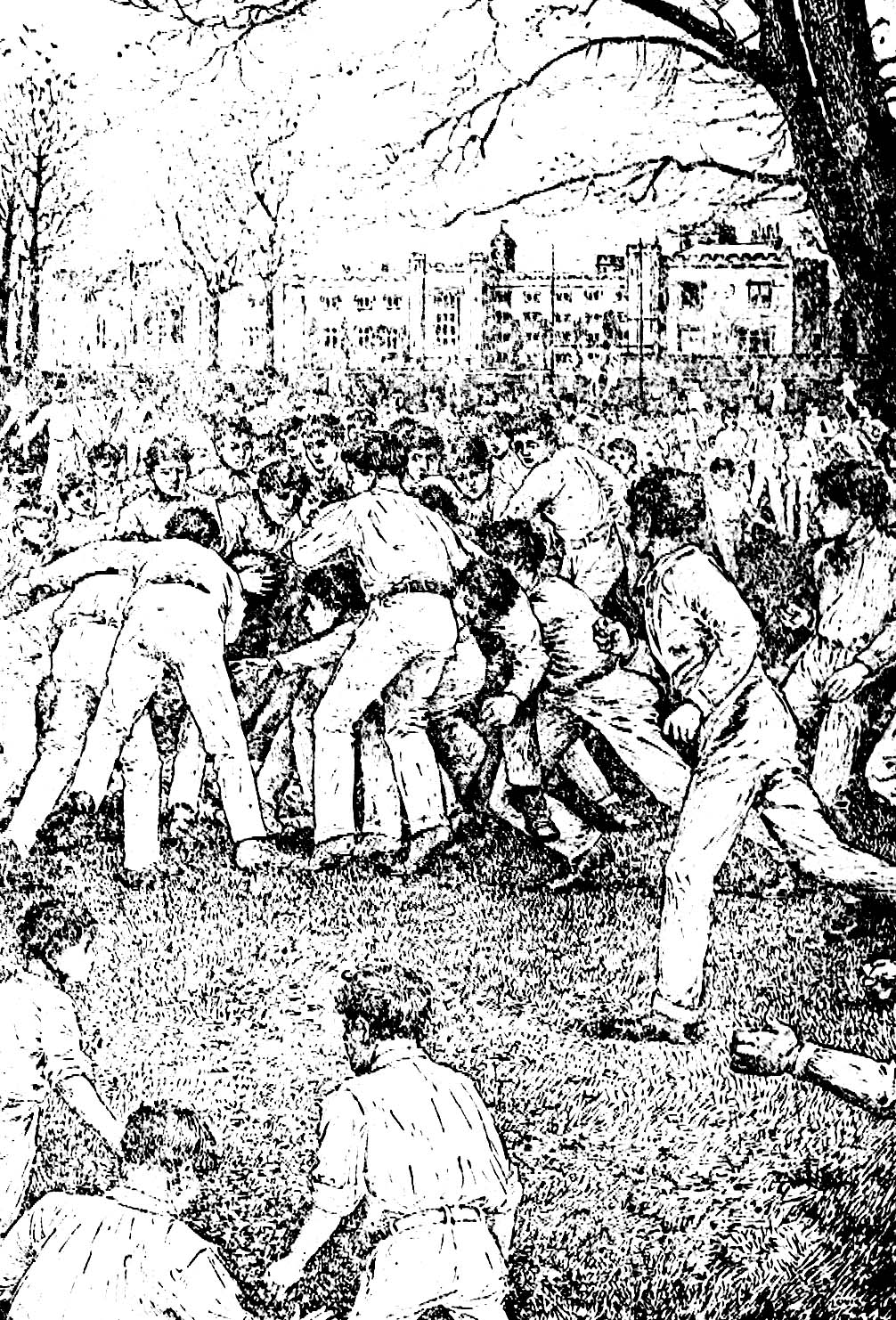 The one major lead that the society possessed was a published account of one particular schoolboy, by the name of William Webb Ellis, taking liberties with the rules in 1823, by picking up the ball and running when convention dictated he do otherwise. The letter, or rather two letters, had featured in the school's alumni magazine The Meteor in 1876 and 1880. Its author was a much respected local antiquarian and former pupil of the school by the name of Mathew Bloxam. There were however one or two problems with his account of Master Webb Ellis. Firstly it was not based on his own personal memories. In his letter he mentions the story having been relayed to him by an unnamed third party. Hoping that such a person might still be found the society began their investigation. No stone was to be left unturned during this exercise and a dozen or more former pupils of the school were contacted. Several of those began their own correspondence in a concerted effort to get to the bottom of it all. One or two of the respondents could recall Webb Ellis the pupil and one even recalled him being 'inclined to take unfair advantages of Football.' However, not one of those contacted recollected the famous act of 1823, nor heard any talk of it during their time at the school. More troubling there was a clear consensus amongst respondents that running with the ball remained illegal throughout the 1820s and much of the 1830s, before being legislated for, initially in 1841, and then again when the first written rules to the game were at last compiled by children of the school in 1845. It is perhaps a little surprising therefore that when the ORS finally published their findings in 1897 they concluded that 'running with the ball' was 'in all probability' a result of the actions of Mr W. Webb Ellis in 1823. Regardless the judgement was widely accepted and the school installed a commemorative stone in their grounds commemorating William Webb Ellis and his 'fine disregard for the rules of football'. But perhaps inevitably the curious discrepancies contained within the society's own investigation would, over time, arouse doubt. Eventually the Webb Ellis theory came to be referred to as the Webb Ellis myth. Sensing a conspiracy some historians went so far as to link the society's investigation with that other great event of 1895, the schism that lead to the foundation of the Northern Union. To understand how that might be true it is necessary to imagine the fallout in the immediate aftermath of the split. Initially there was a genuine fear that the RFU might not survive the rift and that the new professional body would quickly render the older body obsolete. As late as 1907 RFU Secretary George Rowland Hill voiced genuine concerns that the RFU would not survive if clubs in the Midlands defected. In light of this it has been surmised that the intention of the ORS was to solidify the link between rugby football and the school as a means of 'sign-posting' to all that rugby union was the game for gentlemen. In more recent years the debate has tended to crystalize into not one but two more practical questions that are often conflated. Firstly did Webb Ellis really pick up the ball and run in 1823? Secondly, if so, did this act originate the game of rugby football? On the first point, despite a lack of conclusive evidence the good reputation of Mr Bloxam is often put forward as evidence. Bloxam had first chronicled the actions of Webb Ellis in 1876 and then again in 1880. At that time rugby union was almost solely the preserve of the gentlemanly classes and there is no obvious ulterior motive for he, or another, to concoct such a rumour. On the second point many suspect that the question has been misconstrued. In 1895, as today, there were two major codes of football- one typified by kicking the ball, the other carrying- but this was not the case in 1823. At that time 'football' was a mish-mash of rules and conventions as they existed in schools and in local tradition in all corners of the United Kingdom. It is an easy but erroneous simplification to imagine that Webb Ellis invented a new game by picking up the ball during a game of association football but, since association rules were not even codified until 1863, this is impossible. To gain a clearer understanding of what was taking place it is necessary to reassess what was written in the original letters that comprised the ORS study (1895-97). There is an almost unanimous consensus that carrying the ball was illegal in the 1820s and remained so throughout the 1830s. Despite this many correspondents recall that it happened with regularity. One of the school's more famous sons, Thomas Hughes (author of Tom Brown's Schooldays), even goes so far as to nominate a boy by the name of Jem Mackie as one of the act's greatest proponents, noting that he was referred to as the great 'runner in' around 1838-39. Hughes (and others) also recall the ferocity with which the opposing team would seek to prevent their opponent from progressing with the ball in hand and Hughes goes so far as to say that should a boy be killed in the act, then a verdict of 'justifiable homicide' would likely be reached. Whilst Hughes' remarks are amusing they also contain an important truth. There were no match-officials at Rugby School (nor were there, initially, in the adult game until 1875). Therefore it was left to the boys themselves to administer justice and ensure that agreed rules were adhered to. If a Webb Ellis or Mackie should then take it upon themselves to break the rules their opponents were permitted to do everything in their power to stop them. As all modern rugby players know, the best way to stop a running man is to tackle him. Within the normal rules of the game at the time this wasn't permitted but as a means of law enforcement it seems anything was permitted, since a foul had already been committed by another. Could it therefore be that it was this particular act of law enforcement - opposing players by employing any means available to them to bring down a running man - that gave rise to the development of rugby union's more distinctive features? If so it might just be that the schoolboys decided between them that they preferred this passage of play as much, or more, than traditional features of the game and so accepted it. In addition to Hughes' comment, Henry H. Gibbs (Lord Aldenham) made this observation during the 1895-97 investigation:

'…anyone who practised it (running-in) set in more active motion the legs of his opponents for the purposes both of running and 'hacking,' using the latter as upon hostem humani generis; but if he escaped, it was all fair.'

Taken together with Hughes this comment describes the unrestrained physicality involved in preventing an opposing player running with the ball and it seems that this was the preferred method of enforcing the laws of the game. Crucially though, Gibbs then goes on to state that should the offending player escape 'all was fair', implying that the game continued as if no offence had taken place. 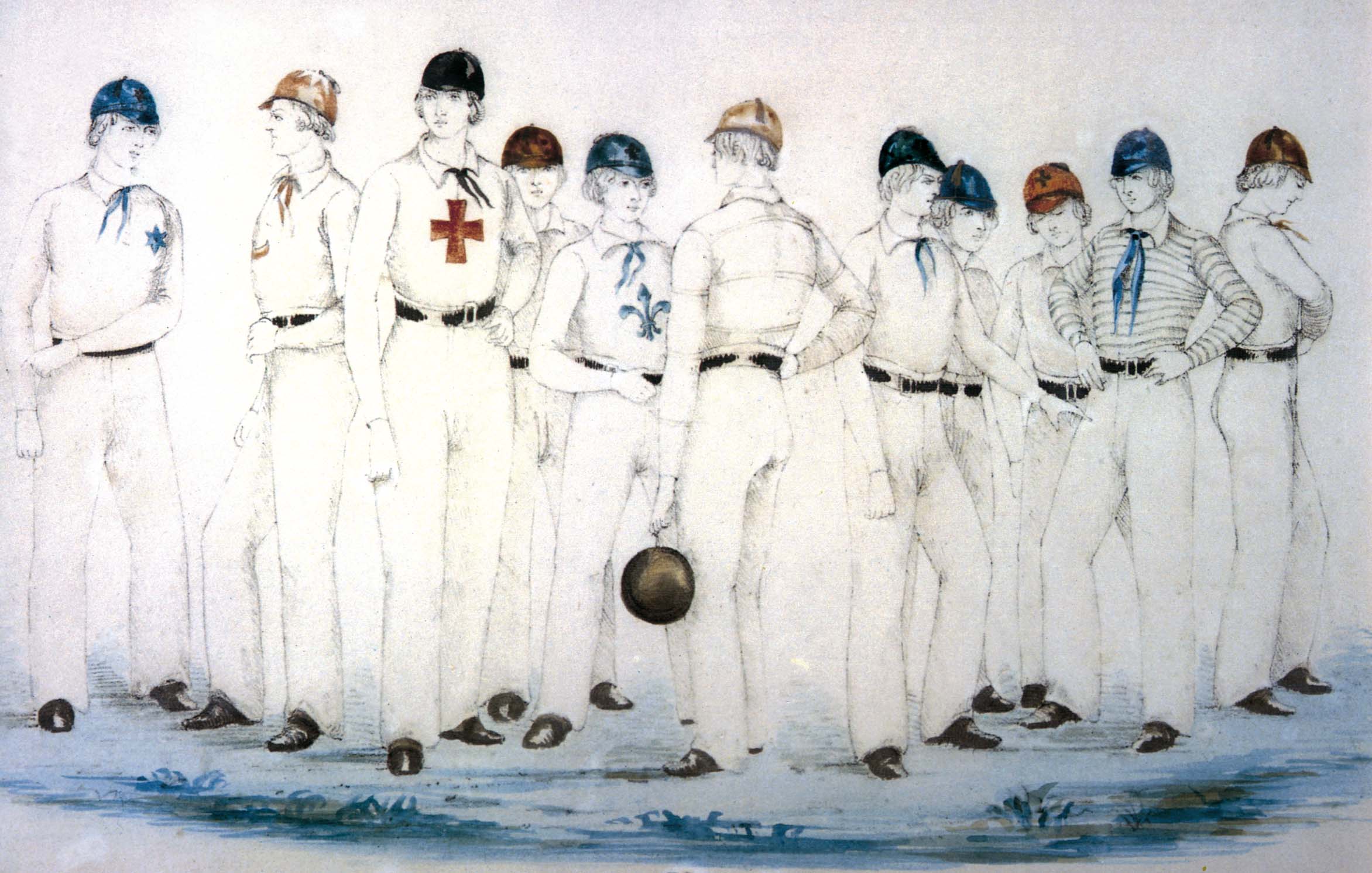 With this remark we hear described the transition- from an act of law enforcement to a recognised passage of play- that must have occurred at some point prior to 1841. By the early 1840s it is to be assumed that running with the ball in hand, whilst opposing players attempted to tackle you, was a recognised feature of the game- and not mere rule breaking as it had been in earlier years. If this were true then maybe the likes of William Webb Ellis and Jem Mackie really did originate the game of rugby, not through a single act of miscreant innovation, but by bending the practice of Rugby's football from one code of practice to another.