The title of the 1992 Middlesex Sevens Final programme on page 19 read in bold: WESTERN SAMOAN APPEAL.

"Few people in the British Isles are aware of the disaster that has befallen Western Samoa. On 7th December 1991 the islands were hit by 'cyclone Val' with gusts up to 260k.m. per hour for four days. This caused the most devastating natural disaster to strike Western Samoa in over 100 years. What was the net effect? All this hitting the Islands with a GNP of only £60 million per annum!"

What was this information doing in a rugby programme for the Middlesex Sevens Finals at Twickenham? 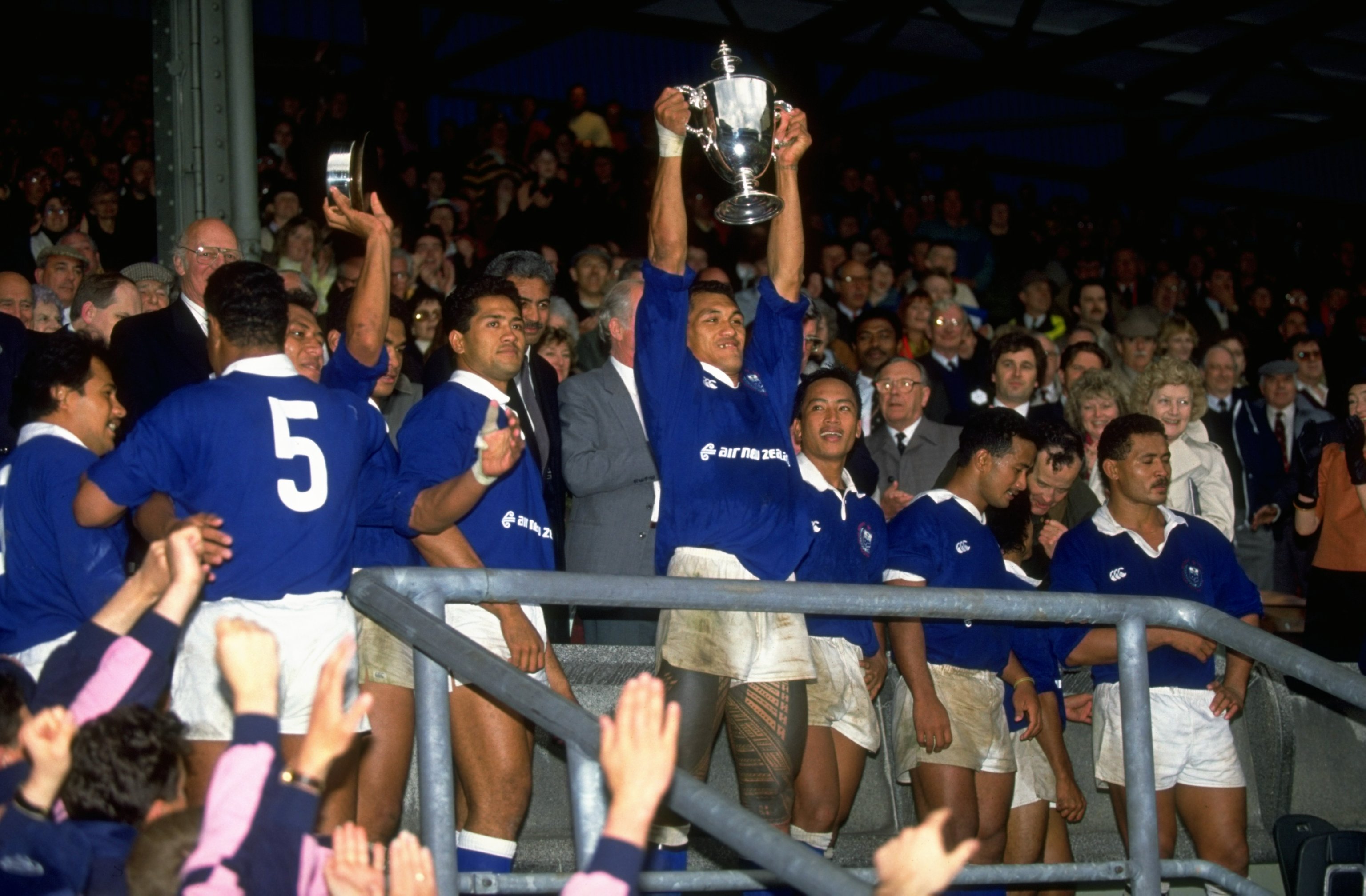 1992: The Western Samoan team collect the trophy after winning the Middlesex Sevens at Twickenham in London. Mandatory Credit: Mike Hewitt/Allsport

An initiative was created in the United Kingdom to 'Pass the Ball for Samoa', an appeal aimed at the rugby community in hopes of raising funds to aid Western Samoa's rebuild. A team of Western Samoan rugby players were sponsored to visit on a short tour of England to help promote the appeal. The team were invited to play in the London Floodlit Sevens, Caldy Sevens, Benidorm Sevens and the Middlesex Sevens. In spite of jetlag, limited kit and supplies, the Western Samoan's were determined to impress on the pitch. This tour could not have been achieved without a number of key individuals in the UK. One of those was Peter Smith, a lifelong member of Rosslyn Park Rugby Club and subsequent member of the Club Committee. In a report he wrote in July 1992, Peter details the lengths he and many others went to to ensure the success of the tour and fundraising efforts. On 1st March 1992, Mark Barker of Barwell Sports Consultancy contacted Peter Smith explaining the decimation of Samoa from Cyclone Val a few months earlier. It was time for action. Due to publicity Western Samoa received in the 1991 Rugby World Cup, it was decided that rugby would be a great way to fundraise for the islands in the UK. An international match was deemed not possible, so Mark and Peter decided to work on pulling together a rugby sevens tour. This would operate in conjunction with the 'Pass the Ball for Samoa' campaign, which would focus on passing collection boxes shaped as rugby balls around the crowd at different rugby games and events. T-shirts were also designed with the slogan and prizes raffled at rugby clubs. The plan was set into motion. All Peter had to do was plan a rugby tour in under two months… What are the essential elements of a tour? Peter asked himself. He broke the process down into the following key elements:

''Having obtained a list of all the Sevens tournaments I decided to aim for the London Floodlit Sevens at Rosslyn Park F.C. on 29th April, Caldy Sevens on the 3rd May and ambitiously for the Middlesex Finals at Twickenham on 9th May". Another team had just pulled out of the London Floodlit Sevens, so the Western Samoa side were in. The Chairman of the Caldy Sevens, Alan Jeffcoat, 'being a decisive and compassionate man' immediately said yes to the Western Samoan entry to their tournament. The Middlesex Sevens tournament was a maybe. Whist Chairman Derek Mann was very receptive to the idea, he had just written to a New Zealand club offering a place in the tournament. A South African side were originally due to enter, but had pulled out. There was a place available in the tournament for the Western Samoans, but only if the New Zealand club declined the existing offer. They accepted. Peter started negotiating, and before he knew it, the New Zealand club had graciously withdrawn from the tournament to make way for the Western Samoan team in support of the Appeal. 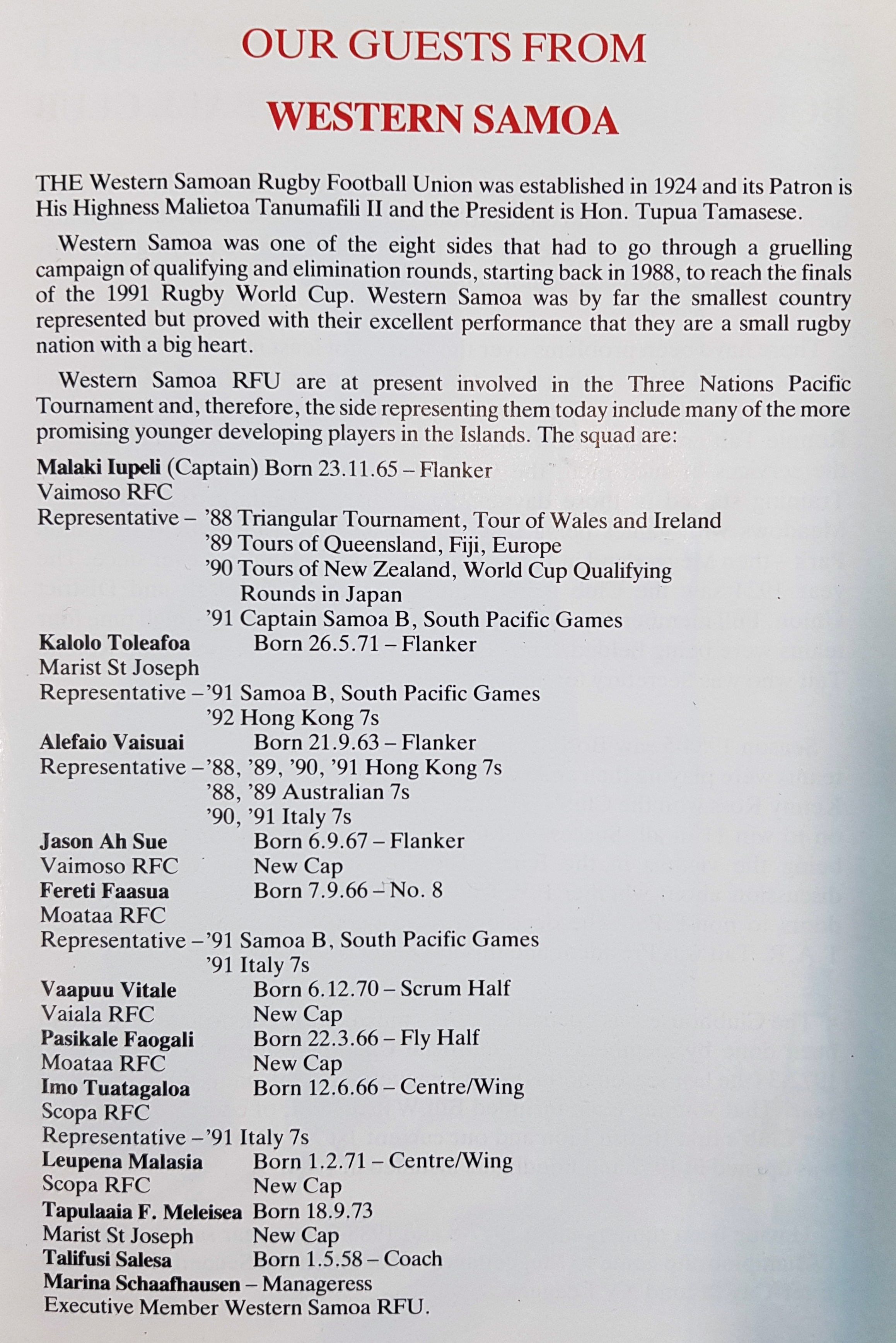 Air New Zealand donated half the cost of the airfares for the team from Samoa to England. The only problem was that the flights were absolutely full in the lead up to the tournaments, meaning that they wouldn't be able to get the players to London until 27th April - two days before their first match. Upon arrival, the team made their way to Kneller Hall, directly next to Twickenham Stadium, which would be the teams' home for majority of the trip. Their first tournament was the London Floodlit Sevens at Rosslyn Park FC. After a slight mix up with the kit provided, the Western Samoans were delivered their shorts and socks at the eleventh hour by a member of the Cambridge University side they would later play. Western Samoa defeated Cambridge University to make it through to the semi-final. They then took on London Scottish, the ''outstanding winners'' of the National Sevens tournament the previous week. Peter notes that, ''although it was the closest game London Scottish had for a long time Western Samoa lost 22-16 and Scottish (eventually) went on to win the tournament''. Regardless of the loss to London Scottish, it was a win for the Samoans. The team had performed well whilst jetlagged; £400 had been raised in the raffle for the Disaster Appeal, along with an additional £760 from ticket sales and £576 from t-shirt sales. Next, the team travelled to Liverpool for the Caldy Sevens. Their first match on the Sunday was against Chester, the winners of the Saturday competition. Western Samoa defeated Chester, then High Wycombe and Broughton Park comfortably. Stealing victory from Rosslyn Park 18-16 top make their way to the semi-final, Western Samoa then lost to Bristol 10-8. In the end, the competition was won by a strong Fiji side whom Western Samoa would eventually meet in the Benidorm Sevens. £1,221 was raised from the event at Caldy, demonstrating the kindness and generosity pouring in from the rugby community. 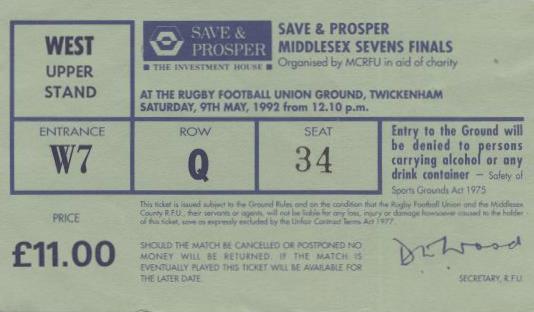 It was then time for the grand finale -the Middlesex Sevens at Twickenham Stadium. After defeating London Welsh and Orrell in style, Western Samoa was through to the final against none other than London Scottish. Peter recalled the exciting game: "From the kick-off London Scottish found themselves constantly under pressure whenever they got the ball and it was not long before Alefaio went over for the first of his two tries". By half time the score was 18-0 in Western Samoa's favour. At full time, Western Samoa had annihilated London Scottish 30-6, becoming not only the first international side to compete in the Middlesex Sevens, but also the first international team to win the tournament. The crowd went wild:

"Now chaos ensued as the crows rushed onto the pitch and swamped the players…Gradually they appeared and then assembled for Malaki to lead them up the steps to collect the Russell Cargill Memorial Cup, the first side ever from overseas to win it…Western Samoa had brought a little magic to the Middlesex Sevens."

In total, Middlesex CRFU donated over £33,000 to the Appeal Fund. The other collections from rugby matches and sales of t-shirts brought in an additional £16,000, providing a significant contribution from the rugby community to rebuilding the Western Samoan islands.

Rugby in the Middle East by Richard Thom

Rugby in the Middle East was a surprising phenomenon. Its beginnings from the sand pitches for which it is famed now stand as a testament to the spirit and ingenuity of the players that embodies the game in this region...
Read More

The Rugby Almanack of New Zealand was first published in 1935 containing details of New Zealand first class rugby matches from the previous year. The Almanack has continued to be issued ever since then covering every subsequent season of New Zealand rugby...
Read More