17 December 2018
The Rugby Club that Volunteered

Keith Gregson, Sunderland RFC's archivist and historian has, through a combination of knowledge, effort and luck, pieced together the wartime records of all 45 rugby players who were selected to play for Sunderland RFC 1st, 2nd and 3rd XVs on 17 January 1914 - just over 6 months before the outbreak of the First World War. This is an abridged introduction to the full work, Can you do nothing to mend my broken heart? THE ASHBROOKE BOYS - A SPORTS CLUB AT WAR (1914 -18) which is available to purchase. 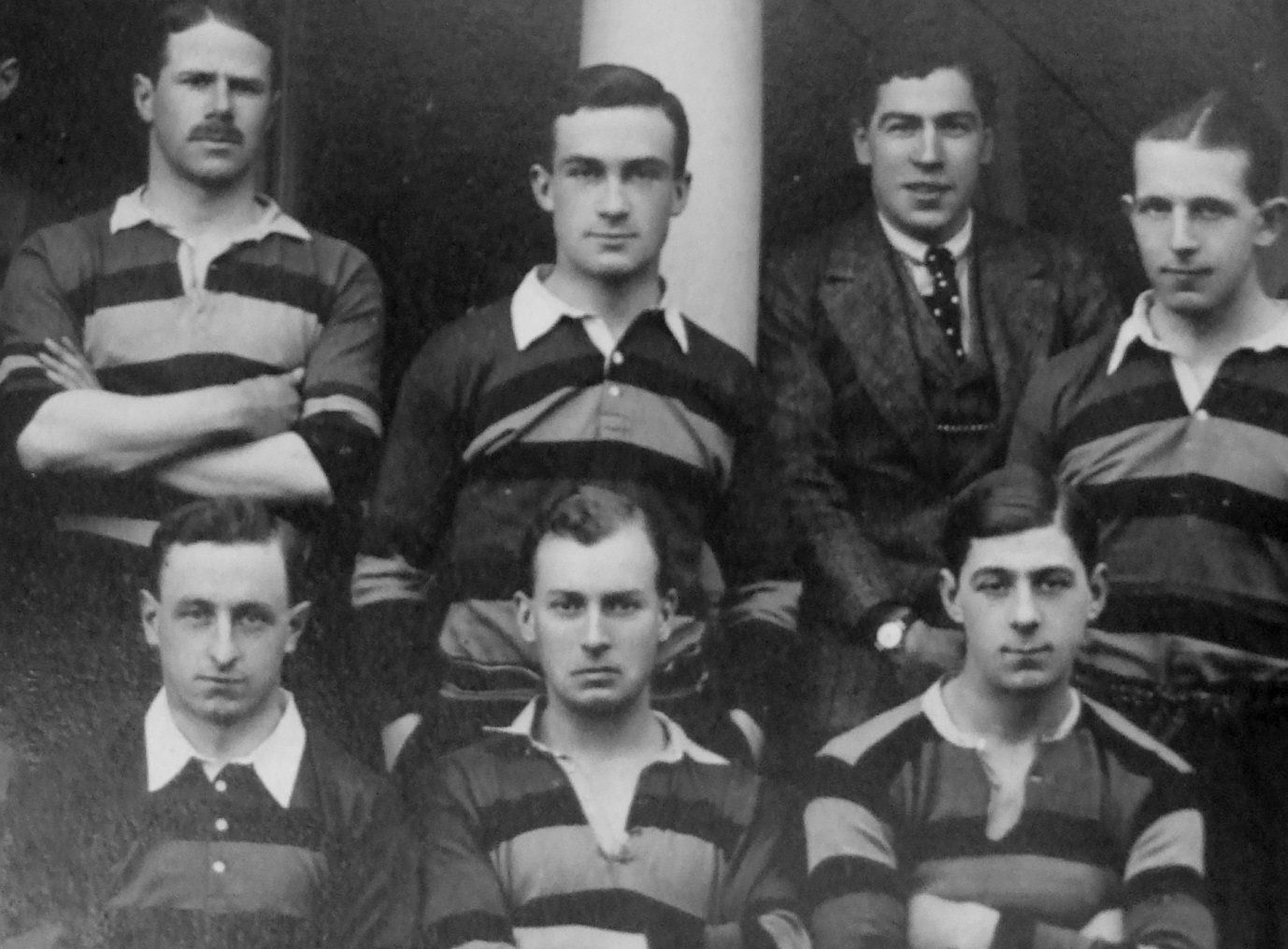 On that particular Saturday Sunderland Rugby Football Club (SRFC) 1st XV played Monkseaton 1st XV at Sunderland's Ashbrooke ground while the 2nd XV reversed the fixture. The 3rd XV was due to travel to Durham City to take on Bede College. Of the 45 chosen to represent SRFC on 17 January 1914, twelve died as a result of the war. In his excellent book on Ronald Poulton, the England rugby star who died during the war, author James Corsan notes;

'Junior officers were enduring similar deprivations as their men and leading from the front. According to the statistics, during the First World War one in every seven British army officers was killed, compared to one in eight other ranks. Among old boys of public schools, and indeed Oxford and Cambridge universities, the rate was as high as one in five'.

With this in mind, the losses to SRFC can be viewed as considerable. Eight of the twelve were junior officers. Though two of the privates died as a result of the same action, the remaining deaths were spread across the war years. In addition there is evidence of at least 15 of the survivors suffering as a result of injuries or illnesses contracted while on active service. 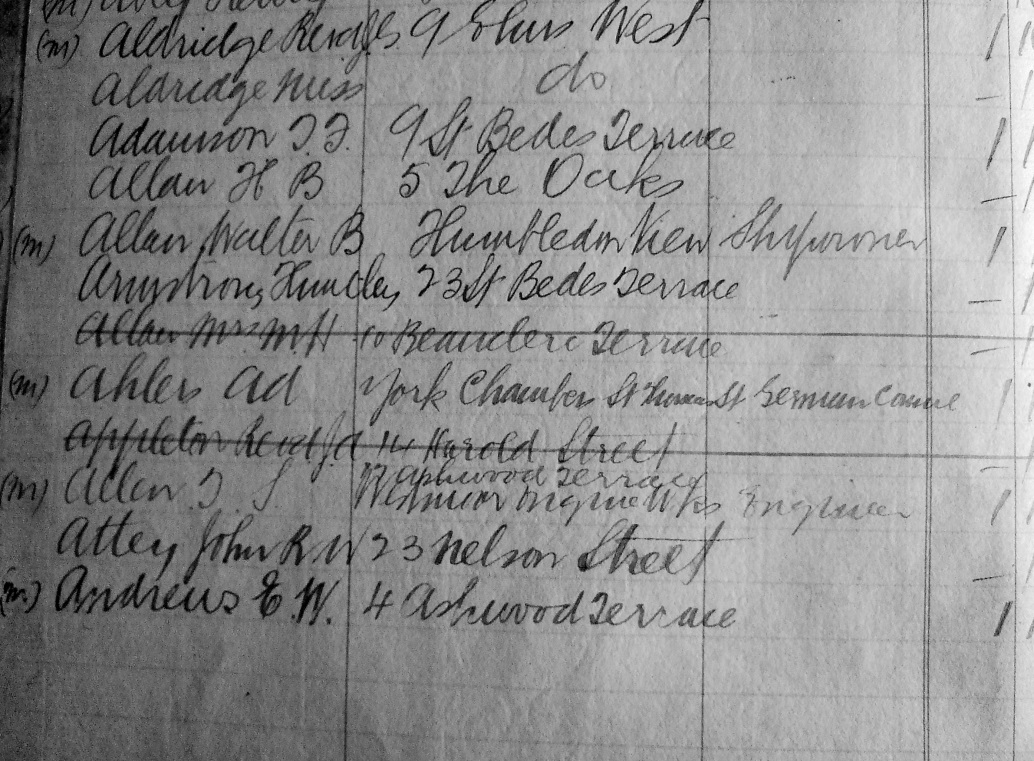 A significant number of the 45 served in the territorial 50th Division established in the first decade of the twentieth century to serve north east England. The 7th Battalion of the Durham Light Infantry (DLI), was Sunderland based and part of the 50th Division Infantry. It traveled to the front in April 1915 under the command of Ernest Vaux - well known brewer and a long standing member of SCFC. The following players from the 1914 sides were discovered on surviving medal roll lists for the battalion;

And there may have been more who signed on initially as privates and then moved on. Seven of them became junior officers - mostly during the establishment of the 'new army'. By February 1915, 19 of the officers of the 7th DLI were members of the wider SCFC. The two who died, Todd and Corder, played rugby and cricket together and died as a result of the same action near Ypres in Spring 1915. They also batted together at 8 and 9 in the last cricket match of the 1914 3rd XI season which was played after the actual declaration of war. Another element of the 50th Division was the County Durham based 3rd Northumbrian Royal Field Artillery which contained seven officers linked to the 18 February rugby matches. Five of these - Carl Ranken, Ronald Harrison, Norman Vaux, Stanley Nicholson and Charles Common - were commissioned in October 1914. Stanley Milburn had already been appointed a fortnight after the start of the war while Herbert Todd was long serving as a territorial and acting as orderly officer. A further ten members of the wider SCFC were also officers in the 3rd Northumbrian RFA by February 1915 including the brothers of Stanley Milburn and Stanley Dickinson. More significantly perhaps the medical officer for the entire 3rd Northumbrian RFA was Dr David Fee Todd - ex Sunderland RFC player and the rugby club doctor during the seasons before the conflict. The 50th Division was on exercise in North Wales when war broke out and immediately returned to the north east. It is highly likely that other club members were serving in other areas of the division - engineering, medicine and transport. Charles Pickersgill, for example, was with the 7th DLI and his cousin Frank was in charge of one of the Divisional batteries. Evidence points to as many as 38 out of the 45 serving as officers - mostly 2nd lieutenants, lieutenants and captains - at some point during the war. In some cases, it may be argued, this might be on account of their being known personally to their military superiors. Officers' records (and over 20 of theirs has survived) suggests that both education and social class had a significant role to play in their selection. In terms of education, the main secondary schools of 35 of the 45 have been uncovered. Approximately half of the these went to school locally - and to three schools in particular. At least seven attended the small private Argyle House School a few minutes walk from the Ashbrooke ground. This was owned and run by the father of the rugby playing brothers Willam and James Hanna. Five went to the private Sunderland Boys' High School and another five to the grammar school - Bede Collegiate. Others attended public schools including Durham, Sedbergh, Uppingham, Denstone, Greshams, Glenalmond and Haileybury. Two attended Dame Allan's private school in Newcastle. 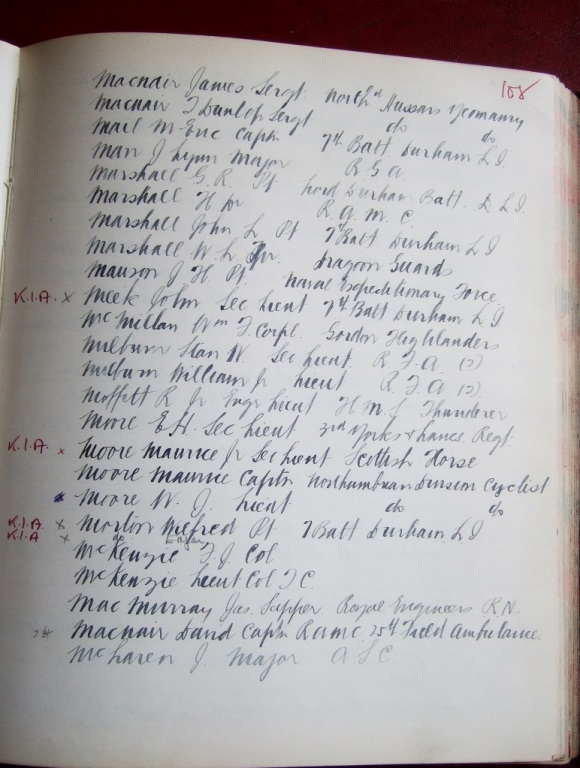 Almost to a man those who played for the club came from the middle and upper middle class. In 1914 most of them were in their early to mid 20s and still in training or fresh from it. In 44 cases occupations are known. Twelve were involved in engineering - either marine or mine. Six worked in other areas of shipping - building vessels, owning vessels and shipbroking. Eight worked as clerks -mostly in banking and a further seven were involved in medicine and law. Those who survived the war often went on to success in the world of work. Pickersgills and Bartrams were well known shipbuilders, Milburn an architect with an international reputation and Bulman a pioneer in the field of military aviation. Their social standing is backed up by their addresses, most of which are known thanks to the survival of the relevant membership book. Five members traveled into Sunderland to play while another five lived north of the River Wear - (Ashbrooke lies to the south). The remaining 35 lived in the Ashbrooke area or relatively close by and the majority could walk to the ground within ten minutes. The houses in which they lived were for the most part large Victorian or Edwardian terraced houses or semi -villas. Some of these stood (and still stand) in private tree -lined parks. While these observations may not set in stone what happened in every rugby club in the 'allied world' which produced volunteers in 1914, they might at least add to our knowledge of sport and the First World War and assist other club historians as they delve into their club's own war experiences. About the Author - Keith Gregson is a Sunderland-based semi-retired freelance writer, historian and musician. He has written numerous books about the history of sport including 'One Among Many', 'Sporting Ancestors' and 'Australia in Sunderland'. Details of his work can be found at keithgregson.com and his books can be purchased from Amazon.