A new installation has opened in the World Rugby Museum highlighting the development of rugby in Yokohama and the history of rugby at the Yokohama Country and Athletic Club, now recognised to be the first football club in Asia. 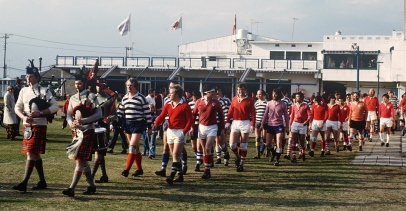 Interport match at the Yokohama Country and Athletic Club, 1976[/caption] By focusing on the first 50 years of rugby in Yokohama, this exhibition explores how Yokohama became the founding place for rugby in Asia and how the sport first developed. 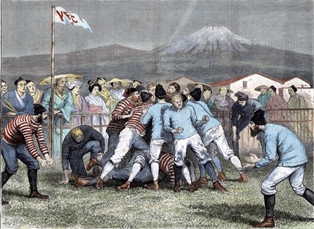 A Japan Times newspaper article reveals how Yokohama Foot Ball Club began on January 26, 1866, following the opening of the country's borders to people, trade and ideas in the 1850s, after centuries of isolationism. 18 years later, an amalgamation of the key sports clubs in the city saw the establishment of the Yokohama Country and Athletic Club, which remains an active club to the present day. The Club has maintained a high standard of rugby prowess over the years and considers rugby XVs to be the 'the pride of the Club'. In 1899 two students of Japanese descent brought rugby from Cambridge University to Keio University, thus beginning the process of Japan developing as a rugby playing nation. Highlights from the exhibition include:

The exhibition is available for public viewing at the World Rugby Museum in Twickenham Stadium now until March 2017. With thanks to Japan Airlines, Yokohama Country and Athletic Club Yokohama Archives of History, Rhino Rugby, Keio University, Mike Galbraith and Reg Clark for making this exhibition possible. For further information please call the World Rugby Museum on 020 8892 8877 or email [email protected]