When we talk about our playing days we casually throw out words which suggest we were engaged in a sort of warfare. We talk about being down in the mud, the blood and the pain. We talk about digging in when the going gets tough. Such phraseology trips off the tongue easily when we're back in the warm bar with our mates, but for an awful lot of our predecessors at Richmond Football Club the words had a harsh and vivid reality. They knew real mud, blood and pain. And they knew tragedy and death. 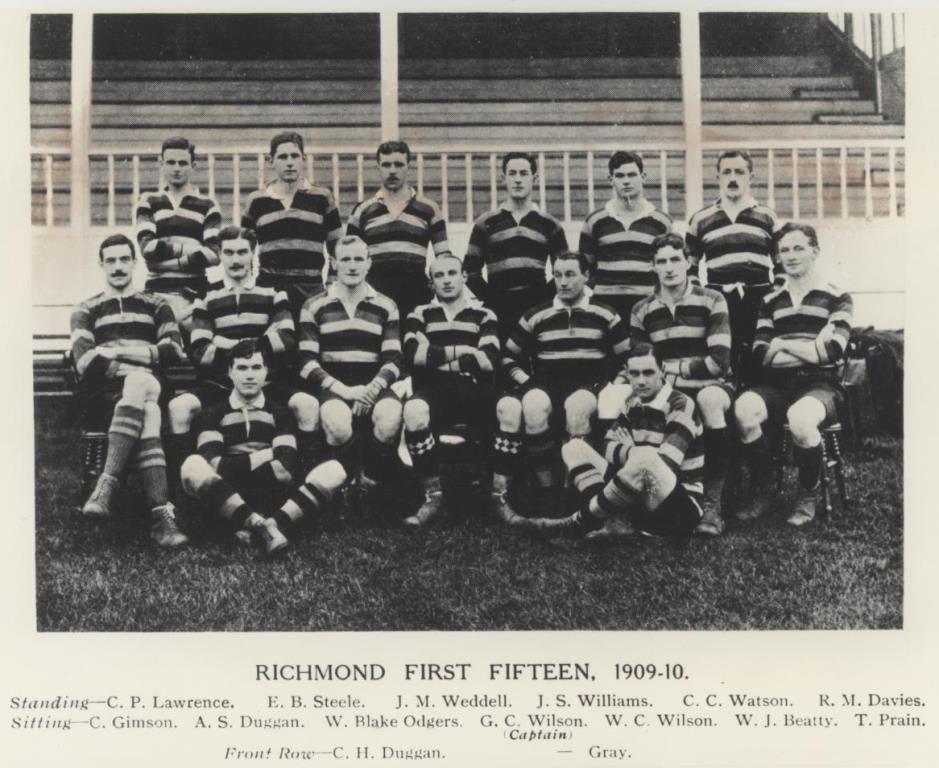 When, in 1914, Great Britain entered the First World War, a great many RFC players and members joined the colours. Almost certainly many of those who were eligible bought into the Lord Kitchener "Your Country Needs You" in some way or another. And although we don't know how many Richmond FC players actually went, a look at the Roll of Honour Board on the wall outside will tell you how many of them didn't come back. It will tell you how many never laced up their boots again, never pulled on the shirt again, never had another pint. Fifty nine names on the Board - four teams of RFC men killed in WW1, which meant an awful lot of missing faces in the bar come the Armistice, and a terrible bereavement to be shouldered by those left behind. On that board are two names who achieved international honours.

Harry Alexander was born in Cheshire in 1879 and went up to Oxford in 1897. A good all-round athlete he played against Cambridge, and for Middlesex, and for Richmond as a forward. He represented England seven times and captained them against Wales in 1902. He ended his playing days as RFC Captain in 1906. He was a schoolmaster who found time to be a county hockey stalwart, a scratch golfer and a first class ice skater. He was commissioned in the Grenadier Guards in July 1915 and traveled out to the conflict in October of that year. He was killed by a shell the same month, age 36, having been at the front for only thirteen days, and is buried at the Arras Road Cemetery, Roclincourt. Visit him if you're ever that way, and give him our regards.

Reggie Schwarz was London born in 1875 and educated at St Paul's and Cambridge, winning a blue playing halfback. He joined the Stock Exchange but it was his sporting prowess which brought him a large measure of fame. He played for Richmond and Middlesex and made his England debut against Scotland in 1899, getting two further caps against Wales and Ireland in 1901. He was also a cricketer of some renown, winning twenty caps for South Africa, having moved there in 1902, and being known as one of the finest bowlers of his age. He retired from cricket in 1912. 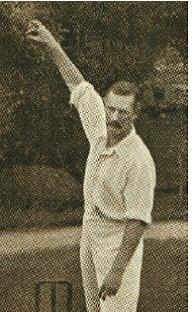 Reggie, after service in Africa, joined the Rifle Corps and went to France in 1916. By the end of the year he'd been wounded twice, become a Major, won the Military Cross and been Mentioned in Despatches twice. And even after all that it wasn't the Hun who did for him. He came down with flu the very day after the Armistice and died a week later, being buried in Etaples Military Cemetery. That must have been really tough, thinking he'd made it through the murderous carnage and that he had the rest of his life ahead of him. One of our sources is 'Richmond Football Club 1861 to 1925' by E.J.Ereault, in which he affirms that 76 members were lost in the Great War, thus contradicting the 59 listed on the Honour Board. But in any case either number should be reduced by one because R.T.Russell, who is listed, did in fact survive. Ereaut tells us that "the error is regrettable but the fact that it is an error has caused much happiness to all in the Richmond Club." Yet another source is the much treasured AGM Minutes Book, beautifully handwritten, and worded in a glorious style. The entry for September 3rd 1914 says "It was unanimously agreed to scratch all fixtures for the forthcoming season." (Except for the one in France, of course.) The next entry is dated 14th February 1919. "The Chairman undertook to insert an advertisement in certain papers that the Club was restarting next season and requesting that old members and players who wish to join communicate with the committee." And that's it - nothing about the missing years and the missing men. That silence is eloquent. The final word is with the then RFC President Mr. Edward Temple Gurdon, who, at the dedication of the Rolls of Honour Memorial said simply "It needs no words of mine to extol their sacrifice or commend them to your memory."

About the Author - Paul Grindrod was born and brought up in Rochdale, playing both League and Union. He moved to London to follow his career in the hotel industry, and his various postings saw him play in Germany, Italy and Spain, finally hanging up his boots at the age of 33. He has been an active member of Richmond Football Club for many years, living in the borough, and continues his business activities in the manufacture and marketing of sleep pods internationally.