After the annual Australian inter-varsity rugby competition ended in Sydney in 1990 the convenor reported that no trophies had been presented, '…the rugby trophy seems to be lost'. While a trophy was sometimes unavailable because the previous year's winner had failed to hand it on in time for presentation, this situation was especially curious as that year's host and winner, Sydney University, had won the prestigious winner's trophy, the Asahi, in Brisbane the previous year. Since then, until very recently, there had been no record of the whereabouts of the Asahi or indeed of the two other Japanese trophies. Although the 1990 participants didn't know it at the time, this was to be the last of fifty-two inter-varsity contests held under the aegis of the Australian University Sports Association , the first in 1926, and the forty-fourth since the Japanese trophies had featured in those contests so that, in retrospect, the absence of these glittering prizes was particularly regrettable. 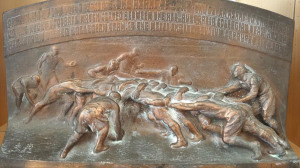 The Asahi, together with the Kansai Cup and the Kanematsu Cup, had been presented to the Australian Universities Rugby Union team which toured Japan and Hong Kong in 1934. The Asahi Trophy, a substantial bronze cast depicting a rugby scrum, had been awarded to the tourists on 11 February 1934, after they defeated an All Japan Collegiate team 18-8 at the Meiji Shrine Stadium. On the return journey by ship from Hong Kong to Brisbane the team decided to dedicate the Asahi for perpetual competition between the Australian Universities, the Kanematsu for competition between Adelaide and Melbourne Universities, and the Kansai for competition between Queensland and Sydney Universities. In August of the same year, at the inter varsity carnival held in Melbourne, the overall winner, Sydney University, was awarded the Asahi as well as the Kansai, while Melbourne University claimed the Kanematsu. Over time, as the number of competitors grew, other Universities became eligible to win the Kanematsu, which eventually became a Second Division trophy, but the Asahi remained the coveted reward for the overall winner. Sydney University were the most frequent victors over the remaining years, although (leaving aside several drawn contests) Queensland University won it five times, New South Wales three and New England, Western Australia and Adelaide Universities once each. It was only as the result of some diligent research that the Asahi was recently relocated, partly obscured in a display cabinet in the foyer of the Sydney University Sports and Aquatic Centre. About the Author - Ron Grainger is an independent researcher from Victoria, Australia. He has contributed several monographs to the World Rugby Museum archive, including 'Rugby Union in Victoria: The Early Years' and 'Rugby Union in Victoria: Between the Wars'. The World Rugby Museum would like to thank Ron for his contributions.