Over the next four years the World Rugby Museum will be describing the experiences of rugby players during the Great War (1914-1918). 128 full internationals lost their lives to the conflict, alongside thousands more players from local clubs, counties and representative sides. 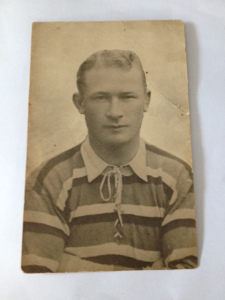 Bill Dalby, pictured here, was born in the Belgrave area of Leicester c.1890 where he would find employment in the shoe trade. He played as a Forward for Leicester Tigers and in 1912 progressed to regional representative level when selected to play for Midland Counties. During 1912 and 1913 South Africa were touring Great Britain and Ireland for the second time. The Springboks, featuring the likes of Paul Roos and Jacky Morkel, would secure victories against all of the Home Nation sides, becoming the first side to defeat England at Twickenham in the process. 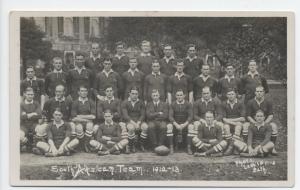 Along the way they defeated Midland Counties in Leicester but it was Bill Dalby who put up the stiffest resistance by scoring a try for the home side. Bill was already enlisted with the Leicestershire Regiment when War broke out in 1914 and reached the rank of Acting Sergeant. He was killed in action during the Battle of the Somme on 15/09/1915. He is commemorated at the Thiepval Memorial and St Peter's Church memorial in Belgrave, Leicester.

The World Rugby Museum would like to thank Bill's great-great-nephew Peter Muggleton for researching this article. If you would like to share your own research and family histories of fallen rugby players please contact [email protected].