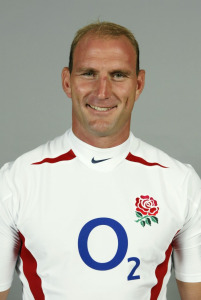 Lawrence Dallaglio, despite his Italian father, was brought up in England, and with his mother Eileen being half English and half Irish the former Wasps back row forward had a further choice to make. He made his England debut against South Africa as a replacement in 1995. Dallaglio could be accused of having 'tunnel vision' about Twickenham stadium, although it turns out to be 'tunnel love'. "I love being in the tunnel just before a game," said Dallaglio. "You do not have to walk too far to get out on to the pitch, but when you are in it you can see and hear the crowd, which is not always the case. You only have a couple of seconds and then you are immediately out there. That was always a pretty special place for me at Twickenham." Of course he remembers the baths, and Jason Leonard's thwarted attempt to make off with one when the old West Stand was demolished in the early 1990s. But it is not just the ground that are special to Dallaglio. He also appreciates the people who work there, in particular the groundstaff. "I have a lot of respect for the groundstaff," stated the former England captain. "They work tirelessly and they are good lads. They have always been helpful to me, unlocking doors, doing as much as they possibly can for me when I have trained at Twickenham. And they are always on hand to make me a nice cup of tea or coffee. They have always been brilliant." 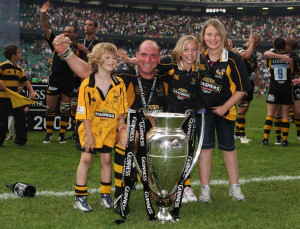 Naturally for someone with 85 England caps and whose club Wasps have also graced the stage at Headquarters on more than one occasion, Dallaglio has a veritable flotilla of memories of the ground. Oddly though one of his earliest memories is not as a player, but rather as a spectator. Dallaglio takes up the tale. "It was back in the days of the old Twickenham. It was 1991 and the Grand Slam decider between England and France. It was the match that had that try when Philippe Saint Andre scored at the end of a move which had begun under the France posts. "I was in the West Stand with the rest of the England Under 19 team. We had just played Italy Under 19 the day before at Cambridge [a match the Italians won by a point] and had been given tickets for the match. We were down near the touchline in our blazers and the noise was unbelievable. "Twickenham is a magnificent stadium now, but it was still very impressive then. I remember Brian Moore, the England hooker, coming over to take a line-out right in front of us, and he had to ask what the line-out call was a few times before he got it. The atmosphere was incredible that day." By 1991 though, Dallaglio was no stranger to Twickenham. "I have been coming to Twickenham since I was kid. I played for King's House School, my prep school, across the width of the Twickenham pitch in a mini rugby tournament and I scored a try then. "But going back to that game against France in 1991, England went on to win that game, and the Grand Slam, and that went a long way to making Twickenham a special place for me. It became something of a fortress in the late 1990s through to 2000, with memorable victories along the way against the likes of New Zealand, South Africa and Australia. 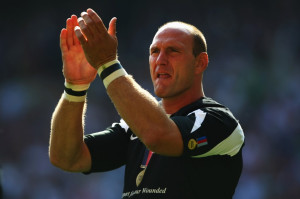 "So there have been lots of great days there for me with England, but I have to say that in a different, but remarkable way my last appearance at Twickenham was an amazing day, when I played in the Help for Heroes match. It was game that raised money for a worthy cause, watched by 55,000 people." But Twickenham has not confined it's specialness to representative games that Dallaglio has played in. "It has also been a very special place for Wasps." That is undeniable. On the first two occasions Twickenham was selected to stage the Heineken European Cup final, Wasps won the tournament. The first time was in the 2003-04 season when they beat the previous season's European Champions Toulouse 27-20; later that season club captain Dallaglio led Wasps to a unique Twickenham double when they won the Zurich Premiership final, by beating Bath narrowly. Wasps went on to beat Leicester in the Premiership play-off final the following season, a comprehensive 39-14 victory and the season after that they beat Llanelli in the cross border knock-out competition which was then known as the Powergen Cup. "I think we have only lost one final at Twickenham in my time," recalls Dallaglio, "and that was in 1998 when we were beaten by Saracens." All in all Twickenham has clearly been good to Dallaglio, even his last competitive match there left him on a high. That was in 2008 when Wasps recorded yet another Premiership final triumph, this one over Leicester. "If we hadn't won that game I probably wouldn't have retired," he says. But if Twickenham has been good to Dallaglio then he has certainly been good for the ground not to mention England and Wasps.